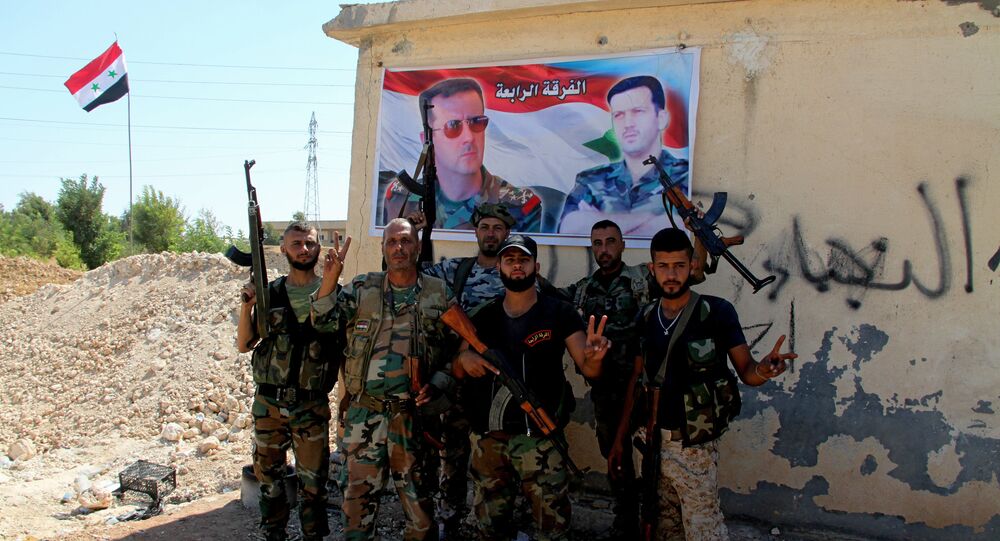 While a heated debate continues to simmer over Russia's draft constitution for Syria, Christopher Assad political observer of Syrian origin, told Sputnik that the constitution is likely to "restore real ethnic, religious, social and cultural harmony to the diverse sectors of Syrian society." He stressed that "Syria must avoid decentralization."

© Sputnik / Bolat Shayhinov
Next Astana Meeting on Syrian Settlement May Occur Mid-February
A series of Syrian peace negotiations launched by Russia, Turkey and Iran in Kazakhstan's capital of Astana is paving the way for political resolution of the ongoing conflict.

"The current peace process is aimed at reaching a peaceful political settlement between the negotiating parties. These include non-Syrian parties who have their national security concerns to address, in order to settle the geostrategic goals of all protagonists in that region in particular and globally in general," Assad told Sputnik.

"The Syrian people, military and political leadership would like more than any, to restore peace and stability to their country, but are fully aware that such cannot be done unless the enemies of the state stop their military, financial and logistical support to the armed gangs on the ground in the Syrian theatre," he stressed.

Meanwhile, some observers call attention to the fact that the so-called armed Syrian opposition is comprised of various groups backed by different foreign sponsors. The observers say that these fighters have no legitimacy on the ground. Why did the Syrian government decide to hold a dialogue with these groups? How does it affect the current situation?

"This is part and parcel of the Realpolitik the Syrian government has adopted since the onset of the insurgency. They had their door open for negotiations with any of the opposition groups, including the armed ones," Assad explained.

"President [Bashar] al-Assad, the Syrian leader, has [repeatedly] reiterated his unequivocal position with regard to achieving a political settlement in his public interviews. Basically a two-pronged approach; that of creating a government department that would facilitate the internal reconciliation process which would lead to settlements or mass amnesties and that of making it a priority to negotiate with all opposition groups, anytime and anywhere, in order to achieve a peaceful settlement of the crisis," the political observer emphasized.

Assad underscored that the Syrian President's position is in line with international law.

"The Syrian president's position is in full compliance with the relevant UN resolutions and the International laws and conventions governing armed insurrections against legitimate governments. The president has a moral and constitutional duty to defend the sovereignty and territorial integrity of the state he is leading," the political observer said.

The writer admitted that "the Syrian street" is currently divided over this issue with some people opposing the negotiation-amnesty process.

"The Syrian street is divided over this issue. Many people are against the negotiation-amnesty process, but there are those who in favor," he noted.

"In the end, the current strategy seems to be working and people are more optimistic than ever that a political settlement is indeed achievable, especially after the liberation of Aleppo the end of Obama's administration, and the obvious U-Turn in Russian-Turkish relations," Assad pointed out.

And what about Russia's proposed draft constitution for Syria? Is it possible that the creation of a new Syrian Constitution could ease tensions and pave the way for the resolution of the current crisis?

© Sputnik / Alexey Kudenko
Russia Did Not Impose Draft Constitution on Parties to Syrian Conflict
"The 'draft' constitution which got circulated raises more questions than it settles," Assad responded.

"It is not a secret that after the atrocities and international terrorism the Syrians and the world have witnessed in the past six years, Syria must [remain] a secular state. This eventuality is shared by many, but [it] is obviously rejected by some Syrians and most in the Middle East," he said.

On the other hand, those who have pan-Arab views are against removing the word "Arab" from the country's name — the Syrian Arab Republic.

"People who have pan-Arab nationalist leanings are objecting to the fact of removing 'Arab' from the name of the republic. It would be good to remind these people that this word, aside from not reflecting reality, did not exist when the modern Syrian state was created in 1919," the political observer emphasized.

The Kurdish issue has become yet another apple of discord.

"Then you have those who have what I call a 'Kurdiphobia', objecting to the very hypothetical 'autonomous communities' theory, which even the [Syrian] government has already agreed from the outset its willingness to discuss," Assad highlighted.

© AFP 2020 / Delil Souleiman
Female fighters from the Kurdish People Protection Unit (YPG) take a break on the front line in the northeastern Syrian city of Hasakeh on September 4, 2015.

Russia's draft mentions the establishment of "Kurdish cultural autonomy." The passage has prompted a heated debate among journalists and international observers.

Commenting on the issue, Al-Monitor highlighted that the issue of "Kurdish autonomy" remains the most controversial one for Syrians.

However, the media outlet failed to specify what the difference between "autonomy" and "cultural autonomy" actually was.

© AFP 2020 / Delil Souleiman
Hidden Struggle: Why Kurds 'Must be Kept Under the Roof of Damascus'
As a rule the NCA is implemented to ensure the rights of ethnic minorities and to protect their culture, language, national practices and traditions. The NCA does not apply to a particular territory but to all members of an ethnic minority group.

While the roots of the NCA concept go deep into history, the idea took on new significance in the beginning of the 20th century in the Austrian-Hungarian Empire. Karl Renner, a constitutional lawyer and Social Democratic statesman advocated the implementation of the NCAs to prevent the Empire's disintegration along ethnic lines and to protect the rights of ethnic minority groups under the roof of Austria-Hungary.

Since those times the concept has become part of international juridical practice.

In light of this the much discussed issue of Kurdish "autonomy" acquires a new meaning and eases fears over potential "federalization" or "disintegration" of the sovereign Syrian state.

In his interview with Sputnik Christopher Assad highlighted that potential constitutional changes could be adopted only through a nation-wide referendum.

"Given the ripples the tabling of this draft has caused, it should be noted that not only any constitutional changes would be subject to a referendum, but also that the Kurds do not form a homogenous community in any part of Syria," the political observer said.

"In addition to that the [Syrian] government is on record for allowing for cultural and administrative autonomy where the numbers warrant," Assad remarked.

"I must add a personal note, Syria must avoid decentralization," he stressed, "Here, I make the distinction between decentralization and 'autonomous communities'. They are not the same."

Meanwhile, some observers have rushed to claim that Damascus has already rejected Russia's draft or some of its provisions, citing remarks made by the head of the Syrian Arab Republic delegation, Bashar al-Jaafari, during the Astana talks.

According to Assad, such assumptions in fact have no basis.

"One thing that Dr. Al-Jaafari and three Guarantors, Russia, Iran and Turkey, have underlined is exactly what the Syrian government and people want: full sovereignty over the entire Syrian geography. The state will remain intact," the political observer highlighted.

"At the end of the day, the constitution remains a hot issue, but once adopted in the proposed format, it would be a blessing for Syrians and Syria as a whole, as it would restore real ethnic, religious, social and cultural harmony to the diverse sectors of Syrian society," he opined.

It is expected that the Astana talks would be followed by the Geneva negotiations at the end of February, 2017.

Can we expect a breakthrough during the upcoming Geneva talks?

"As you know, it all depends on whether [US] President [Donald] Trump will finally ease Russian/Syrian/Iranian fears and join in with them in fighting terrorism against Syria and Iraq by fully committing to coordinate and cooperate with the legitimate governments in these two countries," Assad concluded.

These are Turkey's Biggest Concerns Over Syrian Draft Constitution