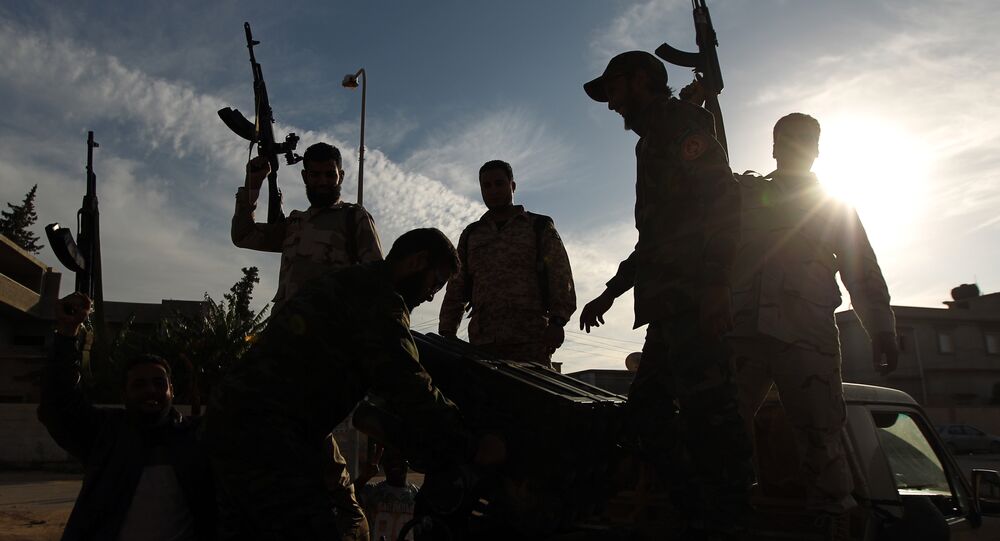 Putin and Trump Working Together in Libya? There's a Very Good Chance

Last week, EU leaders met in Malta, where they affirmed support for the Tripoli-based Libyan government, and approved the Italy-led plans to build refugee camps in Libya. But the US may have its own project for resolving the Libyan crisis, and could work to try and implement it together with Russia, says Israeli-Russian journalist Avigdor Eskin.

Friday's informal EU meeting in Malta focused on how to stem the flow of migrants from Libya and other African countries into Southern Europe. Ever since the French, UK and US-led military campaign to help militants oust Libyan leader Muammar Gaddafi in 2011, hundreds of thousands of migrants have made the perilous journey from the North African country to Italy, with 181,000 people arriving in the Southern European country in 2016 alone. Thousands have also died along the way.

Following their meeting, EU leaders signed the 'Malta Declaration', in which they agreed to "step up cooperation with the Libyan authorities," (i.e. the Tripoli-based government) to "significantly reduce migratory flows." Brussels' priorities include providing training, equipment and other support for Libyan coast guard and border control agencies. They've also prioritized efforts to improve the economic situation in the country, particularly in coastal areas, and the creation of refugee camps inside Libya itself to prevent would-be migrants from crossing the Mediterranean. Recently, the EU allocated another $215 million for the Italian-led effort to keep migrants from coming to Europe.

However, according to Israeli-Russian journalist and political analyst Avigdor Eskin, there are sources indicating that "the US President is preparing his own solution to the problems plaguing Italy and other European nations" through the migrant crisis.

© AFP 2020 / MAHMUD TURKIA
EU Cannot Return Migrants to Libya as Has No Partner in Country - Slovak FM
In a recent analysis for Russia's RIA Novosti news agency, Eskin wrote that "unofficial but reliable sources have revealed" that as soon as this week, "the first steps will be made to launch a new project on Libya's reconstruction."

Washington, the journalist noted, "is looking forward to working with Russia on this project on a partnership basis," with Italy and Egypt also expected to be involved.

Progress on a Russian-US agreement over Syria has helped serve to reinforce the idea of improving relations between the two countries "specifically via the reconstruction of Libya and its liberation from the Daesh terrorists," Eskin added.

The outlines of a US plan for Libya were first proposed last year by a collective of security and intelligence experts known as Jellyfish Inc., some of whom, including newly-named National Security Adviser Michael Flynn, have become key officials in Trump's White House, the journalist explained.

This mysterious intelligence firm, charged with working out a Libya plan, can help provide a framework for US government departments and private sector agencies which would be charged with implementing US policy. Jellyfish Inc's plans, Eskin noted, involve the creation of micro-cities, set up in coastal zones adjacent to already-existing settlements, consisting of between 20,000 and 50,000 people. "These areas would see the construction of oil refineries, and infrastructure providing for a decent life," the journalist explained.

© REUTERS / Hani Amara
Italy Notes Russia's Desire to Cooperate in Libyan Crisis Resolution
Eskin stressed that these cities would have "little in common with refugee camps" of the kind proposed by the EU.

"We're talking about small towns, conforming with European standards. One of their main objectives would be to prevent Libyans' continuing exodus to Europe, and in the future, to see refugees come back home."

Eskin suggested that the idea been approved by General Flynn, and "fully corresponds with the administration's policies." Furthermore, a more detailed planned has been presented and approved, according to the analyst.

The main question now, Eskin wrote, is whether "Russia will want to work with the Americans in Libya." After all, he noted, "whereas the funding plans have already been elaborated, an agreement with Russia has yet to be reached."

According to Eskin, Russia's interest in Libya is "above all connected to its historical ties with the country, together with its recent successes in promoting its interests in the international arena. The Libyan disaster resulted in considerable losses for Russia. The new administration in Washington believes that the desire to regain influence and to offset its losses may persuade Russia to engage in mutually beneficial cooperation with Washington in the devastated country."

Washington's desire for cooperation is also understandable, Eskin added, given "the need to protect against Daesh and other radicals, and Russia's unique and successful experience in this regard," particularly in Syria.

© AFP 2020 / THIERRY CHARLIER
EU Foreign Policy Chief Slams Trump's 'Walls and Bans', While Calling for Partnership
"The plan for Libya's reconstruction does not imply the introduction of an American or Russian military contingent," the journalist stressed, but rather the creation of "private entities, which will be present to defend the micro-city communities. It can also be assumed that Washington is dismayed over seeing part of Libya's oil [industry] in the hands of extremists. This reminds it of the previous administration's participation in the destruction of Libyan statehood."

"Incidentally, Eskin noted, "before the start of the civil war, Libya produced over 1.6 million barrels of oil a day. Now it produces barely 700,000 barrels, even though the country remains an oil giant, and has the largest proven oil reserves in Africa."

With all this in mind, the analyst concluded that the question now is "whether Libya can become the catalyst for the beginning of a Russian-US thaw?"

Commenting and expanding on Eskin's piece, Bloomberg international relations commentator Leonid Bershidsky wrote that prospects for cooperation exist, but would require Trump to break from Europe in its support for the Tripoli-backed Government of National Accord in favor of the other major power in the country, the Tobruk-based government supported by Libyan National Army commander Khalifa Haftar.

Libya could very well become the scene of a rivalry between Brussels and Moscow, the journalist argued, adding that "Russia could suddenly turn [to] Trump, who could turn to Putin." Moscow, the analyst suggested, prefers Haftar to the Tripoli-based government, in part because the former does not rely on the support of Islamist groups. Haftar, he added, had "chased Islamist fighters out of Benghazi and the surrounding areas and took over Libya's key oil terminals from [Western-backed] forces last September, boosting the country's output."

"The Kremlin has been cultivating a relationship with Haftar," Bershidsky added, pointing to the general's visit to Moscow late last year, and his visit to Russia's Admiral Kuznetsov aircraft carrier in January, "where he held a teleconference with Russian Defense Minister Sergei Shoigu" regarding the fight against international terrorism.

Bershidsky noted that if Russia provides more support for Haftar, including weapons and maybe even sets up military bases, the EU's agreements with the Tripoli government would be under threat. Eskin, for his part, believes that any such deals are probably out of the question, given Moscow's long-standing suspicions that Haftar is a CIA asset. Furthermore, Moscow abides by the UN agreement prohibiting the provision of weapons to the war-torn country.

Nevertheless, Trump, according to Bershidsky, has "major reasons" to support Haftar over the Tripoli government, with his suspected CIA connection also playing a role.

Just as importantly, "Trump [was] highly skeptical of then-Secretary of State Hillary Clinton's actions in Libya" (including US airstrikes against the Libyan army in support of anti-Gaddafi rebels). Moreover, "like Putin, [Trump] doesn't believe in imposing democracy on Middle Eastern nations where Islamist groups enjoy popular support."

© AP Photo / Alexander Zemlianichenko
Trump or Putin? EU Loses Plot on Biggest Threat
Ultimately, Bershidsky suggested that while the plan outlined in Eskin's article may sound like wishful thinking, it is possible that Moscow may "approach the Trump administration with offers of pacifying Libya and thus weakening the Islamic State [Daesh]." Washington, Bershidsky argued, "wouldn't even need to do anything except turn a blind eye to Russian support of Haftar."

"If Trump's isolationist team is willing to cut its risks and outsource at least part of its promised fight against Islamist terrorism to Russia, an understanding on Libya is a possible first step down that road," Bershidsky concluded.

Mogherini Slams Trump's 'Walls and Bans', While Calling for Partnership