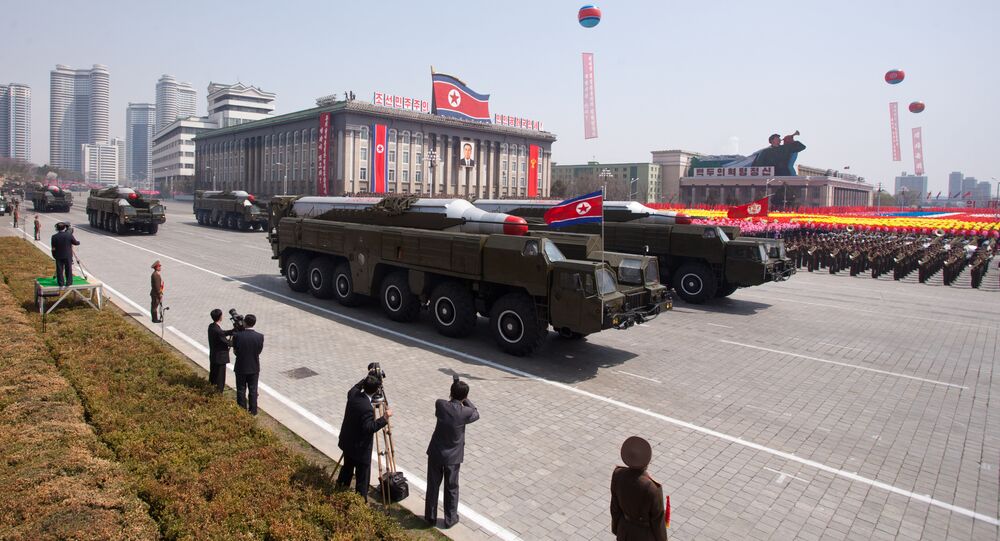 On Friday, speaking in Seoul, Secretary of Defense James Mattis warned North Korea that it would face an "effective and overwhelming" response if it used its nuclear weapons against US allies. Speaking to Radio Sputnik, military analyst Viktor Baranets said that rhetoric aside, little seems to have changed in the US's approach to Pyongyang.

© REUTERS / Staff
Pentagon Chief Says Pyongyang's 'Provocative Behavior' Only Reason Behind THAAD Deployment in S Korea
Paying a two day visit to South Korea Thursday and Friday, the newly minted Secretary of Defense went to the country to try to assure Seoul that they had Washington's support. "Any attack on the United States, or our allies, will be defeated, and any use of nuclear weapons would be met with a response that would be effective and overwhelming," Mattis said Friday, speaking to reporters after talks with South Korean Defense Minister Han Min-goo.

During the press event, Mattis confirmed that the US would be deploying its Terminal High Altitude Area Defense (THAAD) missile defense system in South Korea later this year, in accordance with agreements going back to the previous administration.

Pyongyang called the plans for the THAAD deployment a provocation and warned that the move would push the Korean peninsula to the "brink of nuclear war." The North Korean Central News Agency said Friday that the system's deployment was a "plot" by Seoul and Washington to stage a "preemptive attack on the North."

North Korea has engaged in nuclear weapons testing since 2006. Last year, Pyongyang conducted its fourth and fifth tests, along with two missile tests, one of which was launched from a submarine. In August, 2016, Pyongyang claimed to have successfully tested an engine for a missile capable of striking the continental United States. Russian defense analyst Vladimir Khrustalev recently told Sputnik Korea that he estimated that Pyongyang would be able to acquire a nuclear-armed ICBM in approximately two years if it conducts about five tests a year.

© AP Photo / Ahn Young-joon
South Korean Military 'Eagerly' Agrees to Work With US Around-the-Clock
Throughout last month, South Korean military officials predicted that North Korea could stage another missile test at any moment, including after acting South Korean President Hwang Kyo-ahn and Donald Trump spoke over the phone about the ways Seoul could defend against an attack from the north on Monday.

Speaking to Radio Sputnik about the stalemate in the region, retired colonel and military observer Viktor Baranets pointed out that even with a new president in the White House, the relationship between the US, its allies and North Korea has remained the same as it was under Obama. At the same time, he said, the ongoing tensions have broader strategic implications, particularly for China.

"The Americans only needed a pretext to deploy their missile defense system in the region. North Korea has served as that pretext, with Washington and Pyongyang seemingly simply unable to reach an agreement," Baranets noted. "The US did a great deal to try to penetrate North Korea's nuclear and missile complex, some agreements were made; the question was being decided at the level of the UN Security Council."

Unfortunately, the analyst noted that Washington just can't seem to agree to sit down to the negotiating table with Pyongyang. "Instead, the United States, together with Japan and South Korea, continue to walk on the razor's edge, [staging exercises] along North Korean territorial waters, or irritating the [Chinese] dragon. Just consider how many sanctions have been imposed on Pyongyang, how many warnings have been given!"

According to the analyst, the new administration is taking exactly the same approach to the North Korean nuclear problem as the old one. "Right now, we're seeing that while Washington may have a new 'locomotive', but the same old rail cars. Just as the Obama administration threatened to inflict an overwhelming blow on North Korea, so too is the new one."

The root of the problem, according to Baranets, is that "the Americans just cannot seem to understand North Korea's unique mentality. Yes, Pyongyang is a difficult interlocutor. But if the US wants to find common ground with them – to see that they scale back their nuclear and missile program, it should at least make an attempt to do so."

© REUTERS / Ed Jones/Pool
US Defense Chief's Remarks to North Korea Refer 'by Extension' to China
On the other hand, pointing to Donald Trump's hints on the campaign that he may talk to North Korean leader Kim Jong-un, the observer suggested that there is a chance that the Pentagon was setting things up for the President, taking a conventional approach to the problem and thus allowing Trump to "break out of this vicious circle, which has been in effect for three decades now," and begin some form of state-to-state negotiations.

Whatever the case, Baranets stressed that "the US and its allies must not forget that North Korea has Beijing's sympathy, and that China has its own game in the region."

China has been particularly apprehensive over the US deployment of its missile defense system in South Korea, and has hinted that the US system is meant to counter its own strategic deterrant, not that of North Korea.