US President Donald Trump has been critical of the North Atlantic Alliance, calling the bloc "obsolete," but still "very important" to him. Ian Shields OBE, a lecturer in International Relations at Anglia Ruskin University, told Radio Sputnik that the future of the organization will depend on several things, including US-Russian relations.

NATO's fate will be reliant on "what relationship [Trump] will form with President Putin and whether this is going to change the balance of power or the balance of threat across Europe," the analyst said.

Trump has repeatedly indicated that his team will try to improve relations with Russia which were badly damaged while Barack Obama was in office. Both leaders have already spoken, with their second phone conversation lasting approximately an hour.

"I think at present [Trump has] got far more complex issues, many of them being of his own making, to deal with," the analyst said. If the US president "starts decreasing military support to NATO, then yes it is going to require a significant reappraisal within Europe, especially if there is perceived to be a rising threat. I think part of the answer will be depending on whether Trump carries through with these discussions."

Shields suggested that the European Union could invest more into defense, but said that bloc is unlikely to create its own army. 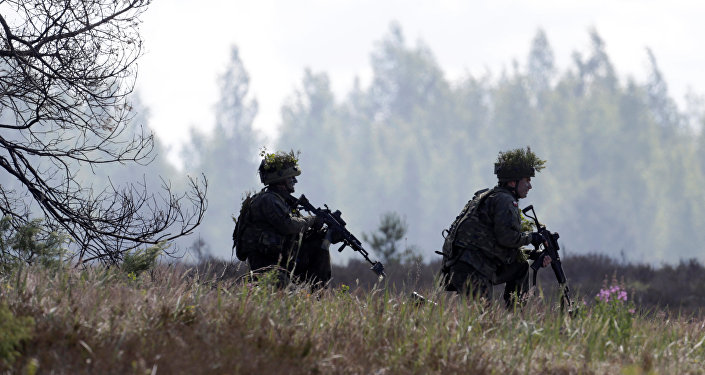 © REUTERS / Ints Kalnins
NATO Doesn't 'Protect Anyone' From Terrorism, Focuses on Russia Instead
"I just don't see it coming into being. Pretty much everybody in the EU is a member of NATO anyway. NATO has a long history. It has been designed for military defense of its member states," he said.

Shields also commented on an opinion poll conducted by conducted by IFop for Sputnik which found that more than half of respondents in six European countries, comprising France, Germany, Italy, Poland, Spain and the United Kingdom, said that Europe needs NATO and the United States to ensure their security. Only 48 percent of Americans shared these sentiments.

"I think what that represents is a degree of realpolitik. People are aware that there are threats, perhaps even growing threats to European security. They look at how successive Western governments have decreased defense spending. … Defense spending rarely gets discussed at general elections. Armies, air forces, navies have been hollowed out. Capabilities are reduced. People are rightly concerned just how secure they really are," the analyst explained.

© Sputnik /
Is the EU capable of defending itself against external threats or does the union require the aid of the US and NATO to ensure its own safety?

The survey also showed that younger people are more confident in Europe's ability to defend itself.

© AFP 2019 / CHRISTOF STACHE
'Reckless and Dangerous': EU Army is 'a Bigger Threat to People in Europe and Beyond'
"I think to a certain extent this comes down to a question of identity. … These days the vast majority of people far younger than me don't think of themselves so much in national terms, but far more in regional or international terms. They think of themselves as European as much as they think of themselves as Spanish, Italian, German or Dutch. I think there is also an issue of collective memory. [Younger people] don't remember the Cold War," he said.