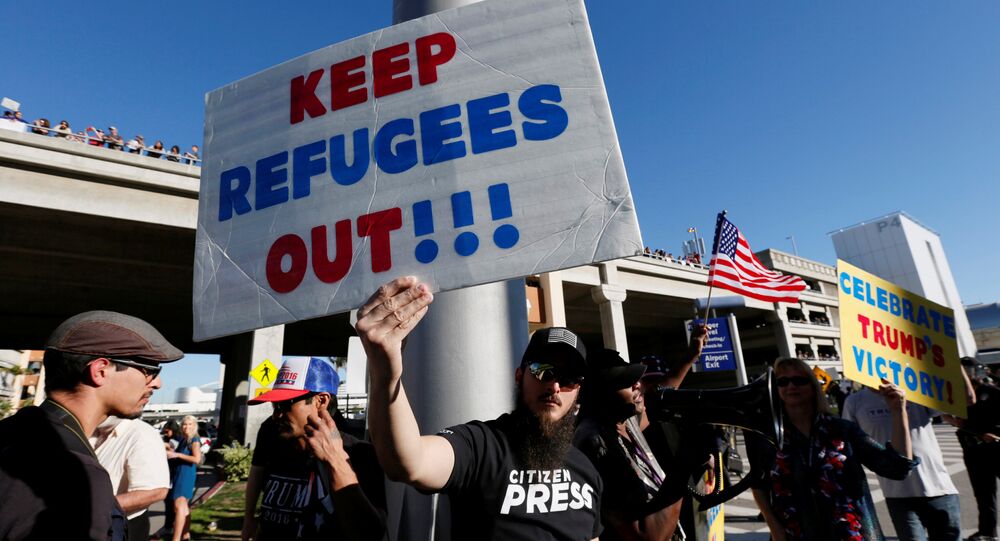 According to a former US Department of State employee, it is difficult to predict next steps of US President Donald Trump regarding foreign policy.

© AFP 2020 / Mark RALSTON
Turkish Deputy PM Calls Trump's Immigration Order Discriminatory
CAIRO (Sputnik) — It is difficult to predict next steps of US President Donald Trump regarding foreign policy as he holds no consultations on the issue with anybody and does not inform about his decisions in advance, former US Department of State employee Nabeel Khoury told Sputnik on Tuesday.

"Nobody knows what may happen and what kind of thoughts Trump has. He does not consult with anyone, does not inform anyone on his ideas. He did not consult with the State Department on the decree [banning nationals and refugees from seven countries from entering the US territory]," Khoury, who is a senior fellow at the Atlantic Council's Rafik Hariri Center for the Middle East, said.

He highlighted that the candidate for US Secretary of State Rex Tillerson may become Trump's closest adviser on such issues in case of his approval for the post.

"During this period [90 days] any change in US policy may take place. Trump has not announced in advance, which way he will chose, so there are different possible options. I am convinced that it was wrong to ban the entry of thousands of people without any reason," Khoury added.

Khoury did not rule out that Trump may reconsider the decree due to the protests that swept the country.

On Friday, Trump signed an executive order entitled "Protecting the Nation from Terrorist Attacks by Foreign Nationals." The executive order suspends entry to the country for all nationals of Iran, Iraq, Libya, Somalia, Sudan, Syria and Yemen for 90 days, bans all refugees from entry for 120 days and bars all Syrian refugees from entering the United States for a yet undetermined period of time.

© REUTERS / Hannibal Hanschke
Trump’s Protectionist Economic Decisions Threaten Global Trade – Minister
On Monday, the Wall Street Journal reported that the details of the decree were kept secret, and even representatives of the US migration authorities and State Department had few details on the issue.

Khoury spent some 25 years in US foreign service, serving as spokesperson at US Central Command in Doha and in Baghdad in 2003, as deputy director of the Media Outreach Centre in London in 2002-2004 and deputy chief of mission in Yemen in 2004-2007.

In 2008, he became director of the Near East South Asia Office of the State Department’s Bureau of Intelligence and Research, holding the post till 2012.