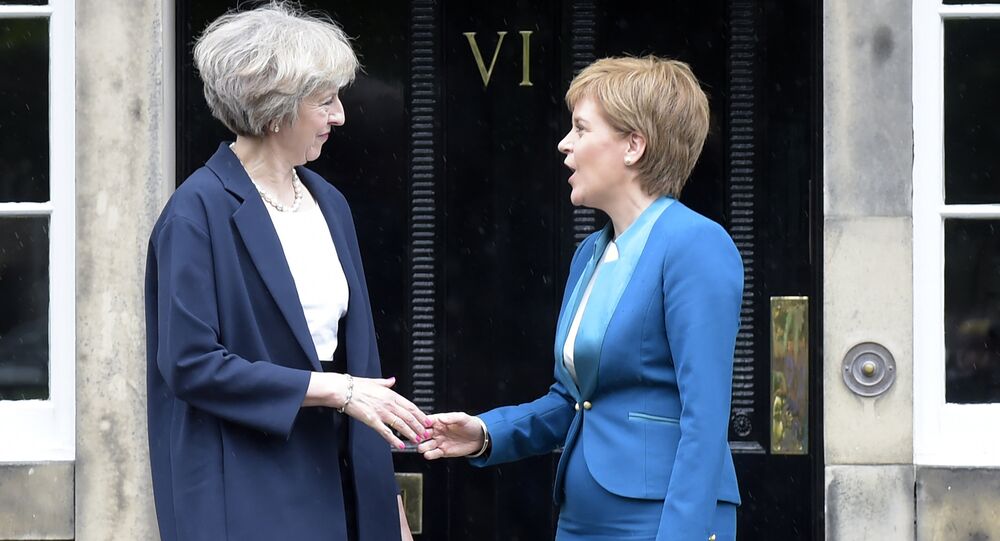 Scotland’s First Minister Nicola Sturgeon called on UK Prime Minister Theresa May on Monday to cancel the scheduled visit of US President Donald Trump to Britain, saying that the travel ban, which he imposed on Friday, was contradicting fundamental values.

MOSCOW (Sputnik) — On January 27, Donald Trump signed an executive order "Protecting The Nation From Foreign Terrorist Entry Into The United States," which suspends entry to the country for all nationals of Iran, Iraq, Libya, Somalia, Sudan, Syria and Yemen for 90 days, bars all refugees from entry for 120 days and blocks all Syrian refugees from entering the United States for a yet undetermined period of time.

"I said that while everybody understands that she [Theresa May] wants to build a constructive relationship, that relationship has to be based on values… I also said that I don’t think it would be appropriate in these circumstances for the state visit to go ahead while these bans are in place given the understandable concern that people have about them and the messages they send and the impact they have," Sturgeon told The Guardian newspaper after having a private meeting with the prime minister.

Sturgeon stressed that the order signed by Trump was "deeply wrong and likely to be counterproductive" in terms of fighting extremism and terrorism, adding that it was also contradicting international obligations regarding dealing with refugees.

© AP Photo / Petr David Josek
Europe Cannot Criticize Trump's Migration Policy as EU Builds Own Walls - Rome
Following the decree, an online petition was published at the website of the UK Parliament, demanding to prevent Trump from making a state visit to the United Kingdom. So far, over 1.3 million people signed the petition.

Earlier on Monday, the Downing Street spokesperson said May was still looking forward to host Trump later this year despite disagreement with his migration policy.