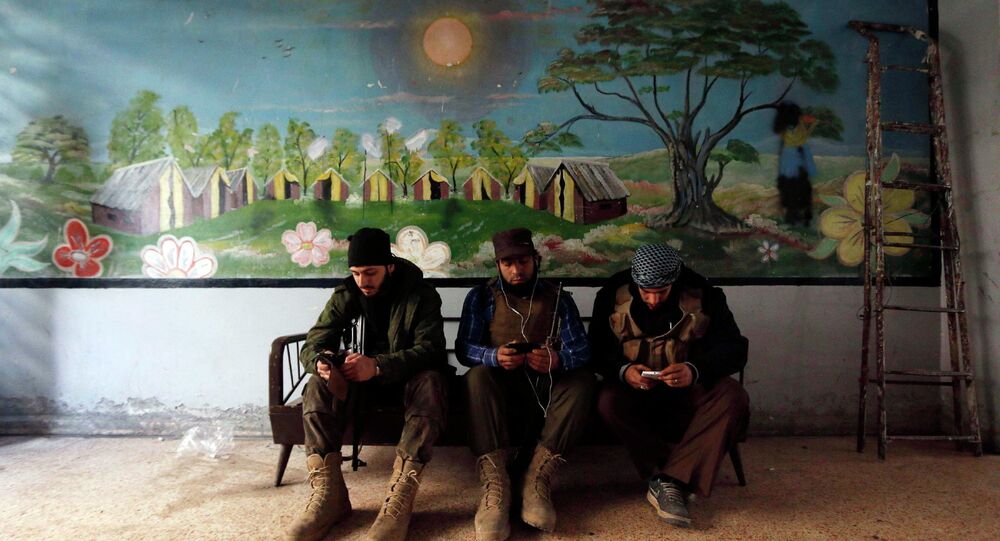 There is a certain irony in the fact that Donald Trump's executive order has barred nationals from seven Muslim-majority countries mostly affected by US' assertive foreign policies over recent decades.

Donald Trump's latest order restricting refugees from entering the US has prompted a heated debate in the mainstream media and a lot of confusion on the ground.

On Friday President Trump signed an executive order entitled "Protecting the Nation From Foreign Terrorist Entry Into the United States."

The order suspends the US refugee program for 120 days and specifically bans Syrian refugees until " sufficient changes have been made to the USRAP" (United States Refugee Admissions Program).

"I hereby proclaim that the entry of nationals of Syria as refugees is detrimental to the interests of the United States and thus suspend any such entry until such time as I have determined that sufficient changes have been made to the USRAP to ensure that admission of Syrian refugees is consistent with the national interest," the document reads.

© REUTERS / Ammar Abdullah
Why Trump's Plan to Build 'Safe Zones' in Syria Could Backfire at US
In addition, the order prohibits entry to the US for nationals from six other Muslim-majority counties — Iran, Iraq, Libya, Somalia, Sudan and Yemen — for at least 90 days, Reuters reported. Although the executive order does not mention these states, it contains a reference to a statute that applies to these Muslim countries.

Being put into effect on Friday night Trump's executive action has already sparked much controversy.

Citing sources at Cairo airport, Reuters reported Saturday that five Iraqi passengers and one Yemeni "were barred from boarding an EgyptAir flight from Cairo to New York."

The media outlet earlier wrote that two Iraqi men were detained on Friday night at New York's John F. Kennedy International Airport just hours Trump's order came into force. To add to the confusion, one of the two men is a "former US government worker and the other the husband of a former US security contractor."

Meanwhile, legally permanent US residents from the aforementioned Muslim states have also found themselves coming under scrutiny.

However, there is more to Trump's order than meets the eye.

© Sputnik / Valeriy Melnikov
Untold Story of Syrian Coup: Who is Really Behind the Plot to Topple Assad?
The seven Muslim-majority countries targeted by the executive action are the states which have suffered the most from Washington's assertive foreign policy.

Due to WikiLeaks disclosures it is no longer secret that the Obama administration played a substantial role in fanning the flames of unrest in Syria. The White House was well-aware that al-Qaeda in Iraq (AQI), the Muslim Brotherhood and Salafists have been the major driving force behind the Syrian insurgency since the beginning of the conflict in 2011.

In late 2016 ex-US president Barack Obama approved a massive Pentagon spending bill, known as the National Defense Authorization Act (NDAA) which eased restrictions on weapons transfers to Syrian opposition groups, despite the fact that some of them have been repeatedly spotted siding with al-Qaeda branches.

© AFP 2021 / Ramzi Haidar
Payback Time? The Real Cost America Pays for Saddam's Execution
The US-led NATO invasions of Iraq and Libya in 2003 and 2011, respectively, inflicted tremendous damage to the population of the countries and created a power vacuum immediately filled by radical Islamists.

Meanwhile, the story of the US-backed Saudi coalition's bombardment of Yemen still remains largely neglected. However, it is well documented that Washington has helped Saudi Arabia to fight against the Yemeni Shiite minority from the very beginning of the conflict in 2015, providing military intelligence to Riyadh and refueling Saudi fighting jets.

Furthermore, the US foreign policy establishment has also had a hand in Sudan's secession back in the 1990s and in the early 2000s. Citing a Congressional Research Service report, Rebecca Hamilton of the Atlantic chronicled in 2011 that Washington threw its weight behind the southern rebels to undermine the country's government and eventually divide the state.

© Sputnik / Vladimir Fedorenko
Martyr of Arab Spring: Gaddafi's Murder Turned Libya Into a Living Hell
As for Somalia, the White House has long waged covert operations in the country as part of its so-called war on terror.

"The Somalia campaign is a blueprint for warfare that President Obama has embraced and will pass along to his successor. It is a model the United States now employs across the Middle East and North Africa — from Syria to Libya," The New York Times reported in October 2016.

Needless to say that Iran had repeatedly become the focus of Washington's attention. In 2013 America's Central Intelligence Agency (CIA) officially recognized the fact that it was behind the 1953 coup against Iran's democratically elected Prime Minister Mohammad Mosaddeq. Following the Iranian Revolution of 1979 the US imposed tough economic sanctions against the Middle Eastern country.

And that's just half the story.

Speaking to Radio Sputnik in early January, American peace activist Dr. Phyllis Bennis said that over the last year the US has dropped 26,171 bombs in seven countries — Syria, Iraq, Afghanistan, Libya, Yemen, Somalia, Pakistan. She warned that the US is steadily expanding its bombing campaign in the Middle East and Africa.

© AFP 2021 / US AIR FORCE
It's Raining Bombs: Why US Bombing Campaigns Remain Unnoticed by Americans
"We are looking at a policy that is based on airstrikes from drones, from planes, from helicopters, dropping bombs on people hoping that that they are getting the 'right people', which means people someone has told US intelligence officials are terrorists. They are either part of ISIS [Daesh], part of al-Qaeda, they may be part of something else," Bennis pointed out.

However, according to the peace activist this strategy does not work.

"It does not work for the US in Syria, Iraq, Afghanistan, Libya, Yemen, Somalia, Pakistan. It does not work because you can't bomb terrorism out of existence," she stressed.

There is some black irony in the fact that President Trump banned the refugees from the states struck and exhausted by Washington's decades-long assertive foreign policy and regime change practice.

On Saturday thousands of academics, including 11 Nobel Laureates, signed a petition against Trump's executive action suspending the entry to the US of Syrian refugees and nationals from several other countries in the Middle East and North Africa.