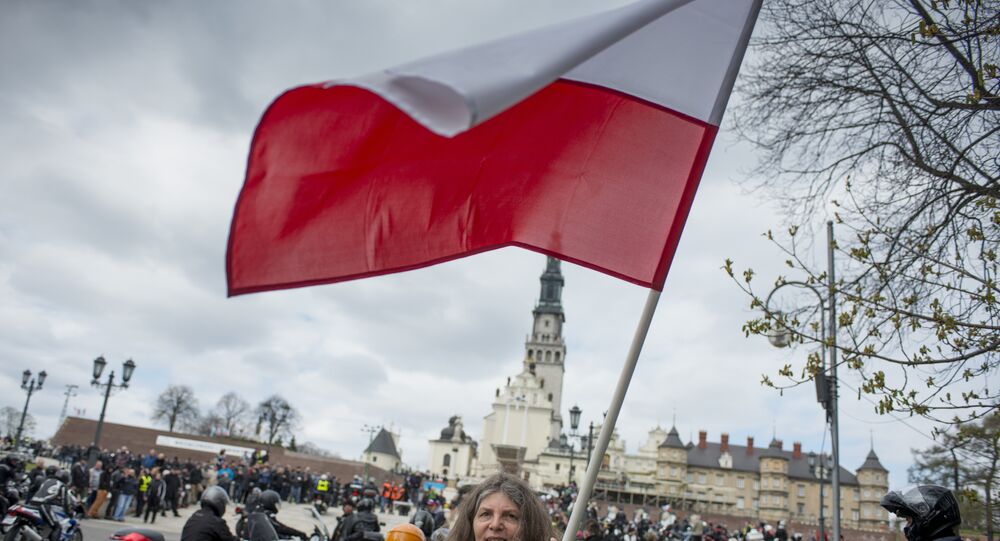 Earlier this month, media reported that Ukraine has absolutely no hope of being admitted into the North Atlantic Alliance anytime soon. Asked for comment, journalist and ex-Sejm lawmaker Mariusz Olszewski suggested that Warsaw should forget about Ukraine, and consider leaving the obsolete alliance itself.

Earlier this week, it was reported that Kiev and NATO officials were putting the finishing touches on their so-called cooperation roadmap for 2017. Last week, Ukrainian lawmakers passed a law allowing foreign troops to conduct exercises on Ukrainian territory in 2017.

However, despite the activity, experts are confident that Ukraine has absolutely no chance of joining the alliance anytime soon, given the perpetual instability rocking the country, and especially in light of President Donald Trump's commitment to trying to reduce tensions with Moscow.

Speaking to Sputnik Poland about Kiev's efforts, former lawmaker and journalist Mariusz Olszewski noted that "for those looking at politics in a sober manner, Ukraine's membership in NATO has always been unrealistic."

© AP Photo / Sergei Chuzavkov
Ukraine's Bid to Join NATO Snags on Trump's 'New Agenda'
This was the case, according to the expert, because the US and Russia have an agreement ensuring Ukraine's sovereignty and security (the 1994 Budapest Memorandum) and the European powers never considered accepting a nuclear-armed ex-republic of the USSR into the alliance in the first place. Olszewski stressed that even today, in spite of all the changes that have taken place, "some agreements remain unchanged…because agreements between the major political partners must be respected."

During his term in the Polish parliament between the late 1990s and the early 2000s, Olszewski consistently voiced his opposition to Poland's membership in the North Atlantic Alliance. Asked why he held this position, the politician told Sputnik that even then, he saw the alliance as a relic of a bygone era.

"First of all, NATO was an organization designed to protect the Western world from what came after Yalta –from the so-called Communist Bloc. The situation changed in the early 1990s: the Soviet Union collapsed. New entities were formed that wanted to reach an agreement with the West. Therefore, NATO's mission – the one that was formed in the late 1940s, ceased to be relevant."

At the same time, Olszewski noted, foreign powers have always been tempted to put military bases on Polish territory. "I recall that in the early 1990s, Poland advocated for the withdrawal of Soviet bases, a large number of which were located on its territory. These bases were dismantled. And today there is no basis for an independent and sovereign state to allow new foreign bases onto its territory or to enter into alliances that are archaic." The politician suggested that his country could do with at least "a few decades of an independent and sovereign existence."

© Sputnik / V. Kiselev
Think Tanks Stage Massive Computer Simulation of War With Russia in Warsaw
In this connection, Olszewski recalled listening a "very interesting interview" of Law and Justice party leader Jaroslaw Kaczynski on the radio recently. "Strangely, neither the opposition nor the state media seemed to pay much attention to the interview. In it, Mr. Kaczynski said that he hopes that under Trump, this 'simply unbelievable interference in Polish internal affairs by the US' will cease."

"Therefore," Olszewski stressed, "if we do not change the goals for which the NATO bloc was created – if we do not pay attention to new geopolitical realities, we will remain only a peripheral semi-colony on whom someone else's opinion is always imposed, and not just on issues of foreign policies, but, as Kaczynski said, in domestic policy as well."

Asked why, in this case, Warsaw has been so active in pushing NATO to accept Ukraine into the alliance, the commentator said that unfortunately, his country's political leadership seems to suffer "suffer from semi-colonial myopia," and that "the Polish Foreign Ministry needs some very good glasses" which could provide it with basic reasoning faculties.

© AFP 2020 / JANEK SKARZYNSKI
This picture taken on March 21, 2015 shows US troops from the 5th Battalion of the 7th Air Defense Regiment emplace a launching station of the Patriot air and missile defence system at a test range in Sochaczew, Poland

"This would help us define our own interests, as well as interests in the context of our neighbors," Olszewski noted. "Because the policy that we are pursuing now is doomed to failure, and we've always known this. Now this can even be seen with the naked eye, but it still isn't obvious to everyone."

Fortunately, Olszewski noted that important and positive changes are already taking place, some of them even observable in the Zeitgeist. "Recently I was in a bookstore, and on the front shelf saw a book called '2017: War with Russia' by [British Army] General Richard Shirreff. I was pleased that the book had a sticker on it in large letters reading 'Discount: 30%'. I think this is a kind of analogy to what is happening in politics today. Some of the plans that were made were simply exaggerated; they are outdated. This book was supposed to be a bestseller, but instead now has to be sold off on a discount. A new situation has come about."

tvn24
US Army Truck Crashes in Poland, Spilling M-1 Abrams Tank Ammunition Over Road
Furthermore, the journalist explained that "it's absolute nonsense that the election of Donald Trump in the US, or the elections set to take place in Europe, and which the liberal and military elites fear so much, will be President Putin's choice. If Putin wanted to interfere in the elections of any country, he would have to be some kind of superman." In actuality, Olszewski suggested, "what the liberal elites do not see is the completely new socio-political and economic situation in the world. Those proposals which had previously been offered to address social and economic challenges turned out to be irrelevant."

Olszewski stressed that "the establishment, both in America and in Europe, has nothing to offer; that was shown by the elections in the US, and something we will soon witness in Europe. And all of this isn't Russian propaganda, as some would like to imagine it, because it wasn't propaganda that created what is happening at the moment. Rather, it was the erroneous decisions that are imposed on sovereign nations and the people. Therefore, I think that we will now face new developments. It would be good if Poland found its own rightful place in all the negotiations that will be taking place in the coming years."

Among these negotiations, the politician hopes, will be a discussion of Poland's place in NATO. "I think that today there are many responsible politicians thinking of a new construct. What can be proposed to NATO members and to the world? After all, the current policy conducted by the alliance under US leadership has failed. This failure is something that has been discussed by Mr. Trump, among others, and Americans recognized that he's correct."

"At the moment, the establishment that lost the presidential election in the US is still convulsing in the streets of New York City, but this will soon peter out. In America too, there are reasonable people who see that their interests have been trampled upon or pushed aside, with some bloated corporations from the military-industrial complex or the oil industry taking their place, bringing no benefit to ordinary people, but only to the owners of these corporations." Hopefully, Olszewski noted, this will soon change for the better.

Ukraine Has Become a 'Weak Spot of Europe, Creating Trouble for Everyone'

About 7,500 Foreign Soldiers to Take Part in 2017 Drills in Ukraine