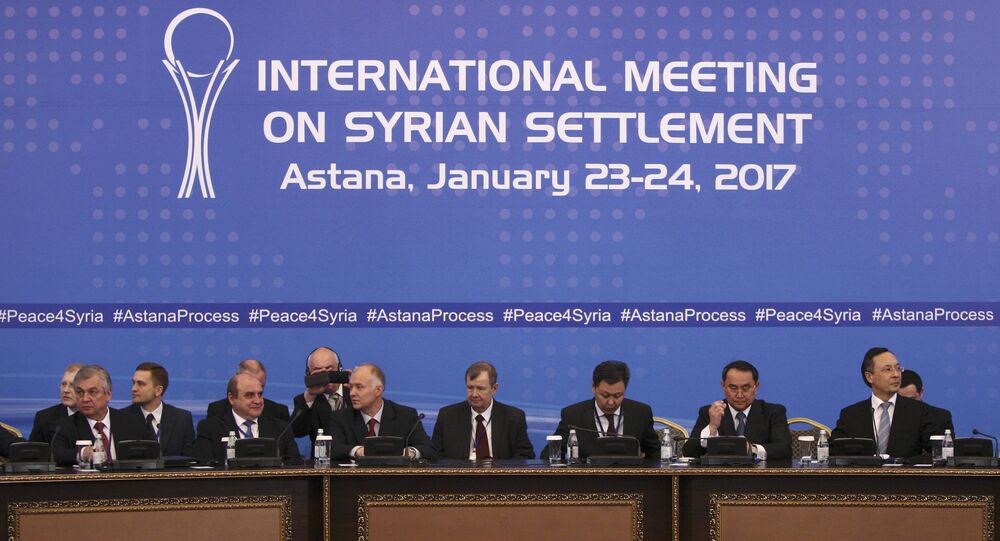 Russia is not trying to force either the basic law or crisis settlement terms outlined in the draft Constitution presented during the talks in Astana on Syrians, Russian Foreign Ministry spokeswoman Maria Zakharova said on Friday during her weekly presser.

Representatives of the Syrian armed groups at Astana talks purposefully refused to look into the proposals on constitutional change that were presented to them by the Russian delegation, insisting on the need to establish a lasting ceasefire prior to discussing political transition, adviser to the opposition delegation in Astana Yahya Aridi told Sputnik Thursday.

"We positively disagree with such assessments, which are inaccurate and are distorting the reality. Russia is not trying to force either [crisis] settlement terms or the basic law of the country on Syrians," Zakharova said.

© Sputnik / Michael Alaeddin
Text of Draft Syrian Constitution Proposed by Russia Envisages Possibility of Changing State's Borders via Referendum
She also stressed that Russia firmly believes that the future of Syria must be determined by Syrians themselves. "We are doing everything for this approach to be implemented, as only Syrians can ensure the preservation of their motherland as a united, sovereign, multinational and multiconfessional country," Zahkarova said.

Zakharova reiterated that the draft Constitution is an attempt to bring together the approaches of the Arab republic's government and opposition.

The work on the Syrian Constitution must not become an "arena for meaningless rhetoric and demonstration of ambitions," Zakharova stressed.

"The Syrian nation must see prospects of moving toward peace. Conditions for this have been provided," Zakharova concluded.

© AFP 2021 / LOUAI BESHARA
Syrian Draft Constitution Proposed by Russia Envisages Presidential Rights
The draft new Syrian constitution, prepared by Russian experts, was presented to the Syrian opposition by the Russian delegation during the Astana talks earlier this week. Head of the Russian delegation Alexander Lavrentyev underlined on Tuesday that Russia was not interfering in consideration of constitution and presented the draft to the opposition simply in order to accelerate the process.

The Astana talks on Syrian settlement were brokered by Russia, Turkey and Iran and took place in the Kazakh capital on January 23 and 24. They marked the first time since the beginning of Syrian civil war in 2011 when the government of Syria and the armed opposition sat together at the negotiations table.