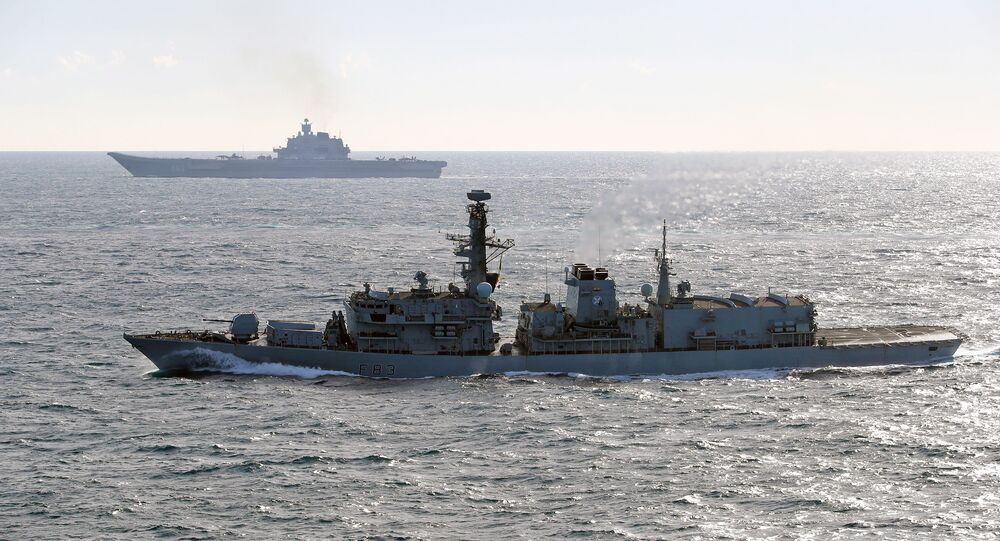 London sent its Type 23 frigate HMS St Albans and RAF Typhoon aircraft to escort the Russian aircraft carrier group as the ships sailed close to the UK territorial waters on their way back to their homeport of Severomorsk to divert attention away from the Royal Navy's troubles, journalist Alexander Khrolenko wrote for RIA Novosti.

"One cannot but get an impression that costly escorting operations and the hype in the media serve to secure more budget funds on rearmament and to divert attention away from real issues plaguing the Royal Navy," the analyst said.

The Royal Navy operates a fleet of 77 ships, including 13 Type 23 frigates, six Type 45 guided missile destroyers and four ballistic missile submarines tasked with maintaining the country's nuclear deterrent. Some of them have been involved in embarrassing incidents in recent years.

The advanced Type 45 destroyers have been in service since the early 2000s. In 2016, the UK Ministry of Defense admitted that the ships had trouble with the propulsion system which has occasionally led to near-complete power generation failures.

© East News / Everett Collection
Shhh, Don't Tell Anyone! London in Trouble for Hush-up of Trident Missile Test Gone Wrong
In November, HMS Duncan, in service since September 2013, broke down during NATO naval drills and had to be towed back to Plymouth harbor. The Type 45 destroyer was said to have suffered a total propulsion failure, which also rendered the ship unable to use it weapons.

The Type 23 frigates have been in service since the 1990s and are currently undergoing a multi-billion pound life extension upgrade. The decommissioning process will start in the early 2020s and is expected to be complete by 2035.

The Trident nuclear program has been dogged by controversy.

In 2015, "WikiLeaks published a report authored by engineering technician William McNeilly on the Trident's security system which said that the UK is on the verge of a nuclear disaster," Khrolenko said. "Perhaps, the engineer exaggerated the issue, but the fact that he blew the whistle points to how unreliable the UK's subsurface forces are."

This appears to be an accurate assessment. Last week, news leaked that a 2016 test involving a Vanguard-class submarine ended in failure when an unarmed Trident II D-5 ballistic missile malfunctioned and veered toward the US coast, the exact opposite of where it was supposed to fly.

These incidents prompted Khrolenko to conclude that anti-Russian activities are meant to "divert attention of [British taxpayers] away from major challenges the UK Ministry of Defense faces at sea. But reality has a sobering influence."