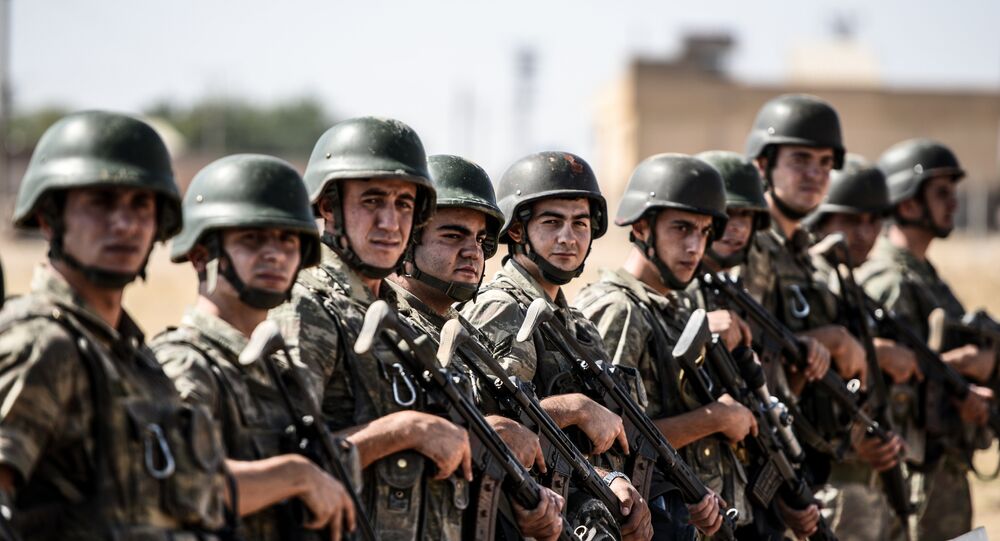 While Ankara hopes to establish closer ties with the new US administration, the Turkish leadership regards the Russo-Turkish relationship as a "strategic necessity," Turkish political commentator Metehan Demir told Sputnik.

Given its unique geopolitical position in the Middle East Turkey should take on a role of a bridge between Russia and the United States, according to Turkish political commentator Metehan Demir.

Speaking to Sputnik Turkiye, Demir shared his views on possible scenarios for the future US-Turkish relationship.

"It is still not clear for Ankara what it could expect from the new US administration," Demir pointed out, "However, it appears that Turkey wants to resume close cooperation with Washington to solve the issues of mutual concern."

© Sputnik / Maksim Blinov
Astana Talks May Become Milestone for Syrian Future - Turkish Foreign Minister
The Turkish commentator emphasized that Ankara was deeply frustrated with the Obama administration's policies in the region and exhausted by growing tensions between the US and Turkey. Now when Trump has taken office, Turkish leadership looks forward to the future with hope, he noted.

On January 19 Cavusoglu expressed confidence that Turkey's relations with the US will improve significantly under Trump in his interview with The Washington Post.

According to the Turkish Foreign Minister, Ankara and Washington have yet to solve two major problems: first, the issue of Pennsylvania-based Turkish cleric Fethullah Gulen's extradition, and, second, the US' cooperation with Kurdish People's Protection Units (YPG), regarded as "terrorists" by Ankara.

"I am confident that there is definitely a better understanding" of both issues by Trump, Cavusoglu told the media outlet.

Demir underscored that Ankara and Washington need to bring their positions on Syria closer together.

"First, we insist that the US should halt support to the 'triangle' of the Democratic Union Party [PYD], the People's Protection Units [YPG] and the Kurdistan Workers' Party [PKK]," the Turkish political commentator underscored.

"In fact, Ankara is seeking to restore a climate of mutual trust [between Turkey and the US] which has been lost in recent years. It is not clear, however, whether it is possible under the circumstances. Only time will tell," the commentator told Sputnik.

On January 11 Rex Tillerson, nominated by Trump as Secretary of State, highlighted the importance of US-Turkish relations during a confirmation hearing before the Senate Foreign Relations Committee.

"We have to re-engage with President Erdogan in Turkey, this is a long-standing NATO ally. Due to the absence of US leadership, he got pretty nervous about the situation. He has turned to his next available ally, he has turned to Russia. To make it clear to him, this is not a sustainable ally. Your sustainable alliance is with the United States," Tillerson said.

However, at the same time he dubbed Syrian Kurdish fighters as America's "greatest allies" and stressed that the US should "recommit to the Syrian Kurds" that Washington intends to continue to support their advance on Daesh's stronghold Raqqa.

"Defeating ISIS [Daesh] must be our foremost priority in the Middle East," Tillerson underscored.

According to Demir, it is obvious that the Trump administration will pursue America's interests in the region in the first place. For its part, Ankara needs to realize this and conduct its foreign policy while being devoid of emotions.

On the other hand, the development of Russo-Turkish relations remains a strategic necessity for Ankara, the political commentator believes.

© Sputnik / Michael Alaeddin
Space for Dialogue in Syria Expands as New Armed Groups Join Truce - Russian Senator
In light of this, the Turkish leadership should maintain a balance between building working relationship with Moscow and cooperating with Washington, he stressed.

"Given its geopolitical position in the region, Turkey should play the role of a mediator, a bridge between the US and Russia," Demir concluded.

Following the July attempted coup in Turkey the US-Turkish relationship has deteriorated over Washington's hesitance to extradite cleric Gulen, the alleged mastermind behind the unrest. To add to Ankara's displeasure, Washington continues to maintain close ties with Kurdish militias on the ground in Syria.

On Monday, Turkey's Deputy Prime Minister Numan Kurtulmus underscored that Washington's change of heart toward Gulen and the PYD is essential for states' bilateral relations.

"One of these is the extradition of [Fetullah] Gulen who is the leader of a bandit gang that committed a crime against the entire [Turkish] population during the July 15 coup [attempt]. The second fundamental issue is the end of the support to the PYD," Kurtulmus reiterated as cited by the Anadolu news agency.