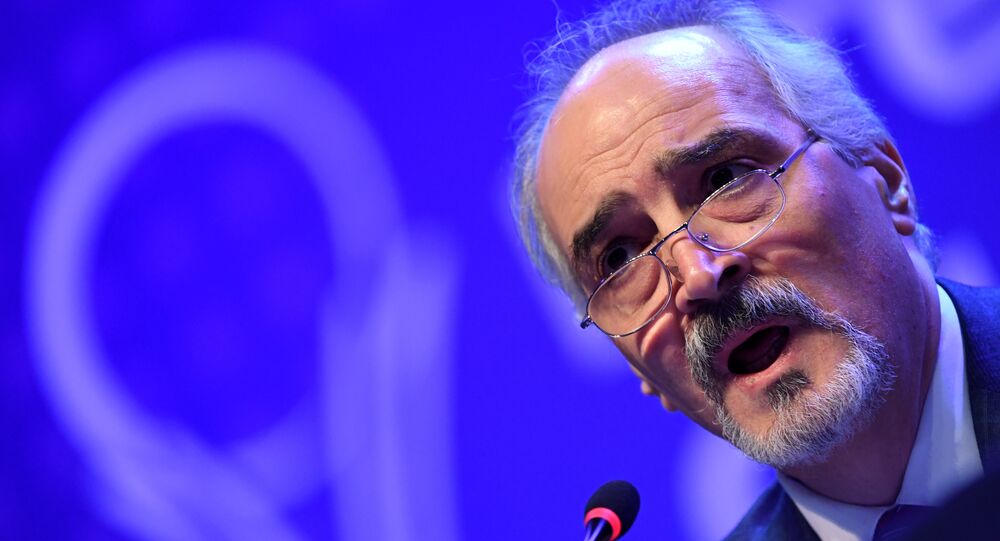 MOSCOW (Sputnik) – He also said this was not the first time Damascus sat at the negotiations table with the opposition as it had already done it during Syria peace talks in Moscow.

"This has been extremely painful for us to sit in the same room with other Syrians linked to foreign agendas and working for foreign powers. Some of them have committed even terrorist acts. However, this is not the first time we sit with other Syrians. We did it in Moscow 1, Moscow 2 consultations, we did it in Geneva," Jaafari told a press conference following the intra-Syria talks in Astana.

© REUTERS / Mukhtar Kholdorbekov
Syrian Armed Opposition Vows to Reject Iran's Role in Syrian Reconciliation, Welcomes Russia's Role as Guarantor
According to the official, the Syrian government is ready to do whatever it takes to rescue the country, but only according to specific framework and agenda.

"Whatever it takes us, wherever it is we will go to stop this bloodshed," he said.

The aim of Astana talks on Syria was to consolidate the ceasefire, upcoming Geneva talks is a different process, he said.

"Astana is Astana, and Geneva is Geneva. Astana [meeting] was held for a very specific reason, for a specific purpose… consolidating the regime of cessation of hostilities… Geneva is something else, definitely we are part of the Geneva process, but it's a different process."

© REUTERS / Mukhtar Kholdorbekov
Syrian Armed Opposition Vows to Reject Iran's Role in Syrian Reconciliation, Welcomes Russia's Role as Guarantor
The Syrian opposition delegation is "pitiful" in its rejection of Iran, which is one of the three guarantors playing a positive role in reaching final agreement in the Syrian settlement Astana peace talks, he said.

Earlier in the day, Syrian armed opposition delegation head Mohammed Alloush said the delegates would not agree to Iran playing any role in settling the six-year conflict in the country.

"Iran played a positive role in facilitating reaching this final formula that is expressed as I said in the final declaration. It is really a pitiful situation when… some members of the delegation of the armed terrorist groups who attended the Astana meeting and accepted the terms of the December 29 agreements, it is pitiful that they are criticism one of the three guarantors who facilitated this," Jaafari told a press conference following the Astana talks.

A trilateral mechanism to monitor ceasefire in Syria includes a way to resolve the issue, Bashar Jaafari said, expressing confidence that an agreement to create such a mechanism will be fulfilled.

"I am confident that this agreement will be fulfilled," Jaafari said.

Those willing to cease hostilities in Syria attended the peace talks in Astana, he concluded.