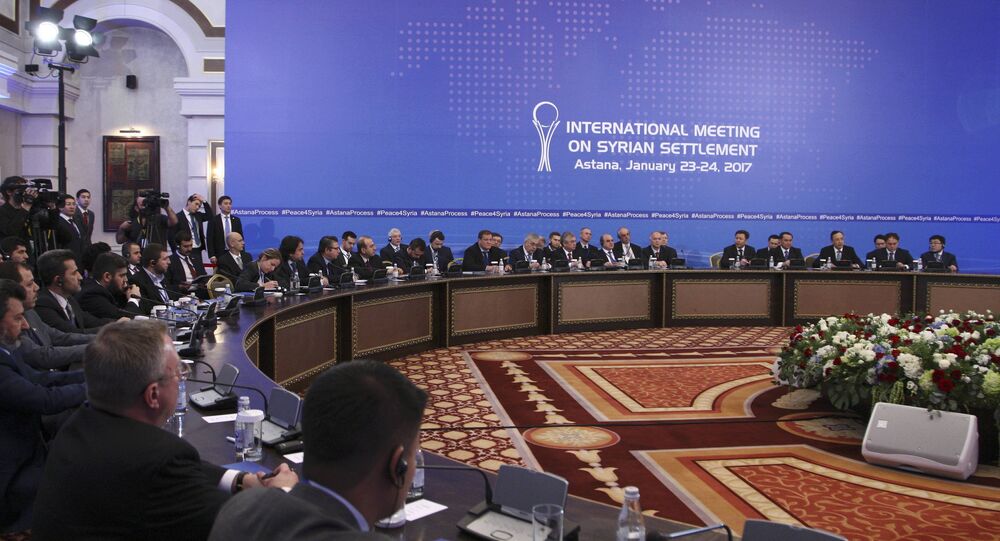 The intra-Syrian talks in Astana may drag through Tuesday evening, though previously the sides expected the meeting to end by 2 p.m. local time (08:00 GMT), different sources in the participating delegations told Sputnik on Tuesday.

ASTANA (Sputnik) — According to the information provided, the work on the final document is still ongoing. Russia, Turkey and Iran are expected to sign the communique, while Syrian government and armed opposition will present their own statements separately.

On the sidelines of the meeting, participating delegations said the talks could drag through Tuesday evening or even Wednesday, depending on the organizers' decision.

© AP Photo / Sergei Grits
First Ever Talks Between Damascus, Armed Opposition Can Pave a Way for Syrian Crisis' Final Resolution
Earlier in the day, UN Special Envoy for Syria Staffan de Mistura told Sputnik that he hoped that the final document would be signed later today.

The Syrian settlement talks in Kazakhstan's capital brokered by Moscow, Ankara and Tehran, started on Monday. The talks brought together the delegation of the Syrian government and representatives of armed opposition groups for the first time since the beginning of the state's civil war in 2011.