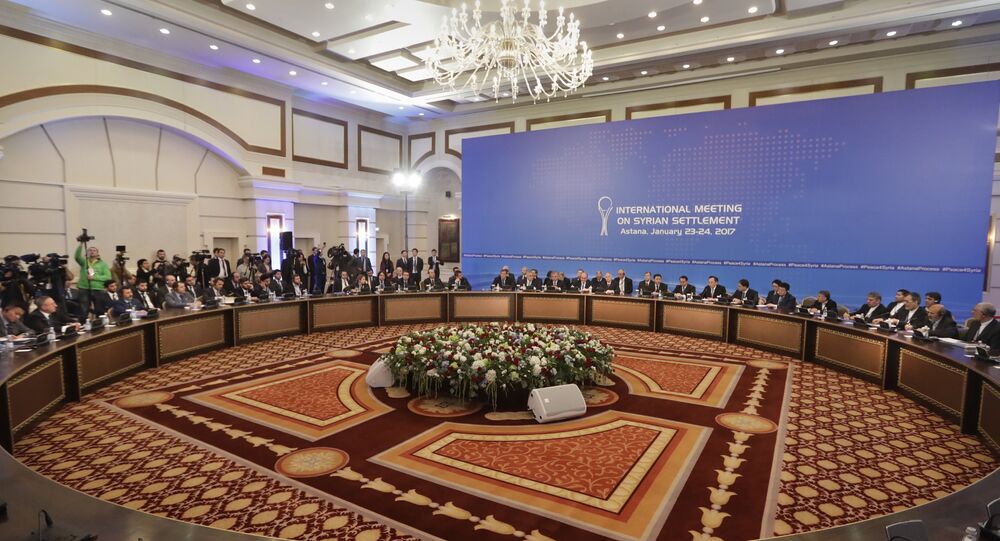 According to the Russian presidential envoy on Syria, a mutual distrust persists between the parties to the Syrian conflict.

© REUTERS / Mukhtar Kholdorbekov
Another Plenary Session on Syria in Astana Unlikely on Monday, Talks Possible
ASTANA (Sputnik) — A mutual distrust persists between the parties to the Syrian conflict, but the important thing is that the negotiations are ongoing, the head of the Russian delegation, Russian presidential envoy on Syria Alexander Lavrentyev told Sputnik on Monday.

"Russia is in general satisfied with the results of the plenary session of the talks on Syria in Astana," Lavrentyev said, adding that however, "mutual distrust remains between the sides."

According to Lavrentyev, participants of the meeting will continue working on Monday and Tuesday to agree the final document.

"We will work on it today and tomorrow," Lavrentyev said.

He also said that the parties could come up with a joint statement on Tuesday at 14.00 local time (08:00 GMT).

The fact that the parties to the Syrian conflict are at the same negotiating table in Astana allows to hope for rapprochement of their positions, Lavrentyev said.

"This is a significant symbolic step, which allows to count on some possible progress, rapprochement of positions of direct parties to the conflict," Lavrentyev told Sputnik.

However, it is too early to speak of the content of the joint statement of the Astana talks on Syria, Alexander Lavrentyev added.

"It is difficult to say yet. About the Syrian settlement in general," Lavrentyev said about the final document.

No Direct Syria Government-Opposition Talks Yet in Astana - Armed Opposition