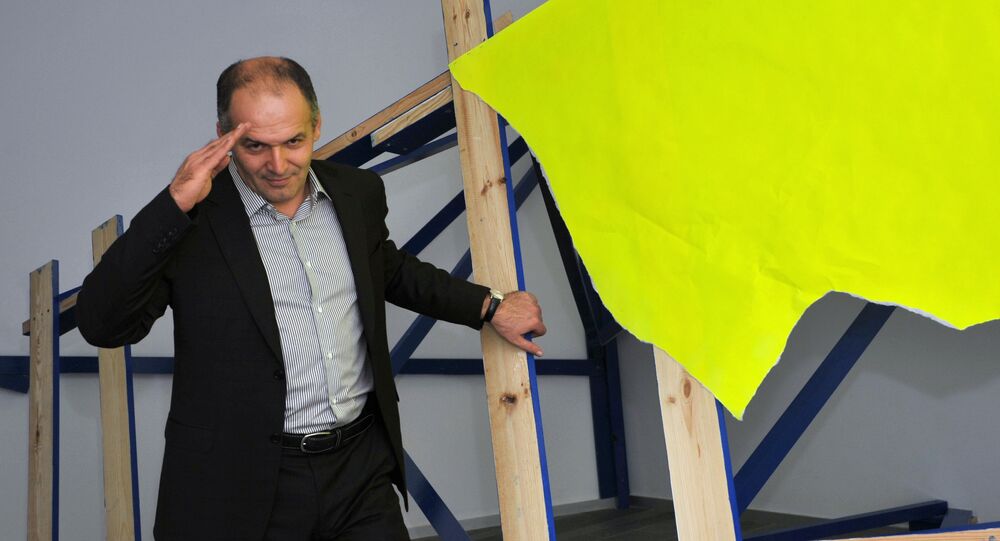 In December, Ukrainian billionaire Victor Pinchuk wrote an explosive op-ed in The Wall Street Journal, laying out how Ukraine can end its conflict with Russia. Pinchuk's plan is simple: Kiev must close the book on Crimea, proceed with elections in Donbass, and forget NATO. Unfortunately, elites in Kiev see his ideas as nothing less than treasonous.

Pinchuk's appeal, published in the opinion pages of the WSJ on December 29, laid out his vision for how the new administration in Washington can try to sort out the mess in Kiev in the interests of improving relations with Moscow.

Kiev, the billionaire steel magnate wrote, must be willing to compromise, including making a genuine effort to end the civil war that's being waged in the country's east. Ukrainian authorities must accept local elections in the breakaway territories, and live up to their commitments under the Minsk agreements, and Russia should do the same, the oligarch added. Crimea, he said, "must not get in the way of a deal that ends the war in the east on an equitable basis."

© AP Photo / Mikhail Palinchak/Presidential Press Service
Ukrainian Parliament Adopts Law Allowing US Troops to Join Drills on Ukrainian Territory
Kiev sent the Ukrainian army to deal with unrest in eastern Ukraine in April 2014, after protesters refused to recognize the legitimacy of authorities who came to power in the February 2014 coup d'état. In March 2014, Crimean authorities organized a referendum, asking the peninsula's residents if they wanted Crimea to rejoin Russia. A whopping 96% voted 'yes', and Moscow soon accepted the peninsula's request.

Pinchuk also made proposals on other, related fronts, suggesting that Ukraine "should consider temporarily eliminating EU membership from our stated goals for the near future." As for NATO membership, he stressed that Kiev should "accept that Ukraine will not join NATO in the near- or midterm." For now, he said, the country should choose neutrality. He even hinted that Kiev would be "ready to accept an incremental rollback of sanctions on Russia" if that helps to restore peace, unity and security to the country.

Pinchuk's ideas didn't include anything radically outside the reigning political orthodoxy in Ukraine. He didn't propose recognizing Crimea as part of Russia, and maintained that Moscow was to blame for "initiating" the conflict in the east.

Nevertheless, as expected, the billionaire's op-ed caused an uproar both in the Ukrainian media and in political circles. Ukrainian President Petro Poroshenko thundered that Kiev would never compromise on Russian 'aggression', and stressed that he would never abandon plans to join NATO and integrate into the EU. Pundits called the op-ed "An offer to surrender," condemned Pinchuk's "tone of appeasement" and defiantly proclaimed that Ukrainians would never accept his peace proposals.

© AFP 2021 / EMMANUEL DUNAND
Ukraine's Poroshenko 'Absolutely Sure' of Effective Future Cooperation With US
Eventually, Pinchuk was even forced to apologize for publishing the article, blaming heavy editing and the WSJ's provocative headline, which read "Ukraine Must Make Painful Compromises for Peace With Russia."

So what was actually behind this political storm in a teacup? According to Radio Sputnik contributor Daria Cherednik, Kiev was mistaken to see Pinchuk's op-ed a "treacherous blow to the back," since the jab was actually "direct, open, and frontal – right in the stomach."

With the publication of the editorial, Cherednik wrote, "all Poroshenko's horses and all of his men were suddenly alarmed overnight, since the throne under the king had clearly started to wobble." In fact, she added, not only was the throne wobbling, "but a contender has appeared for the king's seat. At least that's how it appeared to the Ukrainian president himself, and to his entourage saw things," accusing Pinchuk of "filing down the throne's legs."

© AP Photo / Efrem Lukatsky
Biden's Visit to Ukraine Sends Shivers Down Kiev's Spine
Pinchuk, the journalist recalled, has long been a notable figure in Ukraine's circles of power. He's married to the daughter of former President Leonid Kuchma, and is valued at $1.5 billion, making him the third richest person in Ukraine. "But most importantly," Cherednik added, "he hasn't been tainted in any political scandal."

Pinchuk "even managed to help finance Hillary Clinton's election campaign without creating problems with Donald Trump," the journalist wrote. The oligarch had indeed used the Victor Pinchuk Foundation to make millions of dollars in contributions to the Clinton Foundation, but also paid $150,000 to the Trump Foundation in exchange for a speech by then-candidate Trump in September 2015.

The billionaire's op-ed in the WSJ was perceived as a stab in the back for obvious reasons, Cherednik stressed. "How else could the current Ukrainian establishment perceive Pinchuk after such 'seditious speeches'? It would be one thing if he presented his ideas on some local television channel, something that could be cast off as insane and forgotten. But he published his thoughts in an American newspaper. What if the White House reads the article (it surely has) and thinks that Victor Pinchuk is a reasonable figure who's able to negotiate, and therefore a very suitable candidate for the presidency?"

Kiev certainly didn't appreciate Pinchuk's "creative" approach, Cherednik suggested. "Poroshenko and his staff even refused to participate in the traditional breakfast organized by the businessman in Davos on Thursday. And that's a shame. David Cameron and Henry Kissinger decided that this would be quite a worthy event and did not reject the invitation." Ultimately, the journalist noted, President Poroshenko was left "standing outside the door at Davos salivating, not just because of the lost opportunities for a delicious meal, but also for the lost company."

Ukraine's Poroshenko 'Absolutely Sure' of Effective Future Cooperation With US