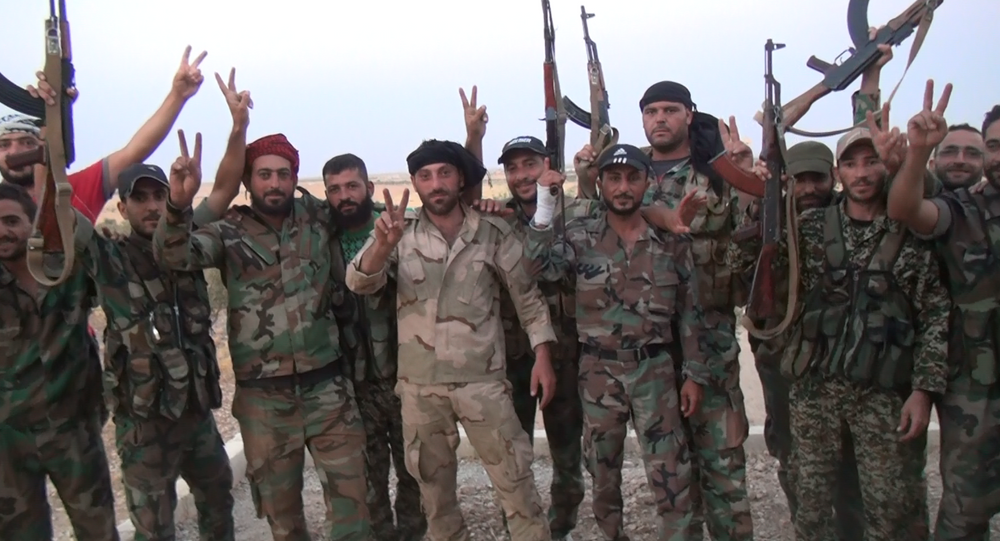 Opposition field commanders will take part in the Syrian peace talks in Astana; the conference is due to begin on January 23. According to Russian academic Sergei Demidenko, the fight against Daesh could unite the Syrian government and the armed opposition.

Although the upcoming Syria peace talks in Kazakhstan's capital Astana will be no walk in the part, this conference is a step in the right direction in many respects, experts say.

"Meeting in Astana is quite an important stage of the process of settling the Syrian crisis," Boris Dolgov, a Senior Research Fellow at the Institute for Eastern Studies of the Russian Academy of Sciences, told RIA Novosti.

© Sputnik / Evgeny Biyatov
Russia Sees Positive Progress in Syria Crisis Settlement - Foreign Minister
The expert pointed out that the Astana talks are due to bring together the Syrian government and the opposition, which is represented by armed groups with influence on the ground.

In this respect, Dolgov echoes Russian Foreign Minister Sergei Lavrov's remarks, which he delivered at a Moscow press conference on January 17.

"I believe that one obstacle to the talks was the fact that the UN only sent invitations to members of the political opposition, the overwhelming majority of whom were emigrants living in Europe, the Middle East or other countries but not in Syria, and to some opposition members in Syria… These talks were not attended by those who really determine the situation on the ground, that is, armed groups or armed opposition," Lavrov emphasized.

© Sputnik / Vladimir Vyatkin
Why 'Moscow Troika' Meeting Brought 'the American Century to a Crashing End'
He specified that the goals of the Astana meeting include "the consolidation of the ceasefire regime" and the engagement of the armed opposition in the Syrian political process.

"This process was launched by the UN in Geneva but has lost momentum. There are plans to re-launch it. We believe that field commanders must participate in this process as full members," he noted.

Nevertheless, the Russian Foreign Minister has repeatedly referred to the fact that the Astana format is not aimed at replacing the Geneva negotiations.

Speaking at the Shanghai Cooperation Organization (SCO) summit Friday, Lavrov stressed that Monday's intra-Syrian talks in Astana are "an important contribution to… a comprehensive political settlement in Syria which will continue in wider activities in Geneva in early February."

For his part, Sergei Demidenko, lecturer at the Institute of Social Sciences of the Russian Presidential Academy of National Economy and Public Administration (RANERA), assumed that it would be hard for the Assad government and the armed groups to find common ground during the upcoming January talks.

However, according to the expert, the necessity to eradicate the threat posed by Daesh (ISIS/ISIL) could apparently unite the Syrian government and the militants.

"I think that it is unlikely that they [the Syrian government and the opposition] will negotiate dividing Syria into spheres of influence; I believe that the only issue they could hypothetically reach a compromise on is a joint operation against Daesh… This is [their] only point of convergence," Demidenko suggested in an interview with RIA Novosti.

© Sputnik / Mikhail Voskresenskiy
Pack Up, Go Home: Astana Talks on Syrian Peace 'No Place for Those Dreaming of Toppling Assad'
The expert has drawn attention to the fact that many armed groups still do not accept that President Bashar al-Assad has held onto power in Syria; for his part, following a series of military successes the Syrian government is unlikely to make any substantial concessions to militants, Demidenko assumed.

On the other hand, it also deserves attention that the Assad government has to hold talks with a vast number of opposition organizations including the Free Syrian Army (FSA) and the National Coalition for Syrian Revolution and Opposition Forces.

"There are a vast number of these organizations," Demidenko stressed, "some are more 'moderate,' the others are less 'moderate,' and each [of the organizations] has its own demands; some say 'we will build an Islamic state,' some pledge to establish democracy, and some have yet to formulate their agenda. Therefore, I do not see any opportunity [for them] to reach common ground except for their possible joint fight against Daesh."

Likewise it is still hard to predict whether the Geneva talks will bring any tangible results, Demidenko underscored.

He believes that the Geneva meeting on Syria should be preceded by a series of summits in the Astana format.

"I believe that more meetings [in the Astana format] need to be held with the involvement of international mediators," he stressed.

The Syrian government and opposition groups are due to meet in Astana on January 23 for negotiations brokered by Russia, Turkey and Iran. The talks are aimed at establishing a platform for further peace negotiations. The Astana meeting comes on the heels of the Syrian nation-wide ceasefire endorsed by the UN Security Council on December 31, 2016.