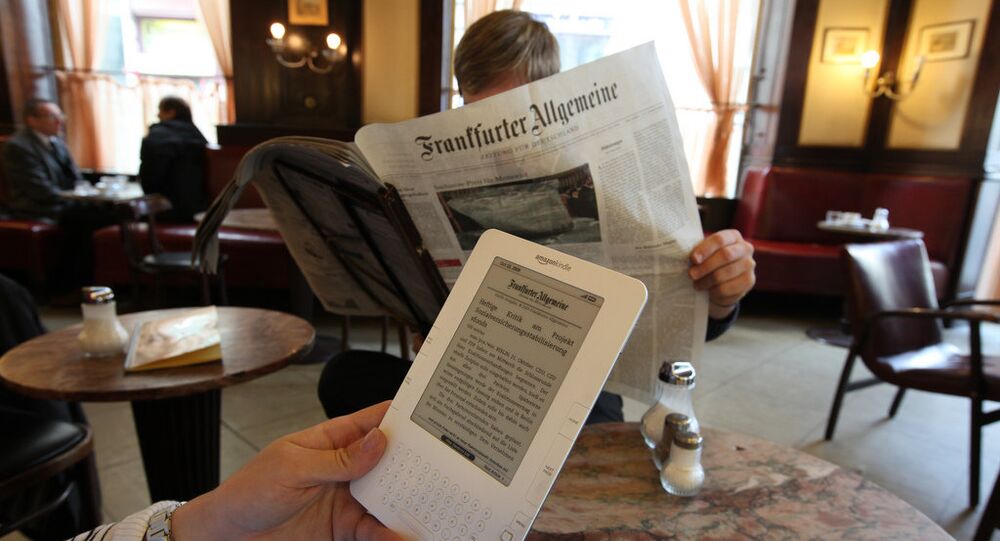 2016 has come and gone, but Russia has remained the number one bogeyman in the eyes of some of the most influential mainstream media resources in the world. Statistics compiled for the Rossiya Segodnya news agency show which countries' print, radio and television media are most obsessed with casting Russia in a negative light.

The statistics, compiled using the 'Russia in the World' information analysis system, monitored leading mass media outlets (print, television, radio) across 50 countries and in 25 languages between January and December 2016, paying particular attention to media coverage in Europe, North and South America, as well as Asia and the Middle East.

The results were somewhat surprising. When it comes to the publication of stories with an unapologetically negative tone toward Russia, the powerful media establishment in the United States didn't even make the top ten, notwithstanding the #Russiadidit paranoia of many US politicians and media figures in the last few months over spurious allegations of Russia 'hacking the US election'.

Instead, that dubious honor went to Germany, whose journalists churned out a whopping 878 stories with a brazen negative bias toward Russia. Germany was followed by Ukraine (no surprise there), Sweden, and Poland, with the Czech Republic making the top five. The UK, Denmark, France, Saudi Arabia and Spain rounded out the top ten.

© Sputnik / Evgeny Biyatov
YouTube Says Request on Sanctioned RT Employees Not Political
Interestingly, among the top five 'Russia critics', the number of negative stories actually fell in Germany, Ukraine, Poland and the UK between 2015 and 2016, with only Sweden and the Czech Republic seeing a small or moderate rise in the number of stories that were negative in their tone.

The picture changes somewhat when accounting for stories about Russia with only a 'somewhat negative' slant. According to the compiled data, Germany leads the way (with over 6,000 such articles), with France, the UK, the US, Poland and Sweden following, respectively. Apart from Germany and Sweden, all of these countries have seen a decline in the number of 'negative' and 'somewhat negative' stories between 2015 and 2016.

Analyzing the data, Russia in the World's analysis discovered that while no national media were dominated by an entirely 'negative' slant toward Russia, a significant number of countries, including about a dozen EU members, the UK, Norway, Georgia, Ukraine, Jordan, Saudi Arabia, South Korea, Japan, the US, Canada and Colombia showed a tendency toward 'somewhat negative' coverage of stories having to do with Russia.

© AFP 2020 / TIMOTHY A. CLARY
'Neo-Liberals' and 'Fake News': The West's Campaign Against Free Speech
Surveyed countries with a 'neutral' stance, on the other hand, included France, Spain, Belgium, Finland, Iceland, Greece and Serbia in Europe, as well as Mexico, Cuba, Venezuela, Peru, Brazil, Chile, and Argentina in Latin America.

Compared with 2015, Germany's Sueddeutsche Zeitung and the UK's The Times had the 'honor' of increasing negative coverage, (moving up from eighth to third and tenth to fifth, respectively) in 2016. France's Le Figaro, which was ninth in 2015, dropped out of the top 10 entirely in 2016.

Altogether, statistics show that global media coverage of Russia-related news has declined by 2.7% between 2015 and 2016, from 64,106 to 62,367 stories during the two years. In 2014, the number of such stories was even higher, coming in at over 73,450 stories: 15.1% more than in 2016. As 'Russia fatigue' sets in, particularly as people in many Western countries become less prone to accepting the mainstream media narrative regarding the country, hopefully some journalists will take the hint and change their tone over the coming year.

US Intel Report: 'RT & Sputnik Are Being Accused of Doing Journalism'