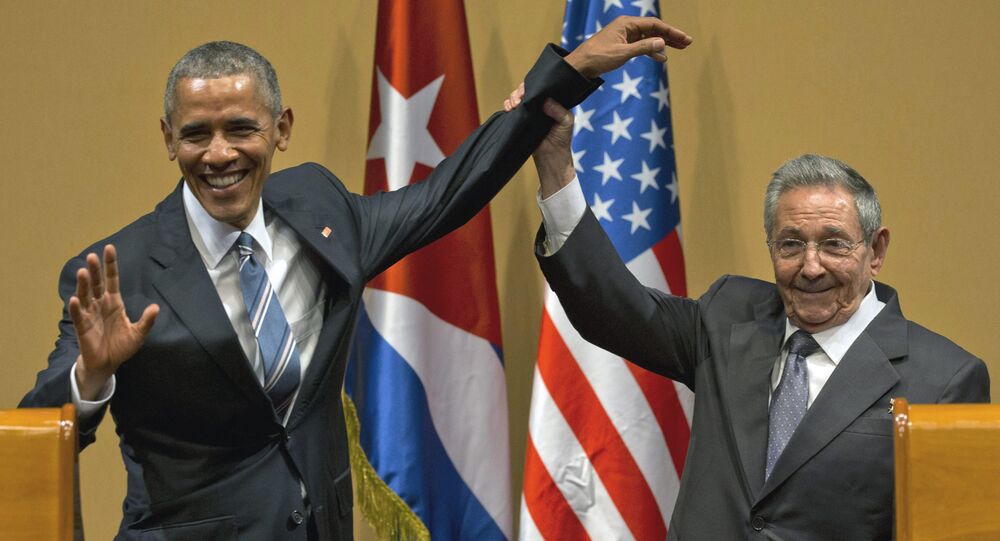 Cuba Embargo: Why US Foreign Policy 'Doesn't Have to Be Consistent'

Washington has reasons to distrust Havana and keep the anti-Cuban embargo in place, Sebastian Arcos of the Cuban Research Institute told Radio Sputnik. According to the policy specialist, Cuba continues to have a significant influence on left-wing forces in Latin America despite the collapse of the Soviet Union.

Although the Cold War ended almost 25 years ago and the United States has been trading with communist China since the 1970's, Washington's anti-Cuban embargo remains in place.

In 1962 President John Kennedy imposed the embargo on Cuba to tackle "the threat posed by its alignment with the communist powers."

However, following the collapse of the USSR, the US intelligence community admitted that Cuba no longer posed a threat to Washington.

"At present Cuba does not pose a significant military threat to the US or to other countries in the region. Cuba has little motivation to engage in military activity beyond defense of its territory and political system," the intelligence report, issued in November 1997, concluded.

© AFP 2021 / YAMIL LAGE
Cuba Calls End of Wet-Foot, Dry-Foot Policy ‘Important Step’ for Ties With US
In 2015 US President Barack Obama made a step toward the improvement of US-Cuban relations.

After six months of negotiations, the two nations resumed diplomatic relations; on July 20, 2015 the US reopened its embassy in Havana. However, although the anti-Cuban sanctions were partially waived by Obama, the embargo has yet to be lifted.

"It is true that the Soviet Union doesn't exist, the Cold War is over, and Cuba is an impoverished country that does not present a significant military threat to the US. It is also true that Cuba still remains… a bitter enemy of the United States in every possible scenario in the world," he claimed.

According to Arcos, the crux of the matter is that Cuba continues to have "a significant influence on left-wing" forces in Latin America despite the collapse of the Soviet Union.

The scholar specified that the embargo was modified in 1992 and then underwent further changes in 1996.

"The embargo was modified in 1992 and then it was modified again more significantly in 1996 by the so-called Helms-Burton Act that codified the embargo into law. It is no longer in the hands of the [US] president and that is why President Obama could not change it," he pointed out.

The conditions for lifting the embargo include "the return to a democratic path, elections and respect for human rights," Arcos noted.

"These conditions are yet to be met by the Cuban regime," he insisted.

However, it is no secret that the US is allied with a number of non-democratic regimes which routinely violate human rights.

Wouldn't it be logical for the US to impose sanctions on all of them as well?

"Superpowers do not have a coherent foreign policy," the scholar replied, "And nowhere in international relations' history is it said that any given foreign policy has to be consistent."

© AFP 2021 / YAMIL LAGE
US, Cuba Sign Maritime Boundary Bilateral Treaty
According to Arcos, the issue of the ethics in foreign policy is usually eclipsed by "much more important geopolitical reasons."

Using Vietnam as an example, the scholar explained that although the latter remains a Communist state, Washington is trying to maintain close relations with Hanoi, viewing it as a potential bulwark against China, the country's major geopolitical competitor.

"These overriding geopolitical reasons don't exist in the case of Cuba," he explained.

Meanwhile, analysts underscore that Obama's historic normalization with Cuba is under threat, given Donald Trump's tough stance toward Havana.

"Whatever course Trump settles on will not only determine the fate of what was intended to be one of Obama's foreign-policy legacies but will also shape relations with Latin America and the Caribbean and affect the security of US citizens," Christopher Sabatini, an adjunct professor at Columbia University's School of International and Public Affairs (SIPA), noted in his op-ed for Foreign Policy journal, highlighting the importance of Obama's policy of US-Cuban normalization.

The Trump administration's Cuban foreign policy has yet to take shape. However, it appears that the prospect of lifting the embargo will continue to hang in the balance.