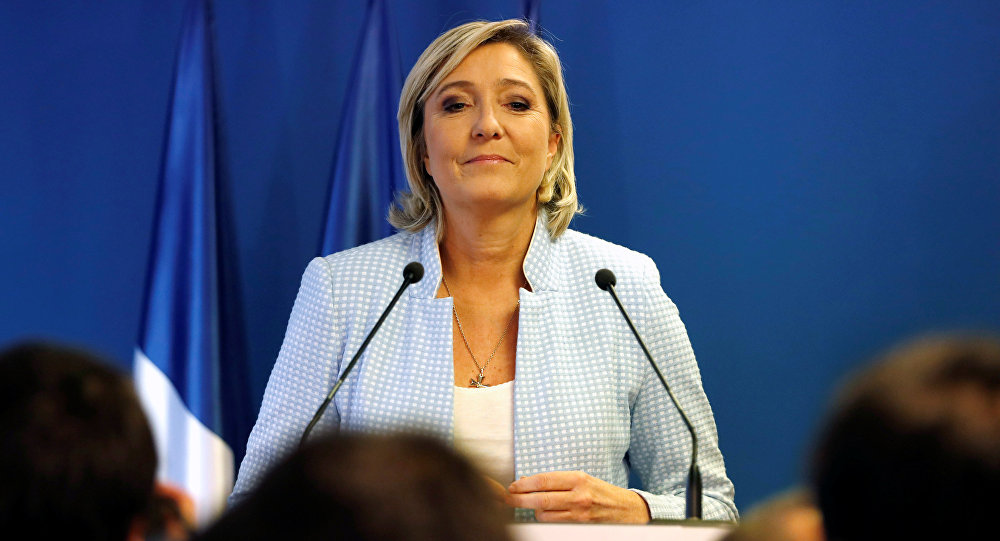 French far-right National Front party leader Marine Le Pen, center-right The Republicans’ nominee Francois Fillon and independent candidate from the left Emmanuel Macron are more likely to win the first round of the presidential elections than other candidates, with Le Pen polling at around 25-26 percent, a poll by Cevipof showed Thursday.

MOSCOW (Sputnik) — According to the survey conducted for Le Monde newspaper, if the 1st round of the elections took place the following Sunday and former Prime Minister Manuel Valls were the Socialist Party's (PS) candidate, 25 percent of the votes would go to Le Pen, 24 percent to Fillon, 19 percent to Macron and only 10 percent to Valls.

© Sputnik / Mikhail Klimentiev
'Russian Card' in French Presidential Run is Not About Russia, Actually
The poll showed that with Arnaud Montebourg or Benoit Hamon as the PS nominee, Le Pen would get 26 percent of the votes, Fillon would have 25 percent, Macron 21 percent and Montebourg himself would receive 7 percent.

The survey was carried out on January 10-15 among 15,921 people of 18 years old and older, with 10,986 of the respondents expressing certainty to vote in the presidential elections.

The Socialist Party primaries will be held on January 22 and 27. The first round of the presidential elections will take place on April 23.

Poll: Over Half of French Citizens Prefer Macron to Fillon as President