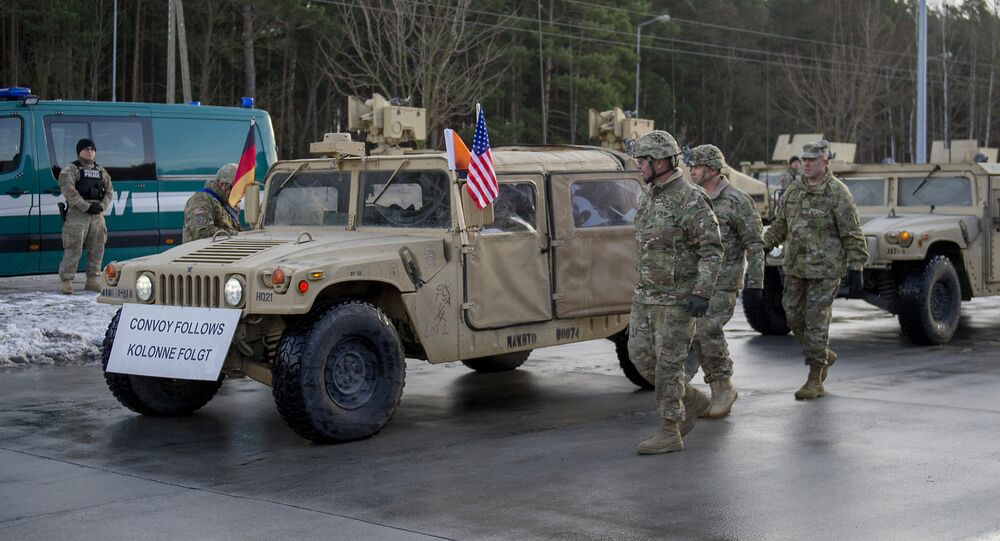 The United States and NATO have deployed additional forces and military equipment to Central and Eastern European nations, as well as the Baltic states, citing security concerns as the reason, but the largest buildup in the bloc's history is not aimed at protecting NATO's eastern flank, Professor Janusz Niedzwiedzki told Sputnik.

"Let's be honest, it is not about protecting eastern borders of the European Union or NATO's eastern flank, whatever you call it. In reality this is another deployment of military equipment closer to the Russian border," he said.

Niedzwiedzki, press secretary of the head of the Warsaw University of Technology, mentioned two possible implications of NATO's latest move. Russia could well respond by enhancing its military forces deployed to Kaliningrad. Moscow will also put more effort into resolving the Ukrainian conflict to its own advantage.

© AP Photo / Alik Keplicz
NATO Military Build-Up in E Europe: 'Trump Will Continue Where Obama Stopped'
Last week, approximately 4,000 US soldiers, as well as hundreds of armored vehicles and more than 80 main battle tanks arrived in Germany as part of Operation Atlantic Resolve. This program is aimed at ensuring Washington's European allies that the US is committed to protecting them from Moscow, although Russian officials have repeatedly said that the country does not pose a threat to any of its neighbors or any nation in the world.

Polish Prime Minister Beata Szydlo welcomed US troops on Saturday, saying that they "represent the best, the greatest army in the world." Niedzwiedzki observed that this greeting could point to how biased Polish elites are and said that the Poles were not uniform in their stance on NATO's latest deployment.

"A recent survey conducted by IBRIS on request of Radio Zet earlier in January shows that not all Poles are happy about US soldiers coming to Poland. More than 36 percent think that [US military] presence does not enhance national security, but instead undermines it," he said. "This is a kind of spell aimed at convincing the Poles that things are better than they truly are."

"These are the people who on the one hand have an unhealthy admiration for military power and combat action, while on the other share deep anti-Russian sentiments. This combination has helped to build a vision of a conflict which in their opinion must necessarily take place sooner or later," he said.

The analyst said that hardliners in Poland have failed to explain way a conflict with Russia is imminent. He maintained that there are no unresolved disputes between the two nations, adding that existing tensions are symbolic. They have to do with "monuments, Katyn or Smolensk. They cannot be referred to as real political conflicts, which could spark a war," he said.