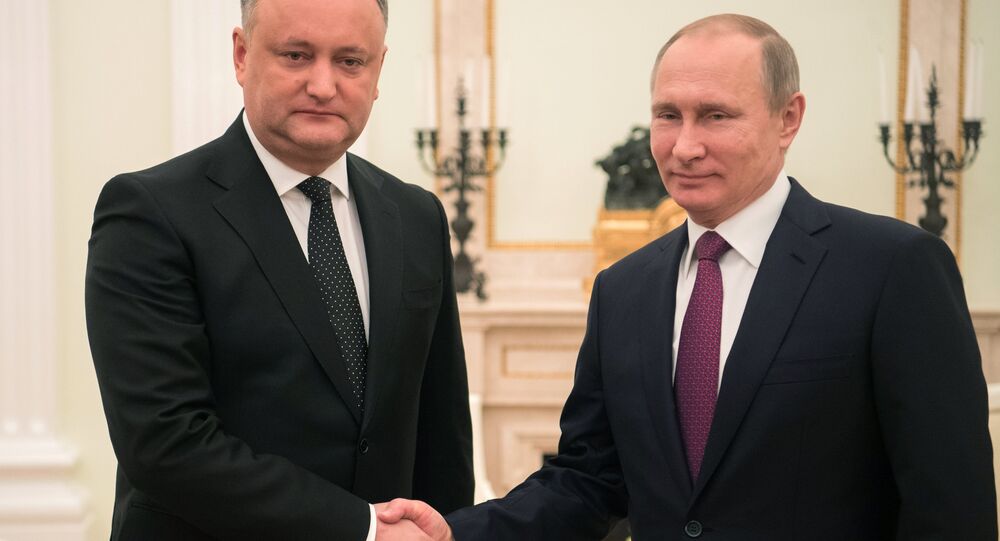 Russian President Vladimir Putin expressed hope on Tuesday that the ongoing visit of his Moldovan counterpart Igor Dodon would contribute to the improvement of bilateral relations between the two nations.

MOSCOW (Sputnik) — On Monday, Dodon started a three-day visit to the Russian capital at the invitation of Putin. The agenda of the visit involves a number of meetings with the Russian leadership and discussions of bilateral cooperation.

"I am very glad to welcome you in Moscow. Moldova is Russia's important partner in the region. Unfortunately we know that relations between our countries face not the best times… I hope very much that you first visit to Russia — it is your first foreign visit as president — will give good momentum to the development of our interstate links in all spheres," Putin said during a meeting with Dodon.

© Sputnik / Miroslav Rotar
Signing of Several 2014 Moldova-EU Agreements Result of Hasty Decisions - Dodon
Putin added that he congratulated Dodon on his victory in the presidential election.

Dodon assumed office on December 23, 2016 after securing 52.12 percent of vote in the second round of the presidential election.

During his election campaign the Moldovan politician stressed the need to improve Chisinau's relations with Moscow, especially in the economic sphere, and even suggested that once he becomes president Moldova would hold a referendum on whether the country should withdraw from the 2014 political and trade agreement with the European Union and instead join the Russia-led Eurasian Economic Community.