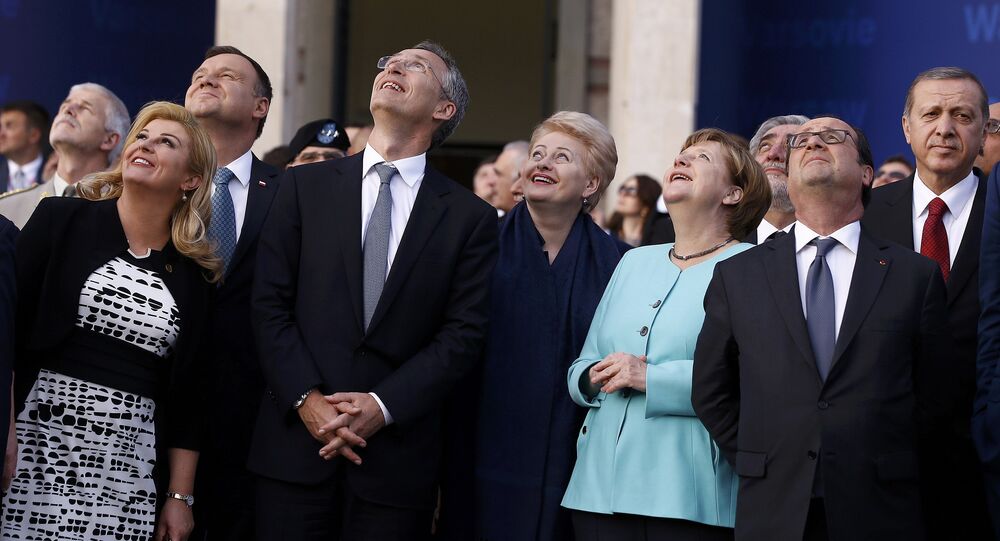 In a recent interview with The Times newspaper, United States President-elect Donald Trump claims that NATO is an obsolete organization since it is not much engaged in fighting terrorism and its members are not contributing enough.

© AP Photo / Evan Vucci
Trump Speaks: US President-Elect's Statements Before and After Election
"I said a long time ago that NATO had problems. Number one it was obsolete, because it was designed many, many years ago. Number two the countries aren’t paying what they’re supposed to pay. I took such heat, when I said NATO was obsolete. It’s obsolete because it wasn’t taking care of terror," Trump told the newspaper.

"With that being said, NATO is very important to me. There are five countries that are paying what they're supposed to. Five. It's not much," the President-elect added.

The controversial remark has been perceived as worrying by many European politicians.

© Flickr / Rock Cohen
French Ex-PM Valls Calls Trump’s Remarks on EU, NATO 'Declaration of War'
On Monday, French Foreign Minister Jean-Marc Ayrault said the European Union must stand united in the face of Trump’s comments, while his German counterpart Frank-Walter Steinmeier admitted that Trump’s comments were met with "astonishment," but noted the existing "contradiction" between Trump’s message and that of his nominated cabinet, calling for a wait-and-see approach.

According to Spanish military expert and journalist Juan Aguilar, by his statements Trump "delegitimizes" the alliance and proves that its existence "does not make sense."

"This rhetoric can be explained by the fact that Trump is really interested in normalizing ties with Russia and easing global tensions. Another reason is that NATO is a serious financial burden. The US gives nearly 50 percent for the alliance. Many other members cannot afford those payments due to domestic financial troubles. And the most important, NATO doesn’t spend that money on protection from real threats," Aguilar said in an interview with Sputnik Mundo.

The journalist claimed that currently there is a "risk of a collapse of NATO" since there is an increasing number of countries leaning towards quitting the alliance "due to pressure."

© Sputnik / Alexander Vilf
NATO Ignoring Russia's Attempts to Restore Dialogue, But 'Things Are Changing'
"In its current form, NATO is not a defensive alliance. In recent years, the alliance has proved itself an offensive mechanism," the journalist said.

He also suggested that Trump is "really set to reform the alliance."

"The US needs their allies as well as the allies need Washington. I think that Trump pointed to certain problems usually ignored by many. NATO is a relic of the West-East standoff in the Cold War. At the time, it made sense. But it is too monolithic in the contemporary polymorphous reality," he told Sputnik French.

According to Jacobelli, Donald Trump wants closer ties with Moscow and this is a "pragmatic and clever step."

"The West and Russia has common enemies today. We can see it in Syria and Iraq. It is crucial that we can cooperate and fight the common enemy, without looking back at the old alliances," he concluded.

EU Must Prove Both Own, NATO's Usefulness to Trump - Belgium's Foreign Minister