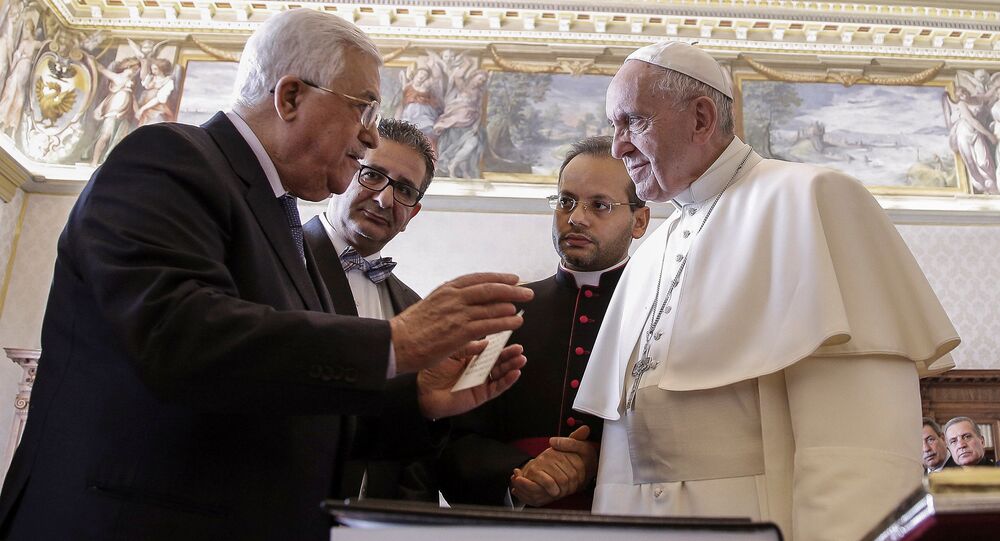 President Mahmoud Abbas and Pope Francis exchanged gifts and discussed the opening of the Palestinian embassy to the Holy See.

ROME (Sputnik) – Palestinian President Mahmoud Abbas said on Saturday the meeting with Pope Francis in the Vatican was a sign of the pope’s warm disposition toward the Palestinians.

"This signifies that Pope loves Palestinian people and loves peace," Abbas said, following the meeting, as quoted by the Corriere della Sera newspaper.

The meeting lasted for 23 minutes and included the exchange of gifts between Pope Francis and Abbas, the newspaper reported.

© REUTERS / Darren Ornitz
Two-State Solution 'Holds the Key to Israeli-Palestinian Peace'
In June 2015, the Vatican signed its first agreement on full-scale bilateral relations with Palestine confirming its support of an Israeli-Palestinian two-state solution. The historic agreement was signed in the Vatican by Palestine’s Minister of Foreign Affairs Riyad Maliki and his Holy See counterpart Archbishop Paul Richard Gallagher.

Palestinians seek diplomatic recognition for their independent state in the area of the West Bank, including East Jerusalem, an area partially occupied by Israel, and the Gaza Strip. The Palestinian Authority has asked Israel to pull out from territories it seized in 1967.

Over 130 UN members, including the Vatican have recognized the State of Palestine to date.

On Sunday, Paris is going to host the conference on the settlement of the Israeli-Palestinian conflict. Israel refused to take part in the event, saying that it preferred to hold bilateral talks directly with the Palestinian side. Palestine intends to promote the two-state solution as the main means of settling the conflict with Israel.

Justice in Palestine; Efforts Ramp Up to Stop Trump's Agenda