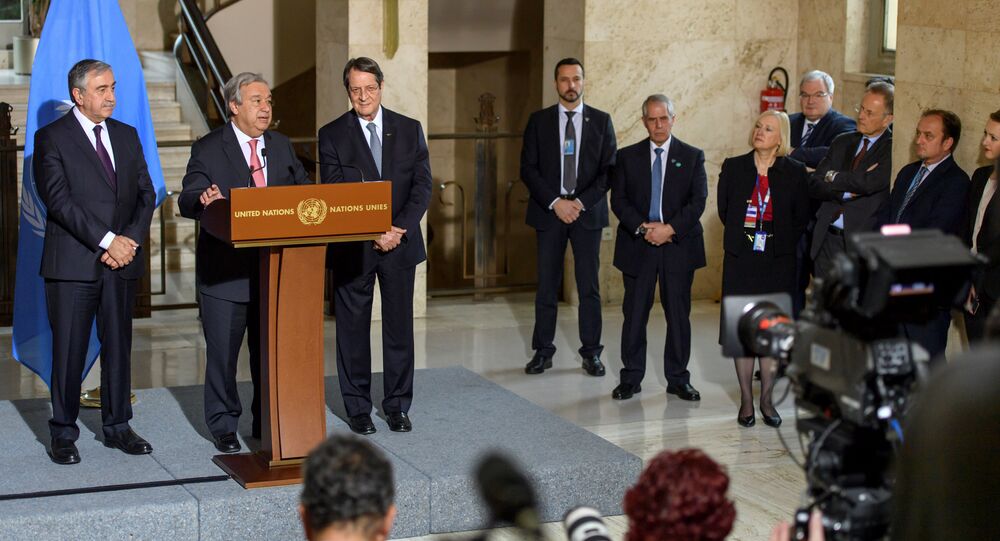 The Cyprus reunification talks with the participation of Turkish Cypriot leader Mustafa Akinci and President of Cyprus Nicos Anastasiades started in Geneva on Monday and showed signs of progress.

MOSCOW (Sputnik) — Significant progress was made at the UN-facilitated Cyprus reunification talks held this week in Geneva, with the agreement likely to be reached as the parties reconvene on January 18.

© AFP 2020 / PHILIPPE DESMAZES
Progress Made in Cyprus Peace Talks in Geneva - President
The Cyprus reunification talks with the participation of Turkish Cypriot leader Mustafa Akinci and President of Cyprus Nicos Anastasiades started in Geneva on Monday. On Wednesday, the two sides exchanged maps outlining the areas of control for Greek and Turkish communities.

On Thursday, an international conference took place with the participation of guarantor countries — Greece, Turkey and the United Kingdom, as well as the European Union whose delegation was led by European Commission President Jean-Claude Juncker.

The talks are set to resume on Wednesday, when the working group will make a list of particular issues and tools to be discussed.

On Thursday, UN Secretary-General Antonio Guterres said that the talks, which began with a very constructive discussion, might led to a breakthrough in the negotiations, adding that reaching an agreement could become a symbol of hope.

"We are facing so many situations of disasters. We badly need a symbol of hope. I strongly believe Cyprus can be the symbol of hope at the beginning of 2017," Guterres said.

He highlighted that the breakthrough in negotiations was something what the people of Cyprus deserved and what the world needed.

© AFP 2020 / Adem Altan
Erdogan: Turkish Troops in Cyprus for Good
President of the European Commission Jean-Claude Juncker said Thursday that Europe must not let go of the moment for uniting Cyprus.

Cyprus President Nicos Anastasiades, commenting on the talks results, said that a great progress was reached and there was a hope of signing a reunification agreement.

"For the first time Turkey takes an active part in discussions regarding security issues and guarantees," Anastasiades added.

UK Foreign Secretary Boris Johnson praised on Friday progress in talks, adding that that agreement on Cyprus reunification was within reach.

"I welcome the real progress made towards finding a solution to the Cyprus settlement over the last few days, in particular on the future security of a united Cyprus. Expert talks will start on 18 January ahead of further political level talks later this month. With continued commitment and political will I believe a historical agreement is within reach," Johnson said in a statement, published on the UK government's website.

During the talks an it was suggested to dismantle the guarantor system, established by a 1960 treaty, and make the European Union solely responsible for the Cyprus unity.

Cyprus's ruling right-wing Democratic Rally party (DISY) expressed hope on Thursday that Turkey would agree that the system of guarantees was "anachronistic" and should be abandoned, as it contradicted the island country's sovereignty.

"We hope that Turkey will accept the position of Cyprus, Greece and the EU, that [the system of] guarantees is an anachronistic system, which was introduced in 1960, and unacceptable system that contradicts the independence of the State of Cyprus," Prodromou told Sputnik, adding that a united Cyprus, which is EU member state, did not need any guarantees from any third party.

© REUTERS / Philippe Desmazes/Pool
Cyprus International Conference to Continue January 18
Ankara opposed the idea of making the European Union a guarantor of Cyprus reunification, considering that the bloc was unable to ensure security on the island and adherence to a reunification deal.

"Turkish Republic of Northern Cyprus and Ankara share the opinion that Turkey must maintain its status of a guarantor country, while stationing of the Turkish troops on the island should continue… Which of the conflicts up to this day has the European Union managed to prevent?.. The structure that cannot resolve the existing problems and adheres to the double standards policy on many issues will of course be unable to provide security on the island," Turkish Foreign Minister Mevlut Cavusoglu was quoted as saying on Friday by the Anadolu news agency.

The foreign minister added that claims that the European Union could act as a reunification guarantor sound like fiction.

Later in the day, Turkish President Recep Tayyip Erdogan said the withdrawal of Turkish troops from Cyprus, which Nicosia considers crucial for reunification, was out of the question.

"Turkey will remain in Cyprus. For the Turkish military to leave Cyprus is entirely out of the question," Erdogan said in remarks broadcast by Turkey's NTV station.

He emphasized that Greece should not expect a solution to the problem of the island without Turkey as a guarantor country.

Thanos Dokos, the director general of ELIAMEP (Hellenic Foundation for European & Foreign Policy), told Sputnik on Friday that both dismantling of guarantors system and removal of Turkish troops were possible in case Ankara showed its goodwill.

"A compromise on a phased withdrawal and an agreed timetable for the full cancellation of third party guarantees is feasible, provided Turkey demonstrates the necessary good will," Dokos said.

© REUTERS / Yiannis Kourtoglou
'No Breakthrough in Too Hasty Cyprus Talks' - Think Tank Academic
He added that a deal could be guaranteed by either the European Union or the UN Security Council, while the United Kingdom could be part of the solution as a P5 (UN Security Council's five permanent members) country.

Given that any deal reached in Geneva would also have to be backed by both communities in separate referendums later this year, Dokos believes that the majority of Greek Cypriots would be more likely to choose the relative safety of the status quo rather than unification, unless the deal stipulated considerable concessions regarding territory, compensation of properties and withdrawal of Turkish troops.