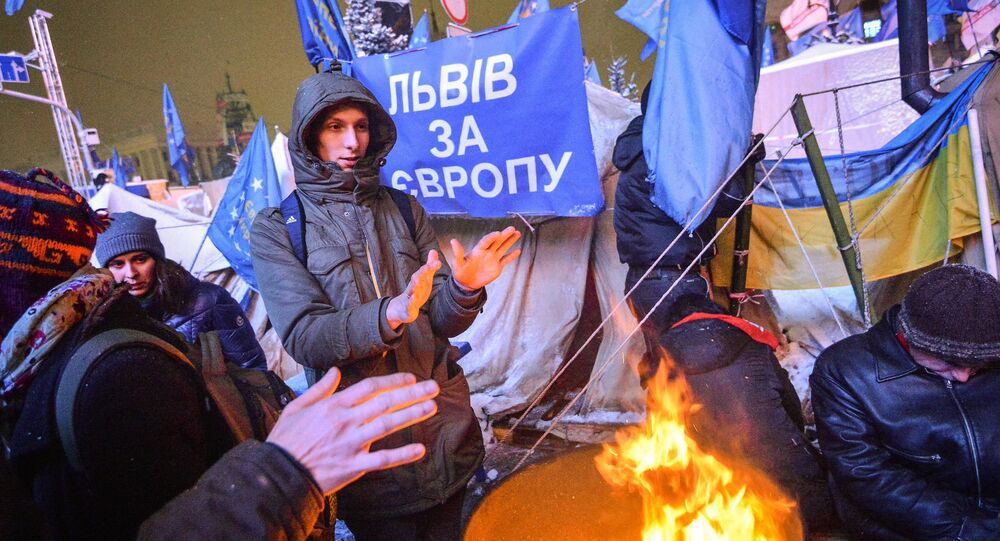 Growing disillusionment with the EU spreads its shadow over Ukraine. Although Brussels pledged to grant Ukrainians visa-free travel to the EU Schengen Zone in 2017, some in Ukraine have doubts that Brussels is prepared to fulfill its promises.

© AP Photo / Alik Keplicz
Visa-Free Regime for Ukraine? 'Another Kind of Danger Europe Will Have to Face'
Ukraine's fervor for the EU has been steadily waning despite repeated promises of support and visa-free travel from Brussels, David Stern of Politico noted, adding that most of the promises have yet to be fulfilled.

On December 15, the European Parliament approved a mechanism of suspending the visa free-regime with Ukraine under certain conditions. While the move was aimed at bringing Kiev one step closer to the much-anticipated deal, the formulation sounded rather discouraging.

"For Ukrainians, visa-free travel is an emotional and symbolic subject, holding up the prospect of a tangible achievement from the pro-European revolution three years ago. EU officials have promised the issue will finally be resolved in 2017," Stern wrote, adding that many in Ukraine still have their doubts that Brussels will deliver on its promises.

"This uncertainty is helping fuel increasing disenchantment with the EU," the journalist noted.

He added that "the majority of Ukrainians still cling to the dream of eventually joining" the bloc.

However, "after the initial euphoria following the revolution, their fervor for the EU has been steadily waning," he stressed.

© Sputnik / Pavel Palamarchuk
Dutch Think Tank to Take Gov’t to Court to Oppose EU ‘Compromise’ on Ukraine
To add to the Ukrainians' growing disillusionment with Brussels, the European Council stated in December that the EU-Ukraine Association deal will neither make the Eastern European country a candidate for the bloc nor oblige EU member states to provide military assistance to Kiev.

The amendment to the Association Agreement was made at the request of Dutch Prime Minister Mark Rutte and with good reason: in April 2016 the majority of Dutch referendum voters said "no" to the EU-Ukraine association treaty.

"The Agreement does not confer on Ukraine the status of a candidate country for accession to the Union, nor does it constitute a commitment to confer such status to Ukraine in the future," the European Council's document read.

"It does not contain an obligation for the Union or its Member States to provide collective security guarantees or other military aid or assistance to Ukraine… [and] does not grant to Ukrainian nationals… the right to reside and work freely within the territory of the Member States," the conclusions stated.

© AFP 2020 / HATIM KAGHAT
A serviceman patrols on the Grand-Place (Groote Markt) on the sidelines of the "winter wonders" Christmas market, in Brussels

Commenting on the matter Francisco de Borja Lasheras, Head of ECFR (European Council of Foreign Relations) Madrid Office noted in his December op-ed that the EU's image "has again deteriorated" in the eyes of Ukrainians, "obscuring substantial assistance in other areas."

"Rightly or wrongly, the perception is that key [EU] member states have dragged their feet and failed to honor their promises to Ukraine," de Borja Lasheras emphasized.

© Sputnik / Evgenia Novozhenina
AfD Official: Too Early to Abolish Visas Between EU, 'Unstable' Ukraine, Georgia
"There is also a logical concern about the rise of anti-migration and Putin-friendly forces on both sides of the Atlantic, and questions about the future of the EU," he added.

It appears that the ongoing refugee crisis and the burden of anti-Russian sanctions have made EU policymakers less enthusiastic about establishing closer relations with Ukraine.

In his December interview with Radio Sputnik, Robert Oulds, political analyst and Director of the London-based Bruges Group, highlighted that Ukraine currently "suffers from a great deal of economic hardships."

"The Ukrainian economy has been severely damaged," Oulds said, adding that the country's citizens are likely to seek a better life in the EU after the introduction of the visa-free regime.

Meanwhile, the European Union struggles to cope with the ongoing migration crisis. The visa-free regime with Kiev could result in yet another influx of migrants from Ukraine, according to Oulds. This could pose a serious challenge to European states, he believes.

For his part, Leif-Erik Holm, the Chairman of Alternative for Germany (AfD) in the state of Mecklenburg-West Pomerania, argues that the EU should avoid opening its borders to "unstable" countries.

"Currently we can see an upsurge of migrants from the East. In my opinion we should not introduce a visa-free regime with very unstable countries at all. We can think about such a move in the long-term, when these countries actually become stable democracies," Leif-Erik Holm told Sputnik in late December.

In contrast to the euphoria surrounding the 2014 Euromaidan revolution, there is a growing disenchantment that now spreads its shadow over Kiev and the EU's capitals.