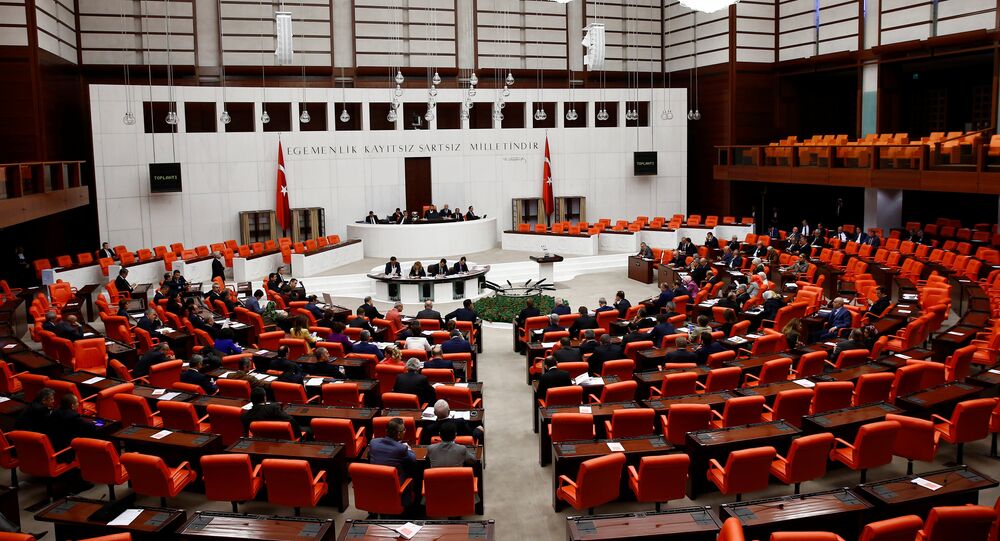 The Turkish Parliament adopted the main and most debated articles of a controversial constitutional reform package that stipulates a transition to a presidential system of governance, local media reported Friday.

© AFP 2020 / OZAN KOSE
Turkey's Constitutional Amendments 'Basis for Dictatorship' - Opposition MP
MOSCOW (Sputnik) – According to the Anadolu news agency, the provisions in question are articles 7 and 8.

Article 7 deals with the requirements for a presidential candidate, such as his age, education and citizenship. The provision also lifts the restrictions currently imposed on the president to have links with a political party. The article has sparked concerns over the potential effect it would have on the leader’s “impartiality.”

The voting on the article was reportedly held late on Thursday and it was passed with 340 of the 550 lawmakers.

At the same time, Article 8 stipulates that the president will have the powers to appoint and dismiss ministers. The parliament approved the provision early on Friday, the media reported, adding that it passed 340 – 135.

Voting on the remaining 10 articles is set to continue through the day.

Mustafa Sentop, a member of the ruling Justice and Development Party (AKP), said Thursday that if the Grand National Assembly fails to adopt the constitutional amendments to switch to a presidential system of governance, Turkey may hold early parliamentary election this year.

Draft of Turkey's New Constitution to Be Submitted to Parliament Friday