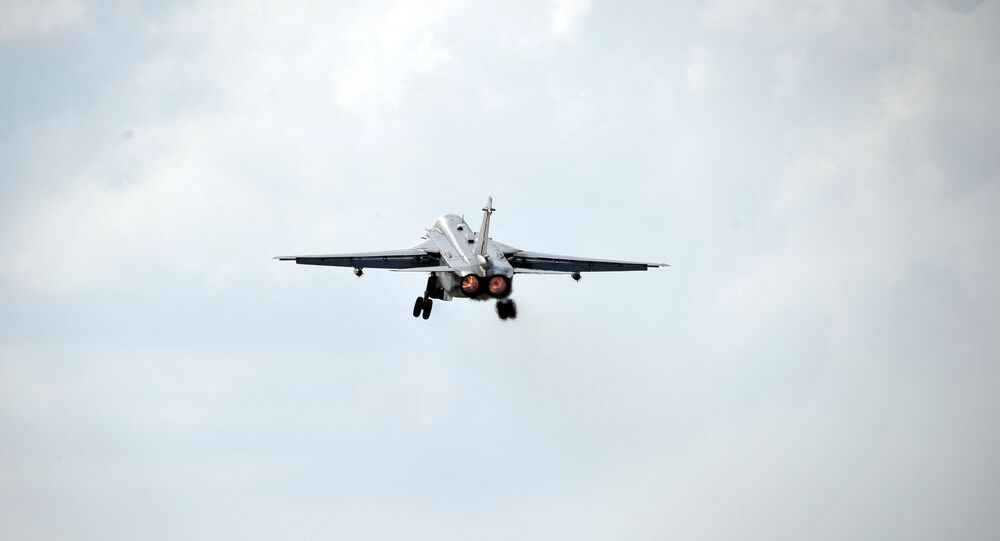 Russian pilots engaged in counterterrorism missions in Syria have no reason to provoke US-led coalition aircraft since the Syrian crisis is on the path to being resolved through diplomatic means, geopolitics expert Konstantin Sokolov told Radio Sputnik, adding that saying otherwise is meant to pursue two goals.

"For years Western Armed Forces have pretended that they were doing something in Syria and they would have continued this make-believe, but the situation has drastically changed since Russia became involved. There are no reasons to provoke the US-led coalition, which has done nothing in Syria, at a time when the political resolution of the Syrian conflict is looming. This formal nitpicking is solely meant to delay the political resolution and help them gain maximum advantage in this process," he explained.

© REUTERS / Omar Sanadiki
Moscow 'Far More Successful' at Tackling Daesh in Syria Than Washington in Iraq
Earlier, the WSJ reported that US pilots experience close calls in the crowded Syrian skies despite a US-Russian agreement which was signed in October 2015 to mitigate incidents in Syrian airspace. Russian aviators are ostensibly "either unaware of the rules of the road or unable or unwilling to follow them consistently," the newspaper asserted.

The report cited an incident which took place last fall. On October 17, US aircraft E-3 AWACS approached the Russian Su-35 fighter jet at a distance of less than 500 meters, the Russian Ministry of Defense reported, adding that the representatives of the US Air Force Command apologized for what had happened. However, the Pentagon later tried to place the blame for the incident on the Russian aircraft, claiming that it flew dangerously close to the US jet.

Ministry of defence of the Russian Federation
Carter Pursuing Two Goals by Downgrading Russia's Anti-Daesh Operation in Syria
Sokolov said that the claims directed against Russian pilots are unfounded.

"Each flight accident requires a lengthy investigation [to determine] who was right and who was wrong. History of standoffs between great powers shows that various aviation groups sometimes engage in provocative activities. In this case it remains unclear which side approached which. An investigation is needed. Right now, when the blame has been assigned based on unfounded claims it is clear that this is merely a political demarche," the analyst observed.

Russian Aerospace Forces Carried Out Over 71,000 Strikes on Terrorists in Syria

US B-52 Bomber Carried Out Strike in Syria's Idlib, Killing Over 20 Civilians