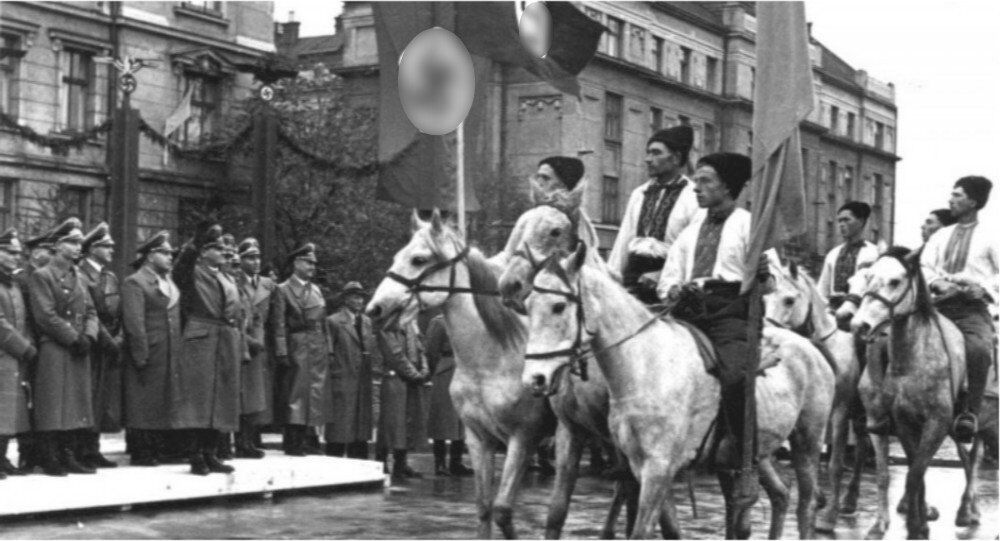 On January 1, in what has become a tradition, radicals held a torch-lit march in Kiev to mark the birthday of Stepan Bandera, a WWII-era Ukrainian nationalist leader and Nazi collaborator. Sometimes, Ukrainians get into arguments with Russians, telling them why Bandera was really a 'hero' and 'freedom fighter'. Sputnik explains why that's not true.

On Tuesday, Ukrainian Infrastructure Minister Volodymyr Omelyan proposed holding a grand ceremony to reinter the remains of Ukrainian WWII-era Nazi collaborators buried in Western Europe in Ukraine. This includes Stepan Bandera, a wartime nationalist leader who was buried in Munich, Germany after being assassinated in 1959. "They need to come back home," Omelyan wrote, in a post on his Facebook page, referring to hundreds of fighters from the Ukrainian Insurgent Army (UPA) and other paramilitary groups who fled to Western Europe and North America after the Second World War.

© AP Photo / Efrem Lukatsky
What a Shame! Ukrainian Minister Wants to Grandly Reinter Bunch of Nazi Collaborators
Of course, as a recent article by a staff writer for Russia's RIA Novosti pointed out, the Ukrainian official did not mention the horrendous war crimes committed by these so-called 'heroes'. The truth regarding the wartime activities of the Organization of Ukrainian Nationalists (OUN), and its armed wing, the UPA, as well as the nationalists who served in the ranks of the SS, has remained hidden from view in the contemporary Ukrainian nationalist narrative.

Unfortunately, RIA Novosti added, these truths cannot be hidden from the historical record, with plenty of archival documents, photos, and other materials confirming the ferocity and brutality of the Banderite nationalists in the territories that they held in their grip during the war. Below readers will find some of this evidence, together with an explanation about why Russians will never accept Bandera to be a hero to anyone, and first and foremost to Ukrainians themselves.

Although Russians remember the OUN from its collaboration with Nazi Germany, it first gained notoriety as a terrorist organization in interwar Poland, when it had Interior Minister Bronislaw Pieracki assassinated in 1934. Bandera led the organization at the time and was sentenced to death for terrorism.

© Sputnik / Alexander Mazurkevich
EU 'Lacks Courage to State the Obvious: Maidan Radicals Were Never Democratic'
However, the Nazis needed assistance in their efforts to depopulate western Ukraine, which was populated by a mixture of Ukrainians, Jews and Poles and had been part of Poland until it was incorporated into the Soviet Union. Bandera was let out of prison in Poland in 1939 and teamed up with other key OUN members in Nazi-occupied Krakow, where they would work together with German intelligence to stage the invasion of Soviet Ukraine.

Before the start of the Second World War, he and other members of the OUN received permission from Berlin to create the "Legion of Ukrainian Nationalists," out of which the Roland and Nachtigall SS battalions would eventually be formed. These troops consisted mostly of residents of Galicia, a region in modern-day western Ukraine which at the time had belonged to Poland. Roman Shukhevych, a nationalist leader who would go on to lead UPA, was appointed commander of the Nachtigall Battalion in 1941.

On June 30, 1941, one week after the commencement of Hitler's notorious Operation Barbarossa, the Wehrmacht occupied Lvov and Stepan Bandera was declared the head of an 'independent' Ukrainian State. In his "Act of Proclamation of Ukrainian Statehood," he announced that "the newly formed Ukrainian state will work closely with the National-Socialist Greater Germany, under the leadership of its leader Adolf Hitler, which is forming a new order in Europe and the world and is helping the Ukrainian People to free itself from Moscovite occupation."

Shukhevych's men arrived with the invaders. OUN fighters took an active role in the purge that followed. A single day after the invasion, the men, women and children of Lvov's Jewish population were humiliated, beaten, and sometimes shot on the spot. The transfer of the city's Jewish community to concentration camps would commence within a year. After Poland was divided in September of 1939 between Nazi Germany and the Soviet Union, the Jewish population of the city doubled to more than 200,000 due to the arrival of refugees; only about 1,000 would survive the war.

However, the Germans soon demonstrated that they had no intention of changing the status of Reichskommissariat Ukraine. Just 11 weeks after his proclamation was read, Bandera was arrested and sent to the Sachsenhausen concentration camp, where he would be held until 1944.

But the atrocities committed by the nationalists and collaborators did not end after their spiritual leader's arrest. In September 1941, after Kiev fell, the Nazis employed local nationalists to help murder over 100,000 people, most of them Jews, but also Gypsies, anti-fascist Ukrainians and Soviet prisoners of war, in what became known as the tragedy at Babi Yar.

© Photo : archive
'Glory to the liberators of Europe!' Cut-out from a newspaper in occupied Ukraine.

In 1943, by the decision of the OUN, and with approval from Nazi authorities, nationalists established the Ukrainian Insurgent Army, which quickly became known for its cruelty against Polish and Soviet civilians alike. In 1943, Roman Shukhevych left his service with the SS, and was soon appointed Supreme Commander of the UPA.

The UPA's activities in western Ukraine, in the territories of Volyn and eastern Galicia, are particularly painful for many Poles even to this day, and are arguably the most terrible page in the paramilitary group's history. Between 1943 and 1944, UPA conducted a massive campaign of ethnic cleansing in these territories, with historians estimating that between 80,000-120,000 Polish civilians were killed. The campaign was also known for its shocking brutality, with militias burning down entire villages, and using knives and axes on their victims to save bullets.

© Wikipedia /
Monastery in the village of Pidkamin, Lvov Region. Bullet holes from during the war still scar its walls. During the war, Pidkamin was a shelter for Poles and Jews, who fled their homes to hide in the village's monastery. The UPA, in collaboration with Ukrainian SS units, attacked the monastery in March 1944, killing an estimated 300 people, mostly women and children, inside the monastery, and another 500 elsewhere in the village and its environs. Pidkamin was just one of dozens of sites where UPA units committed similar atrocities.

In 1944, Stepan Bandera was released from his imprisonment, and quickly set up shop in Berlin to try to coordinate the Ukrainian nationalist resistance to the advancing Soviets by begging for support from the crumbling German war machine.

At the end of the war, Bandera and his men fled to the Allied Zone of Occupation, with some leaving for other countries and continents. Some soon went on to work for MI6 and eventually, the CIA.

As for the UPA nationalists who remained in Ukraine, they continued their insurgency against Soviet Ukrainian authorities until well after the end of the war, with the NKVD (the predecessors to the KGB) destroying the last unit only in the mid-1950s.

Unfortunately, the story didn't end there. After arriving in their new homes in Western Europe and North America, many ex-fighters continued their activities, creating propaganda, engaging in politics, and publishing massive tomes recounting the 'official history' of their activities. After the collapse of the USSR in 1991, many of these nationalists and their descendants returned to their home country, bringing their ideology, and more importantly, grant-funded textbooks for Ukrainian schools and universities, with them.

In the last two-and-a-half years, Ukrainians have gotten into heated arguments with Russians, in public, on television programs and online, complaining about why Russians, who also had their traitors during the war, including former Red Army General Andrei Vlasov, raise such a ruckus about Bandera and Shukhevych.

The response they are given is always the same: Vlasov was never turned into a hero in Russia, even after the USSR's collapse, and never will be. Moreover, Russians say, six million Ukrainians served in the Red Army during the war, while only about 100,000 served in the ranks of the UPA, with a few tens of thousands more in other polizei and SS formations. By these numbers, they say, Kiev's lionization of Bandera and his men is equally absurd.