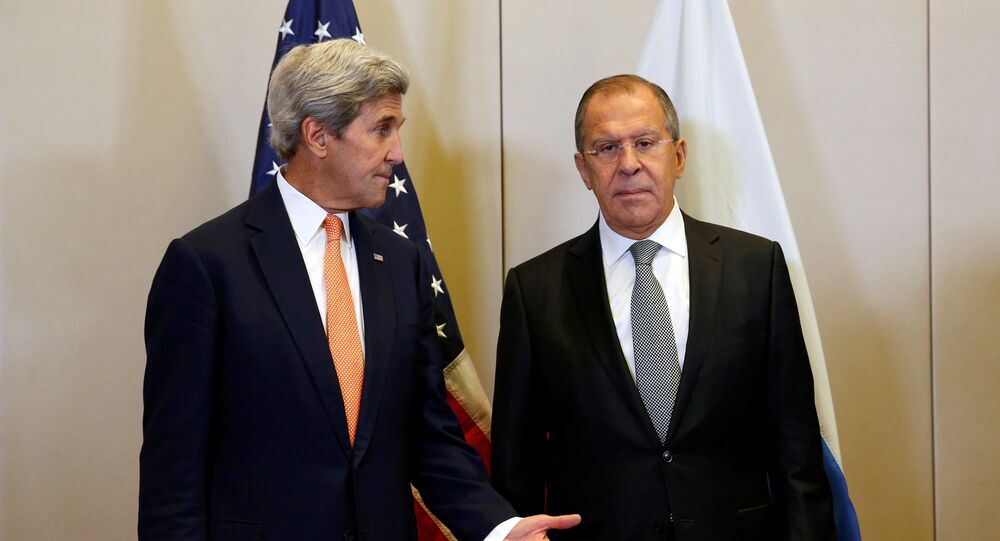 Kerry: US Should 'Remain Vigilant' While Looking to Cooperate With Russia

US Secretary of State John Kerry said in an exit memorandum that Washington should look for opportunities for cooperation with Moscow but at the same time be vigilant against alleged threats.

WASHINGTON (Sputnik) — The United States should continue to be aware of alleged threats posed by Russia while looking for areas of possible cooperation between the two nations, US Secretary of State John Kerry said in an exit memorandum on Thursday.

"Russia’s unprecedented cyber intrusions and its military intervention in Syria have also posed significant challenges to both our bilateral relationship and to international stability, and it is critical that we remain vigilant against these and other threats, even as we look for areas where it is in our interest to cooperate with Russia," Kerry stated.

© Sputnik / Natalia Seliverstova
US Diplomats Received 35 Invitations to New Year Celebrations in Kremlin
Kerry authored the memorandum ahead of his departure from office later this month, outlining what he believed were the Obama administration’s successes as well as areas of focus for the incoming administration of President-elect Donald Trump.

In the memorandum, Kerry also reiterated his position on the situation in eastern Ukraine, the war in Syria and relations with other countries such as Iran, Cuba and North Korea.

Kerry noted the Obama administration’s position that US sanctions on Russia’s defense, energy and financial sectors can be rolled back with the implementation of the Minsk agreements.

Furthermore, Kerry stressed the importance of diplomatic efforts to secure a diplomatic solution to the civil war in Syria.

© REUTERS / Yuri Gripas
Hints, Allegations and Things Left Unsaid: Obama's Most Memorable Quotes
Relations between Washington and Moscow have deteriorated over the course of Obama’s eight years in office, culminating last year with the failure of a Syrian cessation of hostilities brokered by Kerry and Russian Foreign Minister Sergei Lavrov as well as accusations by US officials that Russia sought to interfere in the presidential election.

Last week, the administration ordered the expulsion of 35 Russian diplomats, the closure of two Russian diplomatic compounds and new sanctions against six Russian individuals and five entities over Moscow’s alleged interference in the 2016 election, which the Kremlin has repeatedly denied.

Russian officials have repeatedly denied interfering in Ukraine’s affairs and the US presidential election.

US Coalition Has Been Destroying Syrian Infrastructure Since 2012 - Russian MoD