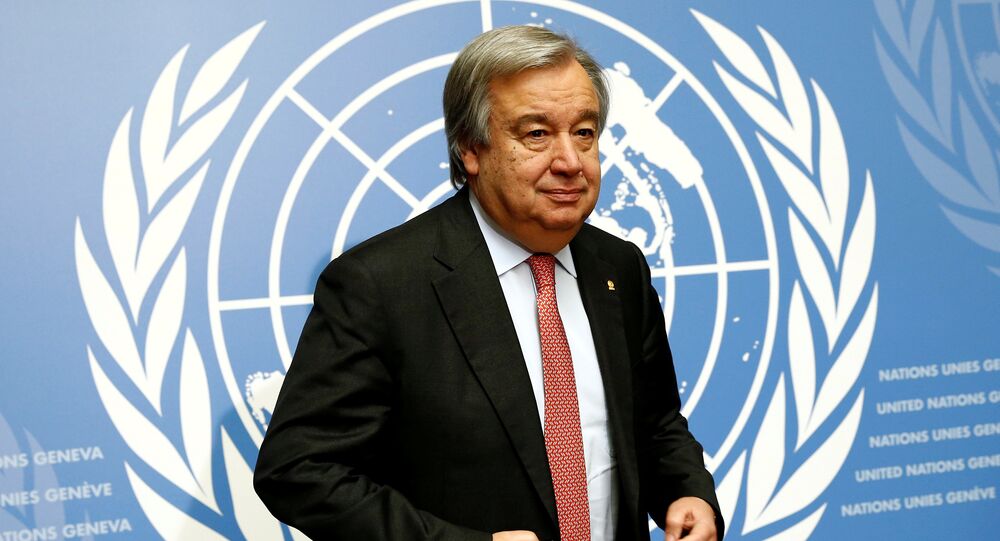 MOSCOW (Sputnik) — He succeeded Ban Ki-moon, whose term as UN chief expired at midnight on December 31, 2016.

Antonio Manuel de Oliveira Guterres was born on April 30, 1949 in Lisbon. He graduated from the Instituto Superior Tecnico in 1971 with a degree in engineering.

Guterres entered politics in 1976 when he joined the Socialist Party and was elected to Portugal's Assembly of the Republic. He served as a legislator for 17 years. While in the unicameral parliament, he was chairman of committees tasked with overseeing Portugal's economy, public finances and environmental matters. Guterres also led his party’s parliamentary faction.

From 1981 to 1983, Guterres was a member of the Council of Europe’s Parliamentary Assembly, eventually becoming chairman of the Committee on Demography, Migration and Refugees.

Guterres became secretary-general of the Portuguese Socialist Party in 1992 and prime minister of Portugal in 1995 following the Socialists’ election victory. He served in both positions until 2002.

As prime minister, Guterres was active in international efforts to end the crisis in East Timor, including a UN-backed agreement with Indonesia that put the island’s independence to a popular vote.

Guterres briefly led the European Council in 2000, where he championed the adoption of the so-called Lisbon Agenda and was co-chairman of the first EU-Africa Summit.

For many years, Guterres was an active member of the social democratic organization Socialist International. He served as the group’s vice president from 1992 to 1999 and as president from 1999 until mid-2005.

In 2005, the UN General Assembly elected Guterres to head the UN High Commissioner for Refugees (UNHCR). During his two extended terms, he oversaw budget and structural reforms at the agency and strengthened its emergency-response capacity.

On this New Year’s Day, I ask all of you to join me in making one shared resolution:

Let us make 2017 a year for peace. pic.twitter.com/UAnGtlfsaf

​Under Guterres, the UNHCR responded to the largest displacement of people since World War II, marked by wars in Syria and Iraq as well as ongoing violence in the Central African Republic, South Sudan and Yemen. During his decade at the agency, the number of forcibly displaced people worldwide increased from 21 million in 2005 to nearly 64 million by the end of 2015.

In addition to holding political office, Guterres founded the Portuguese Council for Refugees and the Portuguese Association for Consumer Protection, and he served as president of the Centro de Acao Social Universitario, a social development organization active in poor neighborhoods of Lisbon.

Guterres is fluent in Portuguese and three UN languages — English, French and Spanish. He is married and has two children.