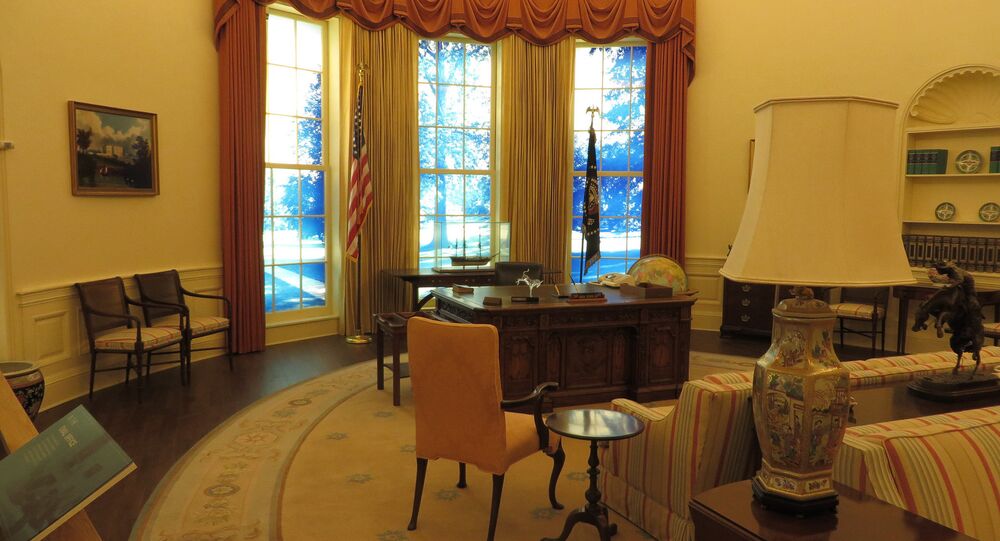 American Idol: US Presidency 'Degenerating Into a Cult'

Over the decades the American presidency has transformed into some sort of a "cult," US journalist Kevin D. Williamson writes in his op-ed for National Review. Williamson warns that the Americans are reverting from "citizens" to "subjects," led by emotions rather than common sense.

"The American presidency is degenerating into a cult," Kevin D. Williamson of National Review, a US conservative semi-monthly magazine, warns.

According to Williamson, the name of the incumbent president has been mentioned too frequently in the US media. Thus, the cable-news reported "This is Obama's last Veterans' Day as president," as if it were the story, the journalist underscored, stressing that Obama is not a veteran and "it isn't his day."

"Rock stars, the heroes who stormed the beaches at Normandy, or Jesus Christ Himself — it doesn't matter who you are next to the president," Williamson remarked.

Likewise, US President-elect Donald Trump has recently thanked himself for US Consumer Confidence index improving in December.

The U.S. Consumer Confidence Index for December surged nearly four points to 113.7, THE HIGHEST LEVEL IN MORE THAN 15 YEARS! Thanks Donald!

​"The U.S. Consumer Confidence Index for December surged nearly four points to 113.7, THE HIGHEST LEVEL IN MORE THAN 15 YEARS! Thanks Donald!" Trump tweeted this week.

Two days earlier the US President-elect wrote in his twitter: "The world was gloomy before I won — there was no hope. Now the market is up nearly 10% and Christmas spending is over a trillion dollars!"

The world was gloomy before I won — there was no hope. Now the market is up nearly 10% and Christmas spending is over a trillion dollars!

​According to the journalist this self-celebrating trend spells trouble for the US. He reminded his readers of the American founders who were "deeply suspicious of pomp and circumstance."

© Flickr / Kent Wang
Going Down Swinging: Obama Slaps New Sanctions on Russia, Expels Diplomats
Williamson recalled a famous story of US President Abraham Lincoln shining his shoes in the presence of a European ambassador. The shocked diplomat told Lincoln that a man of his stature would never shine his own shoes. "Whose shoes would he shine?" Lincoln asked.

"For more than two centuries, we Americans have been working to make government subject to us rather than the other way around, to make it our instrument rather than our master," Williamson noted.

Indeed, back in 2009 when Barack Obama took office he was publicly celebrated as some sort of a "rock star."

"[Obama] is really a rock star as a politician," former US Ambassador to the UN John Danforth said, as quoted by the media outlet, and added: "But I guess my response is: So what?… How do you get from that to doing something?"

The media fuss over Barack Obama's persona failed to avert the public's attention from his controversial foreign policies toward the Middle East and Russia.

Tried to start a war with Russia✔️

​And still Obama believes that he would have won if he had run in 2016.

"I am confident in this vision because I'm confident that if I had run again… I think I could've mobilized a majority of the American people to rally behind it," Obama said in an interview with David Axelrod for The Axe Files.

Trump's response was not long in coming.

"President Obama said that he thinks he would have won against me. He should say that but I say NO WAY! — jobs leaving, ISIS, OCare, etc.," the US President-elect tweeted.

President Obama said that he thinks he would have won against me. He should say that but I say NO WAY! — jobs leaving, ISIS, OCare, etc.

​The trend of American presidency transforming into a cult is worrisome, according to Williamson.

"We are in the process — late in the process, I'm afraid — of reverting from citizens to subjects. Subjects are led by their emotions, mainly terror and greed. They need not be intellectually or morally engaged — their attitude toward government is a lot like that of Trump's old pal Roy Cohn: 'Don't tell me what the law is. Tell me who the judge is,'" the journalist emphasized.