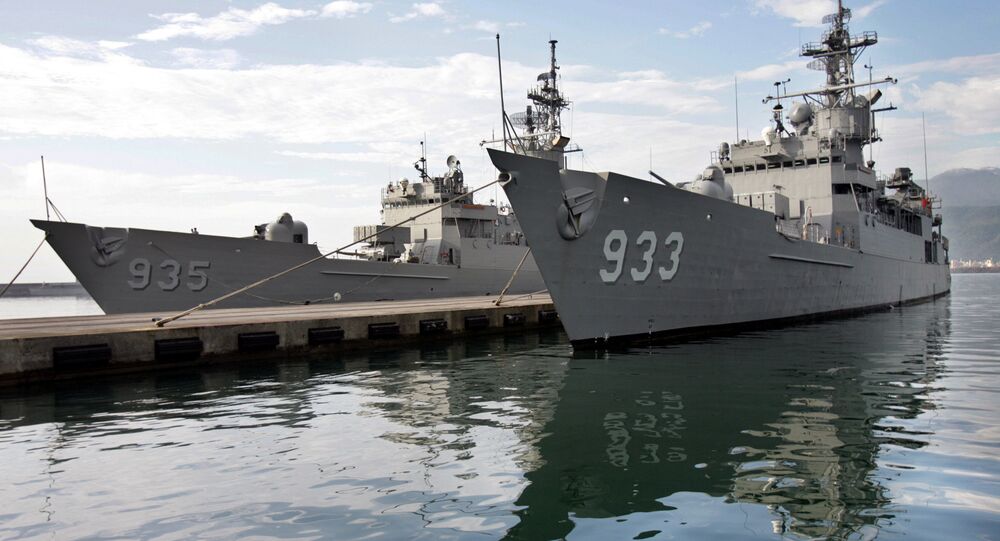 The US defense budget for 2017 includes a section on the US-Taiwanese military exchange program, which China regards as interference in its domestic affairs. The legislation comes on the heels of US President-elect Donald Trump's controversial remarks on the "One China" policy.

"We are firmly against the Taiwan-related contents in the US act…. We are strongly discontent with the US for signing this act," Hua emphasized.

© AP Photo / Chiang Ying-ying
Beijing Slams Washington for Taiwan Content in US Defense Spending Bill
For the first time since 1979, the document includes a section that allows high-ranking civilian officials and military officers to visit Taiwan for exchanges.

It further specifies that the term "senior military officer" means a general or flag officer of the Armed Forces on active duty, while the term "senior official" is used in the document to describe "a civilian official of the Department of Defense at the level of Assistant Secretary of Defense or above."

"Although the Taiwan-related content in the US Act has no binding legal force, it still severely violates the three joint communiqués and interferes in China's domestic affairs. China will by no means accept this," she highlighted.

© Sputnik / Sergey Pyatakov
Navarro's Appointment: 'Trump's Going to Focus on Trade Wars, Not Real Wars'
In accordance with the One China Principle, the People's Republic of China sees Taiwan as an integral part of its territory. Conversely, Taiwan's leadership believes it is in fact the de jure government of the Republic of China.

"We urge the US side to honor its commitment on the Taiwan question, put an end to military exchanges with and arms sales to Taiwan and avoid undermining China-US relations or cross-Straits peace and stability," the Chinese Foreign Ministry spokeswoman underscored.

According to Sputnik Chinese, Hua's remarks were primarily addressed not to the outgoing Obama administration but to that of US President-elect Donald Trump. The Chinese leadership has undoubtedly taken Trump's "unpredictability" into account and is now signaling that Beijing won't accept shattering the pillars of Sino-American relations.

In this respect, the US-Chinese consensus on Taiwan plays a pivotal role in the eyes of Beijing.

© AFP 2020 / JEFF KOWALSKY
'Patience Bears Sweet Fruit': Beijing Adopted Watch-and-Wait Policy Toward Trump
In his recent interview with People's Daily (Renmin Ribao) Chinese Minister of Foreign Affairs Wang noted that the Sino-American relationship is likely to have bumps in the road. However, Wang underscored that if the two powers take each other's interests into consideration and show mutual respect, they will maintain sustainable long-term cooperation.

Beijing has adopted the "watch-and-wait" approach toward Washington: it is still unclear what lies at the root of the US-Taiwanese "exchange program" and Trump's controversial remarks regarding the "One China" policy.

"It would be unrealistic for Taiwan to take it as extra protection from Washington and think it will become safer," The Global Times' editorial said, commenting on the legislation. "The military exchanges between Washington and Taiwan bear more political symbolism than anything else."

For his part, Zhang Tengjun, an assistant research fellow at the China Institute of International Studies, noted in his op-ed for The Global Times that "it is for sure that the Trump government will recalibrate its Taiwan policy and the Taiwan question will be brought up more often between China and the US."

However, the Chinese academic predicted that "by dealing with the Taiwan question like doing business, Trump might have [invited] repercussions that he has never anticipated."

"Trump seems unaware that China regards the one-China policy as a foundation for all its diplomatic ties with other countries, an essential term that shall not be traded on… Unlike other issues, any negotiation over the Taiwan question will not be accepted," Zhang emphasized.