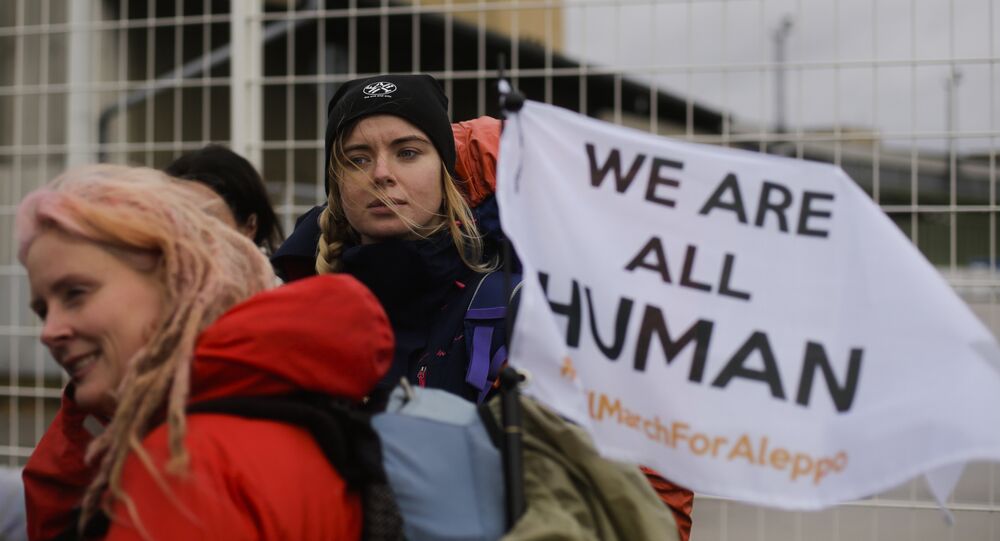 On Monday, activists in Germany kicked off their 3,000 km journey from Berlin to Aleppo. Calling for an end to the siege of the city (which actually ended earlier this month), activists say they want to "stop the massacre of Syrian civilians." But according to some observers, the question is whether they can get some refugees to go back with them.

© Sputnik /
Marching the Refugees Out
The march, which organizers have dubbed the Civil March for Aleppo, began Berlin Monday morning, and plans to wind its way through Germany, the Czech Republic, Austria, Slovenia, Croatia, Serbia, Macedonia, Greece and Turkey before arriving in Syria. Activists have calculated that an average speed of 20 km a day means they will reach Syria in three and a half months. The march's Facebook page has already garnered over 2,800 supporters.

According to the organizers' website, which features information in 12 languages, including Arabic and Russian, they deliberately plan to travel the so-called "refugee route" taken by the Syrian refugees as they arrive in Western Europe, "just in the opposite direction."

What's the purpose of the action? The group's manifesto is vague, saying that activists want to end the fighting in the city of Aleppo, and that they "will not tolerate the siege of Aleppo anymore."

© AFP 2020 / STRINGER
No Rest for the Weary: Syrian Army Presses On With Offensive in Western Damascus (VIDEO)
In fact, of course, fighting for Aleppo City's eastern militant-held portion ended earlier this month, with the government declaring victory. Last week, Syrian army forces confirmed that the entire city has now been liberated, with remaining fighters and their families evacuated to Turkey and areas of Syria still under militant control.

Saying that the activists can't "sit in front of our laptops and do nothing" any longer, the Frequently Asked Questions section of the pacifist group's website notes that they don't actually have a solution to the war, but hope that the UN and other international institutions "that can stop the massacre of Syrian civilians hear us before we stand on the border."

The group's website emphasizes that they don't represent "any specific political parties or organizations," and is composed of "random, average people." The protest action's organizer is photographer and journalist Anna Alboth.

Speaking to journalists on Monday shortly before the start of the march, Alboth explained that the group is walking "for Aleppo and other besieged cities," and that they "want to put the attention of the whole world on the situation that is happening." The activist believes that if the group receives enough attention, more attention can then be focused on the situation in Syria.

Ultimately, the group says that its main purpose is to save civilian lives, in the same way that "the refugees had come [to Europe] to save their lives."

© AFP 2020 / LOUAI BESHARA
Mass Graves in Aleppo Fuel Suspicion of So-Called 'Moderate Opposition' in Syria
"We're carrying these white flags to let the whole world know our message: enough is enough. This war has to stop!" its manifesto reads. "And this war can be stopped. This war can be ended with a few strokes of a pen," it adds.

According to a recent poll conducted for Sputnik, nearly half of Germans believe that Europe's migrant crisis has changed the situation in their country 'for the worse' in 2016. In light of this, Sputnik Germany suggested that the logical question that arises now is: will some of Germany's million plus refugees take after the pacifists and follow them back home to Syria?

Syrian Army Presses On With Offensive in Western Damascus (VIDEO)