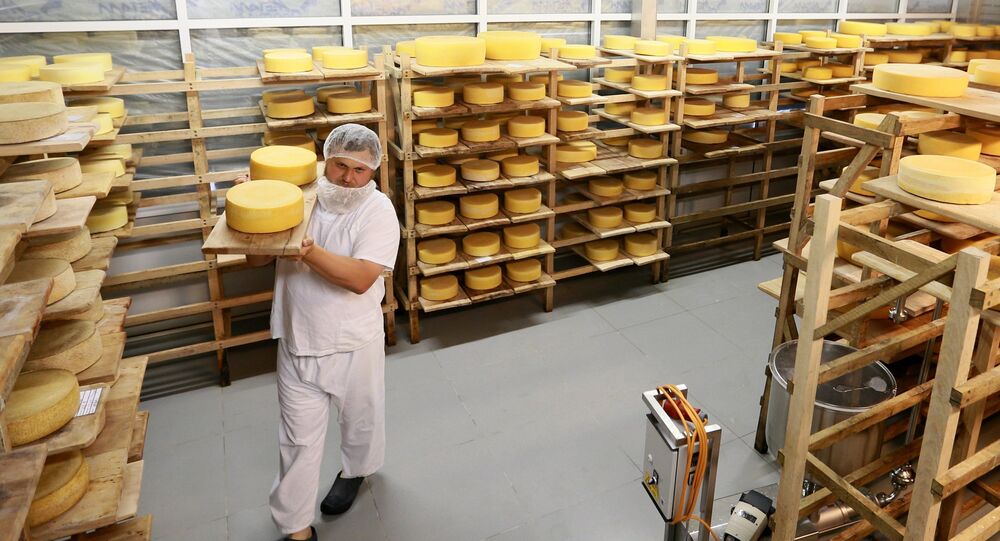 Earlier this month, European leaders agreed to extend anti-Russian economic sanctions for another six months. However, Russian permanent representative to the EU Vladimir Chizhov says that as the international situation continues to shift, so too will Europe's will to enforce its self-harming policy continue to weaken.

In an extended interview for Radio Sputnik on Tuesday, Chizhov outlined the prospects for the future of Russian-European relations. According to the diplomat, the good news is that political elites in the EU are gradually coming to realize the absurdity of the deadlock in relations between Russia and Brussels.

© REUTERS / Jacky Naegelen
French Presidential Candidate Le Pen Wants to Lift Anti-Russia Sanctions
The diplomat admitted that today, relations between Russia and the supranational bloc cannot be called normal; this situation, he added, has been the result of Brussels' short-sightedness in its policy toward Moscow, including the policy of anti-Russian economic sanctions. The EU's position has in turn been influenced by pressures from the US.

"All this has led relations to their current state, and has brought the EU's policy toward Russia to a deadlock," Chizhov noted. "So far, unfortunately, our partners have not been able to find a way out of this impasse. A question that can be asked is: How much did they really want to find it?"

Thankfully, the diplomat said, a new awareness "has gripped the mass of the EU's political elite" of the need to change this state of affairs. "And as soon as the EU is able to find the necessary political will for the appropriate steps out of this impasse, they will know where to find us."

Chizhov believes that international factors, particularly the election of Donald Trump in the United States, will be almost certain to push the EU countries to gradually change their policy toward Russia.

"Trump's victory in elections in the US has undoubtedly had the greatest impact on relations between Europe and the United States," the official noted. "From my observations such an outcome was not expected here in the European Union." On the contrary, EU officials "were clearly fixated, like many in the US, and even in our country, on a Clinton victory."

© Photo : PIxabay
Year in Review: Anti-Globalism, Protectionism Picking Up Steam in Western Democracies
Accordingly, when Trump won, European officials were obviously thrown into confusion about what to do next. The official recalled that for a long time, the US has been at the forefront of continuing efforts to pressure Russia via sanctions. "Vice President Biden has spoken openly about the need to 'twist the Europeans' arms'."

Therefore, Chizhov added, "if the new administration goes in the opposite direction – that is, toward the easing and lifting of sanctions, I think that the EU's sanctions policy too will not last long and, accordingly, will be subject to a review."

In fact, the diplomat stressed, many in Europe are already prepared for such a revision, "and some have even made some steps toward accelerating it."

The United States, Canada, the European Union and several other countries introduced sanctions against Russia in 2014 over the crisis in Ukraine, accusing Russia of interfering. Moscow denied the accusations, and stressed that Washington and Brussels were the ones who instigated the Ukrainian calamity by supporting a coup d'état in that country in February 2014. Since then, relations between Russia and the West have been plagued by mutual mistrust. Russia introduced agricultural countersanctions in the summer of 2014, leading to tens of billions of euros' worth of losses for European food producers.

Touching on the subject of Nord Stream 2, a planned gas pipeline project stretching from Russia to Germany via the Baltic Sea, Chizhov explained that the initiative has good prospects, since it has a strong economic rationale as its basis.

Chizhov recalled that "by and large, it was not Russia as a state or even Gazprom which took the initiative on this project, but rather the company's partners among a number of European energy companies, who saw it as a good business opportunity." Furthermore, he added, the construction of the pipeline would help ensure the continent's energy security, which thus gives it a political dimension.

© Sputnik / Grigoriy Sisoev
Russian Gas Costs EU Consumers 33% Less Via Nord Stream Than Ukraine
In that sense, arguments against the Nordstream II project, including those which come from Brussels, don't hold up to even a basic critical analysis, in the diplomat's view. In fact, Chizhov suggested that the biggest concern for many officials in Eastern Europe and Brussels isn't really Russia, but the concentration of power in Germany's hands as a transit power.

Accordingly, the EU's insistence that Ukraine's status as a transit nation be preserved is paradoxical and absurd, according to the official, because it essentially assumes that Germany would be a less reliable transit country than contemporary Ukraine.

Clogs in the Machine: EU Leaders Scramble to Save Ukraine Treaty