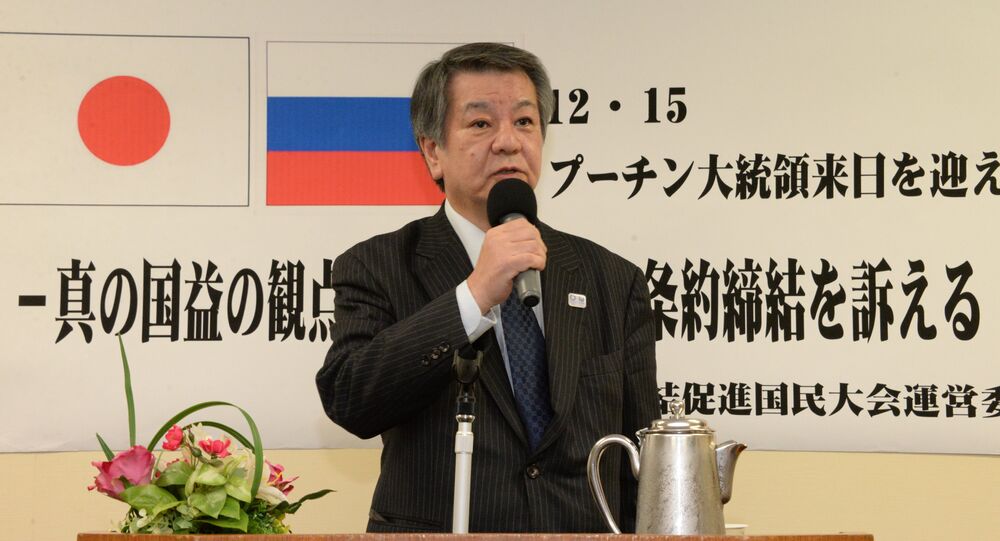 Japanese political activist and the head of the patriotic organization “Issui-Kai” Mitsuhiro Kimura greeted the visit of Russian President Vladimir Putin to Japan and stressed the necessity to continue the talks on the peace treaty which he puts prior to territorial dispute over the Kuril Islands.

In his interview to Sputnik Japan Kimura said he favored Prime Minister Shinzo Abe’s idea to invite Russian President Vladimir Putin to his home town of Nagato in Yamaguchi Prefecture.

“I also attach great importance to the decision to continue the talks in Tokyo despite the complaints from Washington. Japan should pursue self-sustained foreign policy independent from the USA,” Kimura said.

The activist expressed his regret that due to a busy schedule President Putin could not stay in Japan longer to hold a meeting with common citizens.

“I think that if a meeting with the leaders of Japanese community who also contribute to the development of Japanese-Russian relations were organized in Russian embassy in Japan, for example, it would play a positive role for establishing the image of Russia as an ‘open’ country,” Kimura assumed.

He also suggested that Putin should visit the Meiji Shrine in Tokyo as a symbolic step to celebrate reconciliation between the two countries, since Meiji period was when the Russo-Japanese war of 1904-05 began.

Kimura welcomes the development of economic cooperation with Russia and is enthusiastic about joint economic activities on the Kuril Islands such as special economic zones which could considerably ease the entry to the market for Japanese companies.

“I believe, it is better to conduct negotiations not on the sovereignty over the islands, but on a special regulation status for these territories,” Kimura said.

At a demonstration in Tokyo on December 11 anticipating Putin’s arrival Kimura held a poster which read “Who claims four islands, won’t get even two.” During the interview with Sputnik he stressed that in his opinion Japan should push for signing the peace treaty now and continue the talks on the disputed territories after that.

The activist expressed his concern over the excessive coverage of the leaders’ meeting in Japanese media which heats boostsup high expectations of the public.

“I am afraid that when there will be no break-through and the outcome of the talks will fall short of these expectations, it will give raise to the feeling of distrust towards Russia and disappointment with Abe’s policy,” Kimura said.

He added that many Japanese outlets reported about Putin’s late arrival as about some cunning tactical stroke.

“It’s nonsense! Such things just do not matter. What they should think about is the talks themselves,” Kimura added.