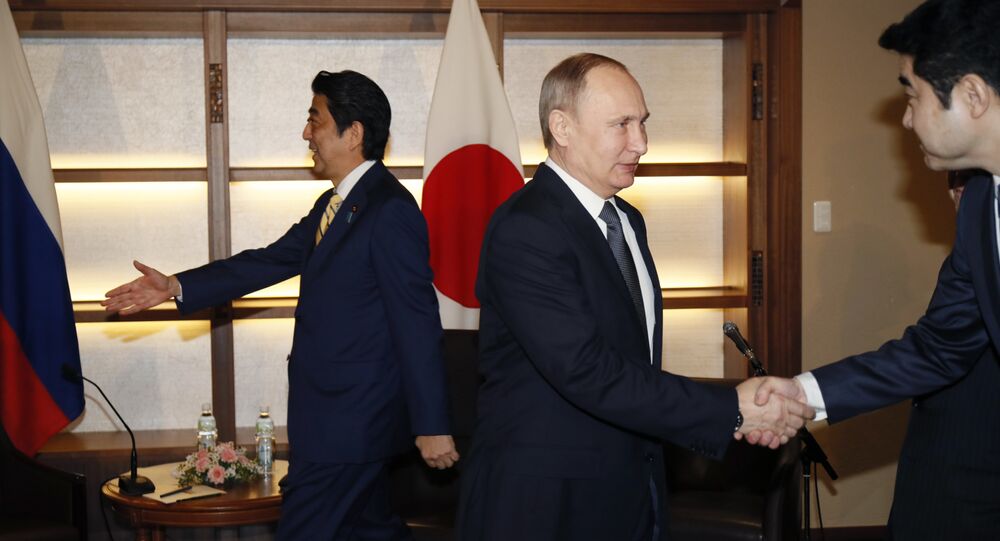 The agenda of the first day of Russian President Vladimir Putin's visit to Japan was dominated by the issues of bilateral trade and economy.

MOSCOW (Sputnik) — Earlier in the day, Putin arrived in Japan with a working visit, which is widely seen as a breakthrough in the Russian-Japanese relations, taking into account that it had been postponed since 2014.

Russian President Vladimir Putin and Japanese Prime Minister Shinzo Abe have discussed the prospects of the joint economic activities on South Kuril Islands, among other issues, during their three-hour talks, Abe said.

"[We have] thoroughly and frankly discussed the issues of free visit of their homeland by former residents of the islands, joint economic activities between the two countries with a special regime on the islands, as well as the issue of a peace treaty," Abe told journalists.

© Sputnik / Sergey Guneev
Samovar vs 'Putyatin's Arrival': Putin and Abe Exchange Gifts in Japan
Kremlin aide Yury Ushakov said that experts have failed to work out the text of a statement on joint economic activity on the islands.

"In Lima, the president and the prime minister instructed the experts to prepare a possible statement for today's meeting. Experts worked on the text for a few weeks, but were unable to develop a text that would be suitable to both parties. Therefore the leaders had to address it. They spent 40 minutes to agree on the text, which will be published tomorrow," Ushakov told reporters.

He said the joint economic activity of Russia and Japan on the Kuril Islands may concern fisheries, tourism, culture and medicine.

"We signed a memorandum on creating a joint investment platform. … Such funds help to set a better stage for investment," Trutnev, who is also the presidential envoy to the Far Eastern Federal District, told journalists.

The platform is intended to boost cooperation, because Japanese business is hesitant to invest in the Far East region of Russia and the country in general. Currently, the Russian side is actively figuring out new ways of attracting businesses, Trutnev added.

US Missile Defense in Pacific

© REUTERS / Toru Hanai
Putin, Abe Agree to Restore Frozen Military Contacts Between Russia and Japan - Lavrov
Russian Foreign Minister Sergey Lavrov said that Russian and Japanese leaders discussed the issues of the US presence in the Pacific region, US missile defense, as well as the threat of North Korea.

"[They] spoke of the general issues in the Pacific region, [they] discussed the issue of missile defense and in general foreign, specially US, presence, which in our opinion does not correspond to the threats emanating from North Korea," Lavrov said, as broadcast by the Life television channel.

According to the minister, Russia’s Japanese colleagues now seem to have better understanding of Russia’s concerns.

Russia Preparing Many Economic Deals Ahead of Putin's Japan Visit