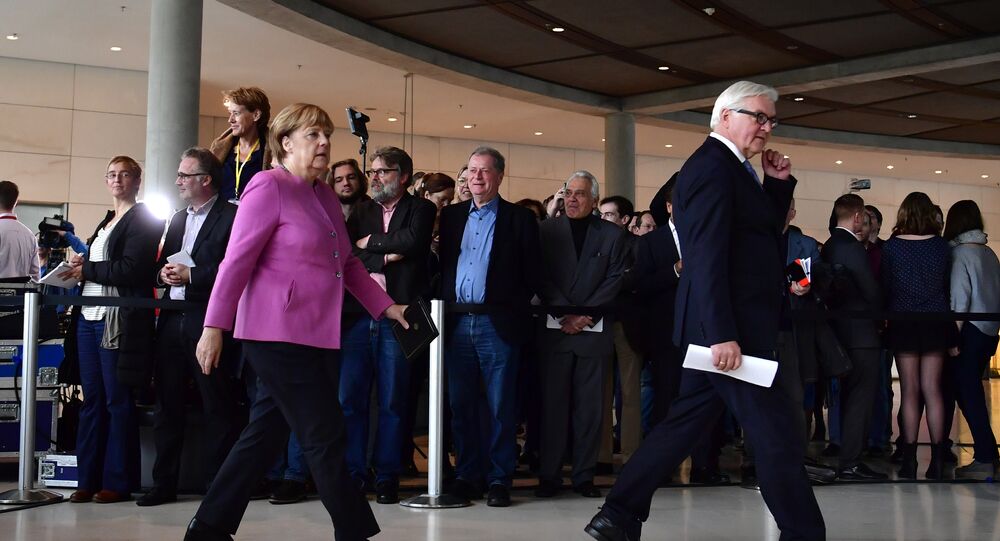 'No Cap, No Government': CSU Tells Merkel to Implement Migrant Threshold or Else

Leader of Germany's Christian Social Union (CSU) party has said they will refuse to be part of the Germany government unless Chancellor Angela Merkel puts a cap on the number of migrants entering the country.

The Bavarian party's head Horst Seehofer told news agency DPA that a threshold on the number of migrants entering the country is a prerequisite as to whether they will be part of the new government next year.

"Without an annual threshold of 200,000 migrants allowed to enter Germany, the Christian Social Union will refuse to be part of the next government," the Bavarian party's head Mr. Seehofer said in a recent interview.

© AP Photo / Matthias Schrader
CSU Leader Seehofer Warns Merkel to Limit Immigration or Risk Election Upset
He confirmed that without the named cap, the CSU would run as an opposition party.

In the first nine months of 2015 more than 710,000 migrants entered Europe across the Mediterranean and the Aegean. Countries in Europe's south and east struggled to cope with the flow of migrants, and on September 4 the governments of Germany and Austria opened their borders to thousands of migrants, who had been waiting in Hungary following Budapest's decision to halt trains traveling to Western Europe.

The warning from Mr. Seehofer is not the first one — he issued a similar threat in November to Merkel about the influx of refugees, saying that a limit must be set as to how many refugees are allowed into the country.

"The most difficult question here is the upper limit for the admission of refugees. We will insist on a maximum 200,000 per year, because limitation is a prerequisite for successful integration," Mr. Seehofer told the Ausgberger Allgemeine newspaper.

​The CSU leader was confident that the cap would be given and he would be able to overcome any resistance expressed by the Chancellor.

"We want to assure the people that we will be part of a government that keeps its word," Mr. Seehofer said in a recent interview.

The CSU chief has argued that a cap is necessary to allow Germany to continue taking in people most in need. He also said that he explicitly supports such a policy.

Mrs. Merkel however told German media that there will be no cap imposed on migrants.

​"I don't consider this tool to be the right one," Merkel told members of her Christian Democratic Union (CDU) from Nordrhein-Westfalen, Niedersachsen and Bremen at a conference in Munster that focused heavily on migration policy.

Imposing a limit on the number of migrants entering Germany is the only way forward in dealing with the refugee crisis for Mr. Seehofer, however for Angela Merkel it's apparently not an option at this time.