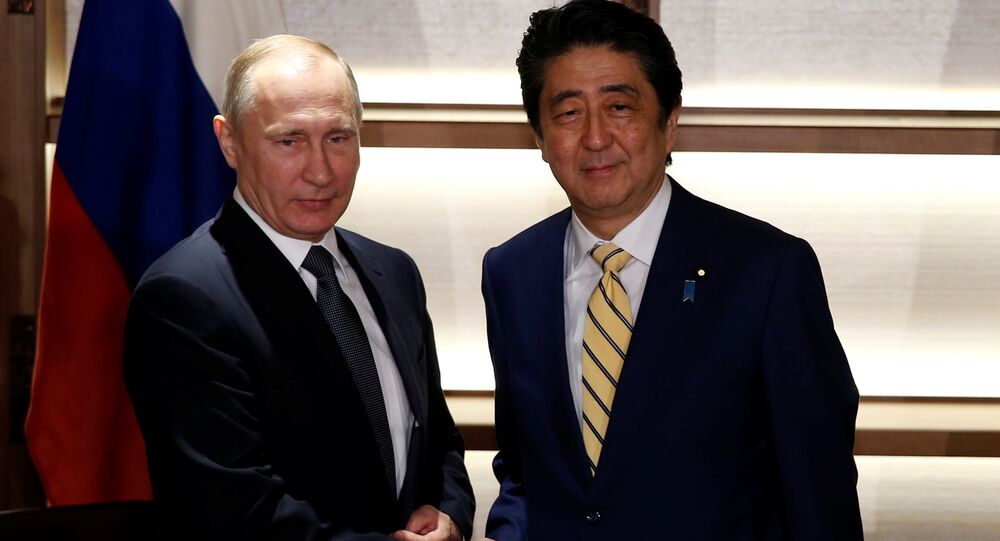 "Today, it has been agreed that it is necessary to restore other mechanisms of our bilateral dialogue, which had been frozen in recent years. I mean military contacts and 2+2 format talks," the Russian foreign minister said, commenting talks between Putin and Abe.

"Despite special relations between Japan and the US based on their military-political alliance since 1960 year, Russia and Japan are interested to closely cooperate in formats which exist in the Asia-Pacific region to solve security issues."

According to Lavrov, Putin and Abe discussed the issues of air defense and US presence in the Asia Pacific region, as well as North Korea's threats.

He said that US' boosting of military presence in the Asia-Pacific region is "disproportional" to the threat posed by Pyongyang's nuclear program.

The US uses the alleged North Korea's threat "as a pretext to boost modern arms here [in the Asia Pacific region]", Lavrov said.

The Russian foreign minister also said that Japanese authorities "have begun to better understand" Russia's concerns and both countries are interested in cooperation in the Asia-Pacific region.

"The Russian president spoke in details about the US air defense systems and their [US authorities'] aspiration to create one more missile deployment area here in north-east Asia, which we consider to be a part of the US global offensive combat system in addition to the air defense system in Europe, the Mediterranean Sea and now in Alaska," Lavrov said.

© Sputnik / Alexei Druzhinin
'Compromise' Needed to Resolve Kuril Islands Issue as Both Putin, Abe Want to End the Spat
Lavrov also said that Putin and Abe exchanged opinions on the Syrian conflict settlement and the situation in Ukraine, adding that Russia's and Japan's stances "almost coincide."

He also said that Putin and Abe discussed the preparation for negotiations on the peace treaty in a one-to-one format.

Japan and Russia never signed a permanent peace treaty after World War II due to a disagreement over four islands, which Russia calls the Southern Kurils and Japan the Northern Territories, encompassing Iturup, Kunashir, Shikotan and Habomai.

Putin Thanks Abe for Efforts Aimed at Strengthening Russia-Japan Ties

Putin’s Meeting With Abe Could Be Rescheduled