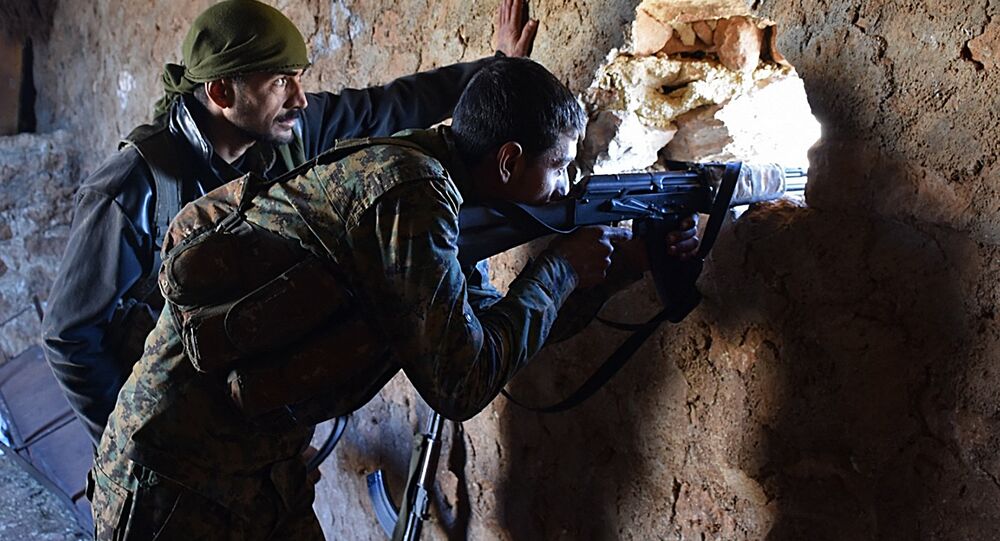 HAMBURG (Sputnik) — Over the past three weeks, the Syrian troops and allied militia detachments have liberated over 80 percent of the territory of Eastern Aleppo, which was captured during a terrorist invasion in 2012.

© REUTERS / Omar Sanadiki
Fuel to the Fire: Obama's Decision to Arm Allies in Syria 'Aimed at Prolonging the War'

"They [the hostilities] will continue until the gunmen leave Eastern Aleppo. It is clear to everyone now, it is clear to our US partners," Lavrov told reporters after a meeting of the Ministerial Council of the Organization for Security and Cooperation in Europe (OSCE).

He said militants in Eastern Aleppo are "agonizing," adding that Russia "would not like to support those who would prefer to finish off these militants at any cost without any talks, we are ready to solve problems so as to prevent additional casualties and destruction."

Lavrov said that Russia is working with all regional countries influencing the situation in Syria's Aleppo, adding that this could be more productive than cooperation on the issue with the United States.

"The Americans cannot influence the groups that settled in Eastern Aleppo, we know for sure that the groups are influenced by some countries in the region, and we are working with all these countries too, we are working with the Turks, we start reaching some common understandings. Maybe this channel of cooperation will be more productive than the one with the Americans."

Hostilities in Aleppo Not Ceased Completely

© REUTERS / Abdalrhman Ismail
Total of 10,724 People Leave Aleppo Over Past Day - Russian Defense Ministry
Fighting in Syrian Aleppo has not stopped completely, it has been suspended for a certain period of time, Russian Foreign Minister Sergey Lavrov said Friday.

"I have not said that the fighting has been stopped, completely ceased. I said that they it has been suspended yesterday for a certain period in order to help the civilian population to leave, the people who wanted to do so," Lavrov told reporters, following the meeting with his German counterpart Frank-Walter Steinmeier.

On Thursday, Lavrov said that the Syrian government forces suspended combat actions in Aleppo in order to let civilians leave its besieged parts.

"We have agreed that our experts would meet tomorrow [Saturday] in Geneva. If the US experts would not change their minds again, as they did a few days ago… then there is a very good opportunity to agree on how to finalize the settlement of the situation in eastern Aleppo by withdrawing all the militants from there. But I cannot guarantee that there will be no surprises all over again, because too many unknowns."

Russia, US in Talks on Aleppo Humanitarian Pause, Fight Against Terror