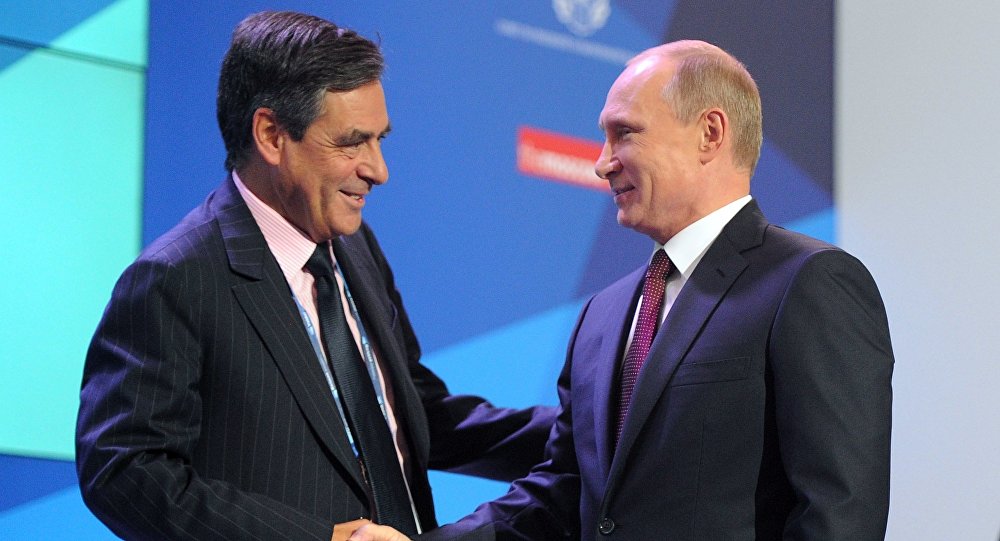 Corporate media in the West has tried to "play the Putin card" during the election season, Senator Alexei Pushkov told Sputnik, citing the recent presidential election in the United States and the presidential primaries in France as a case in point.

"I think that the Western media want to play the Putin card. Hillary Clinton had tried to use this approach in a negative way, while Trump mentioned Putin as a future partner and Russia as a country which the US will have to build new relations with. I don't think that it is bad publicity for [former French prime minister] Francois Fillon, although I think that he won the primaries largely due to internal reasons," the senator said.

Pushkov added that the Western media have caused a stir by mentioning Vladimir Putin in connection with Fillon's victory in the French presidential primary, but in reality Russia did not figure prominently during France's primary season.

© AFP 2019 / OLIVIER MORIN
Hollande Stays Off 2017 Menu as French President 'Preserves Dignity'
Russia was a hot topic during the election season across the Atlantic. Former US Secretary of State Clinton, who lost to Donald Trump, repeatedly blamed Russia and its leadership for ostensibly meddling in America's internal affairs. Russian officials have denied these baseless accusations. For his part, US President-elect Trump indicated that he wanted to have good relations with Moscow and was open to the idea of tackling international terrorism through joint initiatives.

Trump's stance goes against the message that the corporate media in the West was spreading. Fillon, the leading conservative candidate at the upcoming presidential election, has taken a similar approach to Russia. He has urged to lift restrictive measures imposed on Moscow and appears to be willing to work together with the Kremlin on dealing with global challenges and crises, including immigration and terrorism.

"Fillon decided not to keep his stance on Russia a secret and go against the main trend in the French media. This has taken courage, but it worked in Fillon's favor because, I think, voters in France, Italy, Austria, Hungary and the United States are interested in the overhaul of relations with Russia. Everyone is tired of anti-Russian sentiments," the senator said.

Pushkov further said that in his opinion the majority of Europeans are in favor of improving relations with Russia regardless of what some media outlets and certain political elites do.

© REUTERS / Regis Duvignau
A Right-Wing Kind of Socialist: Manuel Valls Throws His Hat in the Ring
Relations between Moscow and Paris will most likely remain unchanged for up to six months following the presidential election in France, he added.

"However, this inertia will disappear thanks to new political forces which have moved to the forefront in the United States, France and some other member of the European Union. Everyone I talked to say that we are on the verge of a new era. I hope that the resolution of the Syrian crisis and a joint fight against Daesh, involving Russia and Europe, will become the first achievement of this new era."