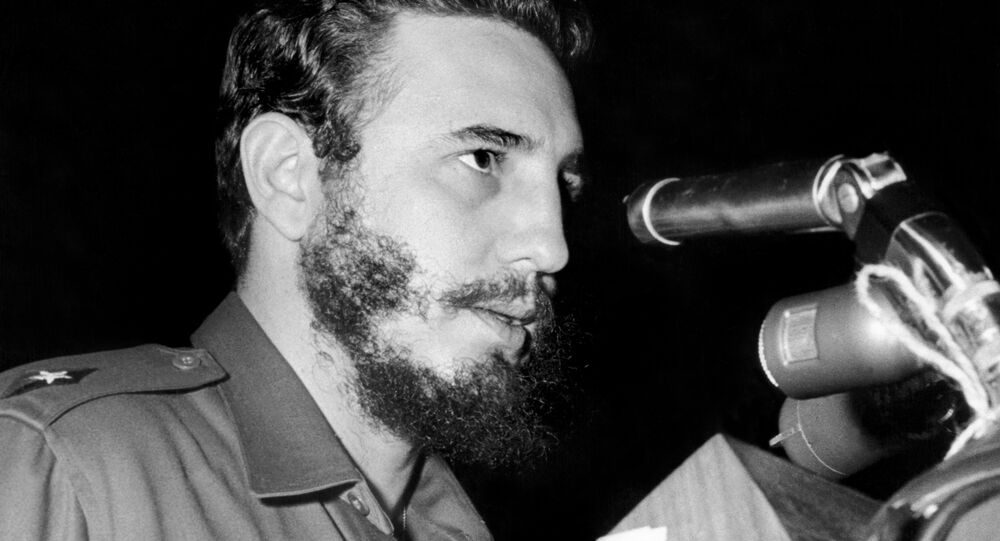 While Cubans are saying their final goodbyes to Fidel Castro, academics and journalists who met the iconic Cuban leader shared their memories with Sputnik, describing Castro as a statesman who turned a small island country into a geopolitical actor.

On December 3, the Cubans are saying their last goodbyes to their legendary revolutionary leader Fidel Castro, as the cortege with his ashes is reaching its final destination — Santiago de Cuba, where a massive rally is due to be held in his honor.

"Fidel Castro did a very important thing: he made Cuba what it is. He turned a small island state which no one spoke about, into an important factor of world politics. He made Cuba the state whose opinion cannot be ignored by world powers today," Professor Lazar Kheifets of St. Petersburg State University, Russia, told Radio Sputnik.

The Russian academic admitted that Fidel Castro played an important role in his own life: "It was Fidel Castro, in fact, who brought me into the profession, instilled a love of Latin America into me."

"Raul Castro, Vyacheslav Volodin, the Prime Minister of Greece (Alexis) Tsipras, they all said that Fidel Castro has passed away undefeated. And I totally agree with them," Kheifets underscored.

© Sputnik / Sergey Guneev
Fidel's Legacy: 'Cubans Give Us Example of How to Develop and Live'
On Tuesday evening the commemoration ceremony for the deceased Cuban leader brought together nearly one million people in the country's capital city of Havana.

Fidel Castro's death has been perceived as a personal loss by Hadzi Dragan Antic, Serbian journalist and former director and editor-in-chief of "Politika" newspaper.

Back in the early 2000s following the collapse of Yugoslavia and Slobodan Milosevic resignation Hadzi Antic was forced to flee Serbia and it was Fidel Castro who offered him shelter in Cuba.

"A whole lot of filthy lies were said about Castro. And he was a statesman who escaped about 600 assassination attempts since he came to power," the journalist told Sputnik Serbian.

"Being a lawyer from a rich family, [Fidel Castro] began his fight for human rights, which are so much discussed today. His father possessed 23 thousand acres of land, which he donated to the state," Antic stressed.

Describing his meeting with Fidel Castro the journalist noted: "It was an incredible feeling!"

"After all, he helped me to escape political persecution I was subjected to after October  5 and flee to Cuba. I had never imagined before that I would live and work in Cuba, and that I would personally know Fidel Castro," the journalist emphasized.

"I do not know how to describe how grateful I am to him," Antic added.

Brazilian theologian and Dominican brother Frei Betto also shared his memories of the Cuban leader, whom he considered his best friend.

"Fidel Castro was David who defeated Goliath," Frei Betto told Sputnik, "According to the Cubans, 634 attempts had been made to kill him. And he died in his bed last month. He managed to bring Cuba to a top position among other Latin American states in terms of living standards."

© REUTERS / Oswaldo Rivas
Fidel Castro's Legacy and the Hypocrisy of His Detractors
"There are no illiterates in Cuba. It is the most developed country in the region in the fields of education and health. And this data did not come from Cuba, it is cited by international organizations such as UN agencies, as well as WHO and UNESCO," the Brazilian priest emphasized,

Frei Betto noted that Cuba's independence and sovereignty is Castro's legacy; over decades the US has been unable to coerce the Cubans into submission.

"[What Castro left to the Cubans] is also a moral heritage. Fidel used to say that the revolutionary can lose everything — even his life, but not his conscience," the Brazilian theologian recalled.

Speaking to Radio Sputnik, Lazar Kheifets emphasized that he believes that Havana will continue to pursue the policy course set by Fidel Castro.

"Some consider him a dictator, but those who fiercely criticize Castro, referring to the shortcomings of his rule, do neglect huge benefits brought by the Cuban revolution to the country," Kheifets highlighted.

"A new generation of Cuban leaders will come, but it will be people 'raised' by Fidel Castro and the Cuban Revolution," the Russian academic underscored.

The legendary Cuban Comandante passed away on November 25 at the age of 90. The funeral ceremony is due to take place in the city of Santiago de Cuba on December 4.

From the Streets of Havana: Fidel Castro Ally Remembers Leader

From the Streets of Havana: "Fidel is Gone But the Revolution Lives"