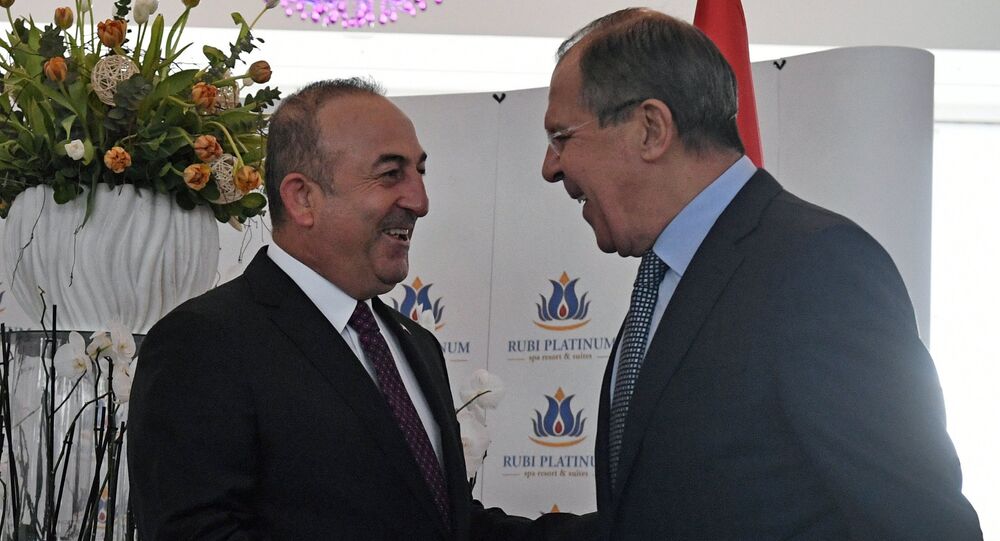 The Russian foreign minister hold a meeting with his Turkish counterpart to discuss the Syrian conflict and bilateral relations.

"I hope that close cooperation between Russia and Turkey on Syria will help make a significant contribution to the implementation of the decisions made by the international community," Lavrov said after talks with Cavusoglu.

The Turkish minister echoed Lavrov's statement that the Turkish-Russian cooperation would bring positive results that would contribute to the settlement of the Syrian crisis.

Lavrov pointed out that the political process in Syria was making no headway at the moment.

"At a time when our colleagues from the United Nations, who were tasked with conducting inclusive intra-Syrian talks, cannot do this for some reasons, we cannot wait forever. Syria’s future must be determined by Syrian people. Russia and Turkey by all means contribute to the process of creating necessary conditions for an inclusive dialogue," Lavrov said.

He noted that Russia had never evaded contacts with all opposition groups in Syria.

"We never evaded either contacts with any political opposition groups or contacts with field commanders. As our Turkish colleagues also have contacts with both, including field commanders, we exchange information on what climate prevails in that environment, spur them to become part of a common solution as part of what was discussed within the International Syria Support Group and at the UN Security Council," the Russian foreign minister said.

Lavrov added that during a meeting in Lausanne a month ago, Russia advocated establishing dialogue with the armed Syrian opposition.

He also expressed hope that the United Nations and other international organizations would follow the Russian example and start the deliveries of humanitarian aid to the residents of east Aleppo.

© AFP 2021 / GEORGE OURFALIAN
Syria's HNC Refutes Reports of Turkey-Mediated Talks With Russia on Aleppo
"Meanwhile, our military and the Emergencies Ministry are sending humanitarian aid and mobile hospitals. These hospitals with physicians, necessary drugs and equipment are being deployed in the east of Aleppo. So instead of whining about the fact that the residents of eastern Aleppo cannot get help we are engaged in concrete actions. We hope that international organizations, including the United Nations, will follow our example," Lavrov said.

He added that there were no obstacles for the delivery of humanitarian aid to eastern Aleppo via the Castello road and pointed out that terrorists tried to prevent civilians from fleeing militant-controlled parts of Aleppo.

Lavrov also assured his counterpart that neither Russian nor Syrian air forces were involved in the incident with the Turkish Armed Forces that took place on November 24 and left three Turkish soldiers killed.

Cavusoglu pointed out that Turkey supported the territorial integrity of Syria.

"We are for territorial integrity of Syria. That is why, speaking about integrity, we of course should be inclusive and our position continues to be inclusive, which means all sides and all views will be listened to and taken into account," the Turkish minister said.

He pointed out that Turkey held Syrian President Bashar Assad responsible for mass violations of human rights in Syria but continued its policy on Syria, coinciding with the position of Russia that supports the Syrian leader.

"Our country openly says that Assad bears responsibility for murder of a large number of people in Syria, innocent citizens of this country. But we will continue the policy which is in harmony and coincides with Russia’s position on searching for a political solution to the conflict and delivering regular humanitarian aid to Syria’s people," Cavusoglu said.

He also noted that Turkey was ready to continue cooperation with Russia aimed at fighting terrorism.

"We have to work and we carry out general work in the fight against international terrorism, it is one of the most important spheres of our activity. The PKK, Daesh and other terrorist organizations pose a threat not only for our region but for the whole world. In this context, we will continue to cooperate," the Turkish minister said.

The ministers discussed preparations for the upcoming High-Level Russian-Turkish Cooperation Council that will be attended by the leaders of both countries early next year.

© Sputnik / Nina Zotina
Russia, Turkey Efforts Contribute to Implementation of Int’l Decisions on Syria
"Of course, we talked in detail about our bilateral relations. We reiterated mutual interest in their progressive normalization in accordance with the agreements of Russia's and Turkey's presidents. We also reviewed the preparations for the upcoming High-Level Russian-Turkish Cooperation Council meeting co-chaired by President Vladimir Putin and President Recep Tayyip Erdogan," Lavrov said.

"Next week highly esteemed Turkish Prime Minister Yildirim will visit Russia, they will discuss many important issues. The meeting between our prime minister and Russia's leader Vladimir Putin is also being planned," the Turkish minister said.

He also said that Ankara considered the Akkuyu Nuclear Power Plant project implemented in cooperation with the Russian Nuclear State Corporation Rosatom to be strategically important for the country.

"Regarding the Akkuyu NPP construction, it is a very important strategic project of Russia and Turkey and we will do everything possible to ensure it is successfully implemented," Cavusoglu added.

On November 24, 2015, Turkey downed a Russian Su-24 plane, with two pilots on board, which was on an anti-terror mission over Syria. Following the incident, relations between Russia and Turkey deteriorated, with Moscow demanding that Ankara apologize for downing the plane and cover any associated material losses to the country and the pilot's family.

Moscow imposed a number of restrictive measures on Turkey in response to what Putin then described as a "stab in the back." Russia's retaliatory measures against Ankara included a ban on charter flights to Turkey, as well as ban on certain food imports since January 1, 2016.

The two countries ended seven months of tension in late June when Erdogan wrote a letter to Putin in which he apologized for the downing of the jet and extended his condolences to the family of the pilot killed in the incident.