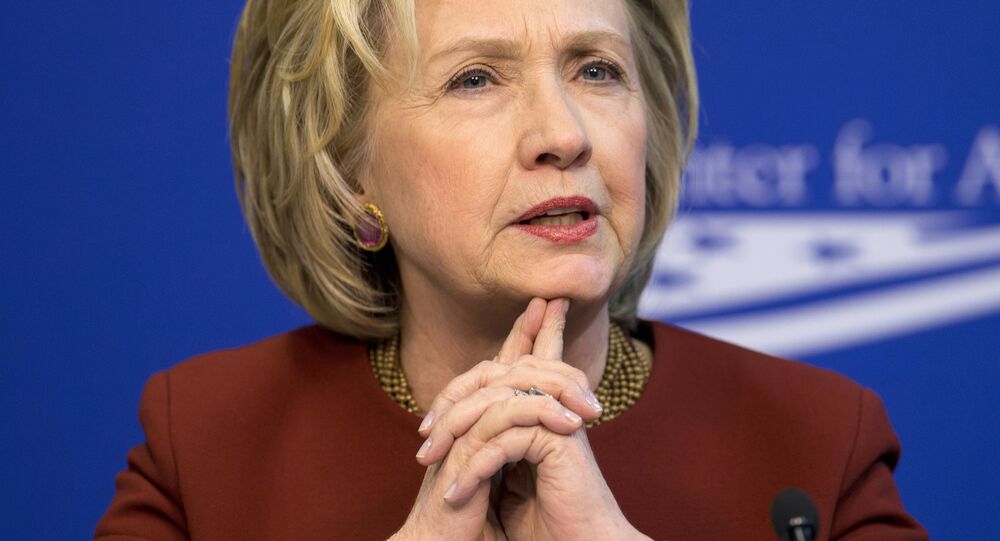 The donation scandal around the Clinton Foundation is attracting more and more attention. Recently, it turned out that not only GIZ donated 2.4 million euro of taxpayers' money to the American institution, but that the Federal Ministry of the Environment is also involved in the scandal and donated 4.5 million euro to the foundation.

In an interview with Sputnik Germany, Bundestag MP and member of the Left party Niema Movassat wondered why the information about such controversial financial practices of German state institutions came out so late.

For a long time, established media and politicians had been keeping silent about this issue and the politician believes that there could be certain reasons behind this.

"I wonder why it didn't come up earlier. Journalist Tilo Jung reported about it in his blog in May 2016 and there was no reaction at that time. And now it all came out after the election. Many questions arise given the profile of the Clinton Foundation. You can get the impression that one or another journalist did not want to talk about it too loudly during the election campaign because there was already a great sympathy for Clinton," Movassat told Sputnik Germany.

© REUTERS / Brian Snyder
No More Pay to Play? Australia Halts All Clinton Foundation Funds
Earlier, it was reported the German Society for International Cooperation (GIZ) appeared on the list of sponsors of the Clinton Foundation on the official website of the latter and is assumed to have donated from one to five million US dollars to the American institution.

The GIZ confirmed on its website that it has donated a total of 2.4 million euro to the Clinton Foundation from 2013 to 2016. The money was supposed to finance a development project that was commissioned to the Foundation by Germany's Ministry for Economic Cooperation and Development. Whether they have been spent for the project, however, remains questionable.

Now it turned out that the German Ministry of the Environment also donated 4.5 million euros to the foundation.

"It is a great surprise that they had given money in the high phase of the election campaign — that's not ten years ago, but now. For everyone who has some political understanding it should be clear that in such a phase you can't give money to a foundation of that kind," the politician told Sputnik Germany.

© AP Photo / Charlie Neibergall
Striking Revelation: How Germany Financed Clinton Foundation With Taxpayers' Money
Meanwhile, both institutions are struggling to explain their decisions. In particular, they say that the funds had been transferred to the Clinton Foundation for concrete projects and in no way were supposed to finance the election campaign of the presidential candidate.

The Federal Ministry of Environment replied to a request of journalist Tilo Jung in a following manner:

"Dear Mr. Jung, you recently have sent a request to the BPK about the Clinton Foundation. To this end, I can tell you the following: Within the framework of the International Climate Protection Initiative (IKI), the Federal Ministry for the Environment promotes two projects with the participation of the Clinton Foundation. These are initiatives in the IKI funding area ‘Conservation, Reconstruction and Sustainable Use of Natural Carbon Sinks.'"

"The first project "Support for forestry and landscape restoration in East Africa" is supported by us with around 1.5 million euros and carried out directly by the Clinton Foundation in Kenya and Ethiopia."

"Together with the International Union for the Conservation of Nature and Natural Resources (IUCN), the Clinton Foundation is implementing the second IKI project "Rehabilitation of forest ecosystems at a landscape level as a cost-effective bridge for the integrated implementation of national land-based mitigation and adaptation strategies". We have funded this project with around EUR 3 million."

© AP Photo / Carolyn Kaster
'Lock Her Up': Untold Story of Hillary Clinton's Disgrace in Haiti
Movassat finds the explanation insufficient given the fact that the financing had been going on in the third quarter of 2016, when Clinton's election campaign was in full swing.

The politician had also sent a request to GIZ, asking the institution to comment on its donations. In response he received a letter, a part of which said that "GIZ did not provided funds or donations to the Clinton Foundation to finance the US campaign of Hillary Clinton" and that the foundation "has an obligation to account for the correct use of funds to the GIZ," which for its turn "is accountable" to Federal Ministry for Economic Cooperation.

According to the politician, the letter is very similar to the statement published on the website of the German Society for International Cooperation earlier, and doesn't contain any detailed explanations on the issue.

"I think they should really explain how it could come to such financing activities. By whom and when the application had been sent, who lobbied whom. We need to carefully examine all these aspects in order to eliminate any smell of corruption and any deals," the politician said. "I assume that there may be one or another case, which is still completely unknown," he concluded.