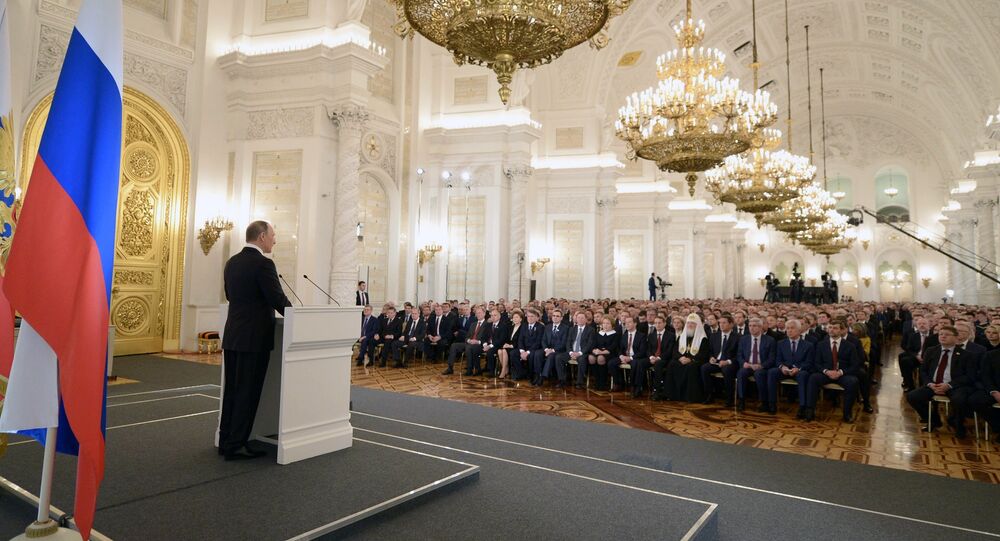 Putin's Annual State of the Nation Address in Memorable Quotes

President Vladimir Putin is scheduled to give his annual state of the nation address to the Russian MPs and honored guests on December 1, outlining his vision for the country's development and reflecting on the trends that have shaped the outgoing year. We offer you the most memorable quotes from the 2015 speech.

The president's annual address has become a tradition after Boris Yeltsin first delivered it in 1994. The event, taking place in St. George's Hall at the Kremlin, is broadcast live by major TV channels.

Last year the speech, delivered on December 3, was largely focused on international terrorism and Moscow's reasoning behind sending its military aircraft and warships to root out radical groups in Syria.

"Russia has long been at the forefront of the fight against terrorism. This is a fight for freedom, truth and justice, for the lives of people and the future of the entire civilization," he said.

© AFP 2021 / KIRILL KUDRYAVTSEV
Russian President Vladimir Putin (C back) delivers his annual state of the nation address at the Kremlin in Moscow on December 3, 2015

Russia has firsthand experience of the havoc terrorist groups and lone-wolf attackers are capable of wreaking. However, Moscow understands that no country is capable of defeating armed radical groups on its own. This is why President Putin once again urged the international community to take action against "modern-day dark forces" together, something the Russian leader has long advocated.

President Putin also made an indirect mention of those who are to blame for empowering "a destructive and barbarous ideology" in the Middle East and North Africa.

"We all know why that happened. We know who decided to oust the unwanted regimes and brutally impose their own rules. Where has this led them? They stirred up trouble, destroyed the countries' statehood, set people against each other and then 'washed their hands,' as we say in Russia, thus opening the way to radical activists, extremists and terrorists," he said.

International terrorism, particularly groups that are based in Syria, have posed a major threat to the world, including Russia. Seasoned fighters who came to the Middle East from Russia and other post-Soviet states have been of particular concern to the Russian leadership.

This is what prompted the Kremlin to accept a request from Damascus authorizing a military operation aimed at helping legitimate Syrian authorities contain and ultimately defeat organizations, including Daesh and al-Nusra Front.

"If they get sufficiently strong to win there, they will return to their home countries to sow fear and hatred, to blow up, kill and torture people. We must fight and eliminate them there, away from home," he said. "Our military personnel are fighting in Syria for Russia, for the security of Russian citizens."

Moscow's limited but highly efficient engagement in Syria has put to rest all the doubts regarding Russia's military capabilities following the end of the Cold War. The Russian Armed Forces have carried out sophisticated operations using cutting edge technological solutions, including brand new strategic and tactical aircraft, cruise missiles and vessels.

"The Russian Army and Navy have convincingly demonstrated their combat readiness and their increased capabilities. Modern Russian weapons have proved to be effective and the invaluable practice of using them in combat conditions is being analyzed and will be used to further improve our weapons and military equipment," President Putin said.

The 2015 state of the nation address took place less than ten days after the Turkish Air Force had shot down a Russian bomber over the Syrian territory, citing non-existent airspace violations. The incident provoked strong response from President Putin.

"We will never forget their collusion with terrorists," he said, referring to some senior Turkish officials. "We have always deemed betrayal the worst and most shameful thing to do, and that will never change. … If someone thinks they can commit a heinous war crime, kill our people and get away with it, suffering nothing but a ban on tomato imports, or a few restrictions in construction or other industries, they're delusional."

Relations between the two countries have improved in mid-2016 after Turkish President Recep Tayyip Erdogan formally apologized for the Su-24 tragedy.

President Putin also mentioned that some in Turkey were profiting from shady deals with Daesh, a brutal group which declared a caliphate in parts of Iraq and Syria under its control.

"We know who are stuffing pockets in Turkey and letting terrorists prosper from the sale of oil they stole in Syria. The terrorists are using these receipts to recruit mercenaries, buy weapons and plan inhuman terrorist attacks against Russian citizens and against people in France, Lebanon, Mali and other states," he said.

Ankara has since launched a military campaign in northern Syria aimed at pushing Daesh out of border towns.

The 2015 state of the nation address covered domestic developments as well as foreign policy, with President Putin commenting on the state of Russian economy among other things.

"The current situation is complicated but, as I have said before, not critical. In fact, we can already see some positive trends. Industrial production and the national currency are generally steady. There is a slight decline in inflation. We can see a significantly lower capital flight as compared to 2014," he detailed.

President Vladimir Putin concluded his 2015 state of the nation address by saying that "Russia declared a voce piena its status as a strong state with a millennium-long history and great traditions, as a nation consolidated by common values and common goals."

The Russian leader then said that the nation understood the complexity and scale of foreign and domestic challenges that it faces as an integral part of a global world.

"There are always difficulties and obstacles on the path to progress and development. We will respond to all challenges; we will be creative and productive; we will work for the common good and for the sake of Russia. We will move forward in unity and working together we will achieve success," he noted.