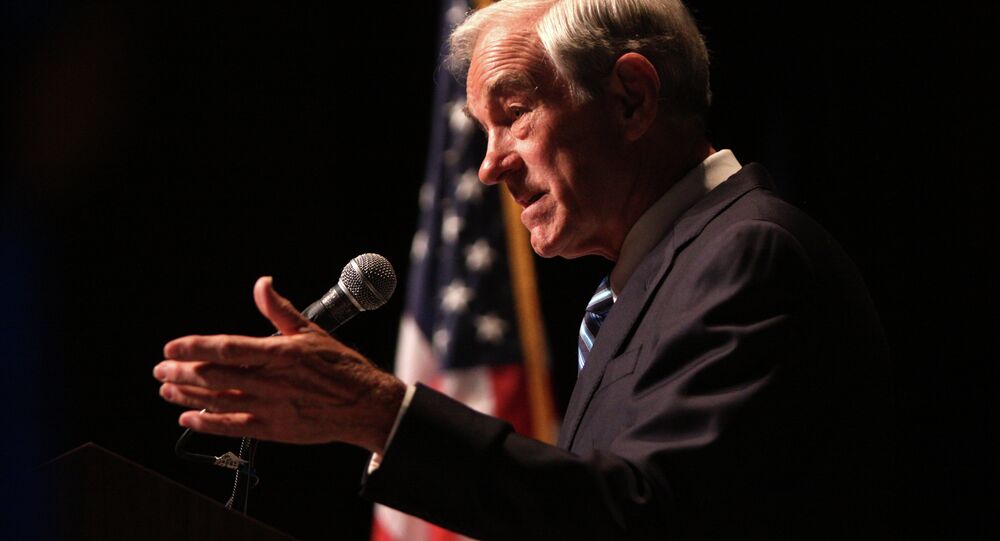 Radio Sputnik spoke in an exclusive interview with Dr. Ron Paul, former Republican Texas Congressman, who ran for President in 1988, 2008 and 2012. He discussed the US Department of Education, foreign policy and other prospects of US President-elect Donald Trump’s administration.

Talking about the US foreign policy of the US, Ron Paul told Sputnik that according to him the US should have “commerce, trade and friendship with all nations but entangling alliances with no one.”

He further said, “Even with the imperfect nations of the world we should always emphasize talking with people, working and trading with them. We can’t spread some ideology just because we think it is exceptional. Marching into the Middle East with guns and overthrowing governments. That is very dangerous and contributes to the bankruptcy which is coming.”

Talking about future policies of president-elect Donald Trump, the former congressman said that Trump has picked one of the most authoritarian neo-conservatives for his vice president, Mike Pence.

“Mike Pence is not a non-interventionist. If it could ever be anyone more diametrically opposed to my position on intervention, it could be Pence.”

Ron Paul also mentioned Bolton, Guilliani and Mitt Romney; who are all part of “that system” that’s why the appointment will be very important.

“I predict that the appointment to the Secretary of State will not be very close to the views of the constitution, or Thomas Jefferson approach, that is not likely to happen, even though you can’t argue that Trump has never said anything that would be different because he certainly has a different approach in the Ukraine and with Russia and I think that is very beneficial,” Ron Paul said.

However, he further said that Trump has made other statements too which makes it hard for Ron Paul to predict anything.

“You just really don’t know what he [Trump] is going to do and that is a big problem for me,” Ron Paul said.

Talking about the US economy and how the government instead of fixing it, is manipulating various aspects of it for special interests Ron Paul said that, “The government should not police the world and tell people how to run their personal habits.”

Ron Paul further said that many founders of the US back in the day, made a statement saying that “freedom doesn’t work if you don’t have a moral society.” He said that people must assume responsibility for each other and take it upon themselves to teach their children well.

© REUTERS / Carlo Allegri/File Photo
'Trumponomics' Unable to Deal With Core Problem of US Economy
“Right now we are facing the failure of a softer approach of government authoritarianism done in the name of humanitarianism and yet it is the rejection of liberties that is the real problem,” Ron Paul said.

The former congressman also spoke about how the US government’s efforts to replace Marxism and Fascism with this other system which is going to fail too, because, “It is this philosophy that states that the economic planning is best done by a few individuals in the capital in Washington, rather than by the individuals who raise their own kids and have family units.”

“Why can’t the family decide how much money they are going to make and how they will spend it and not expect the government to do all their biding for them,” Ron Paul said.

Talking about conducting the labor policies and investing into US infrastructure, Ron Paul said that it is not the responsibility of just the president but of the US Congress.

As was reported earlier, Donald Trump’s line on the economy is that it is set to boost growth in the US and subsequently, across the globe. That’s according to Monday’s statement by the Organization for Economic Co-operation and Development.

© AP Photo / Reed Saxon
Trump Considers Former CIA Chief Gen. Petraeus as US State Secretary
The OECD expects Trump’s pledges to come to fruition to invest into US infrastructure and conduct proactive labor policies to turn the US into the best performing large advanced economy in 2017.

US Department of Education

Talking about the US Department of Education and what it has achieved in the past few years, Ron Paul said, “From my viewpoint as a libertarian and a constitutionalist it has accomplished nothing, but enhanced power and authority of a centralized control of education, which is very detrimental to freedom of thought.”

He further said that he was in the Congress at the time when the department was being set up and he voted against it as it was quite intrusive in his view. According to Ron Paul education should be done locally, “as local as possible by parents, local communities, local churches and voluntary groups.”

According to the former congressman, the overall education system in the US over the past few years has been a “disaster” with drugs, violence, guns and disruptive classes’ all part of the system.

Trump Threatens to Terminate US Deal With Cuba