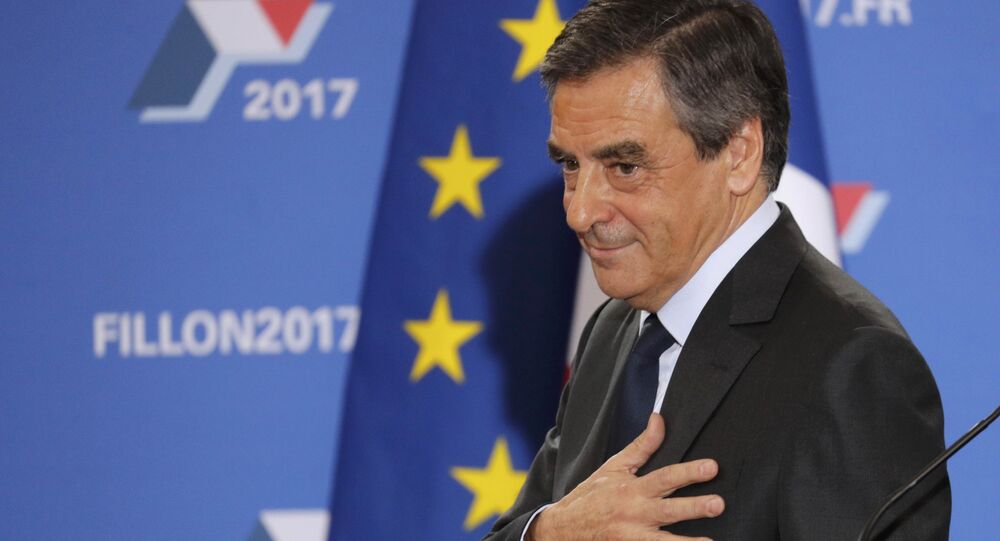 Francois Fillon’s victory in Sunday's runoff for a bid to lead the Republican Party in presidential election is a part of the trend that reflects the global change toward sovereigntism, which makes the nation's sovereignty its top priority in decision-making, an adviser on international politics of Italian Lega Nord party told Sputnik Monday.

© REUTERS / Philippe Wojazer
Victory for Fillon in Presidential Primary Marks Earthquake in French Politics
MOSCOW (Sputnik) — Fillon is leading in Sunday's runoff with 66.5 percent of center-right votes with the majority of votes counted, according to the preliminary results of the second round of the primaries. The exact results will be announced later on Monday.

"After Brexit vote and [Donald] Trump's victory in the United States, Fillon’s win is a proof that the wind is blowing in the direction of sovereigntism on the global scale. The French have just said 'no' to failed policies of left bureaucrats and bankers that are so distant from the people," Gianluca Savoini said.

Savoini noted that Fillon as well as National Front leader Marine Le Pen, who is expected to compete with the Republican candidate in a presidential runoff in May, were calling for a change in the country’s foreign policy, in particular, stressing the necessity to seek close dialogue with Russia.

"One of Fillon’s foreign policy priorities reflects an idea of rapprochement with Moscow, as well as Marine Le Pen’s, which seriously contradicts the current Paris policies," Savoini explained, adding that it is a change for the better.

During the primaries, Fillon has repeatedly stated that there was no threat from Russia, Moscow should be a partner in anti-terror fight in Syria, while the European sanctions against Russia should be lifted. The French prime minister from 2007 to 2012 under then-President Nicolas Sarkozy, Fillon is set to cut 500,000 public sector jobs in five years and abolish the 35-hour week. He is also known for his hardline approach to suspected Islamist radicals and advocates against same-sex marriage. Fillon's economically liberal ideas gain support of small and medium businesses.