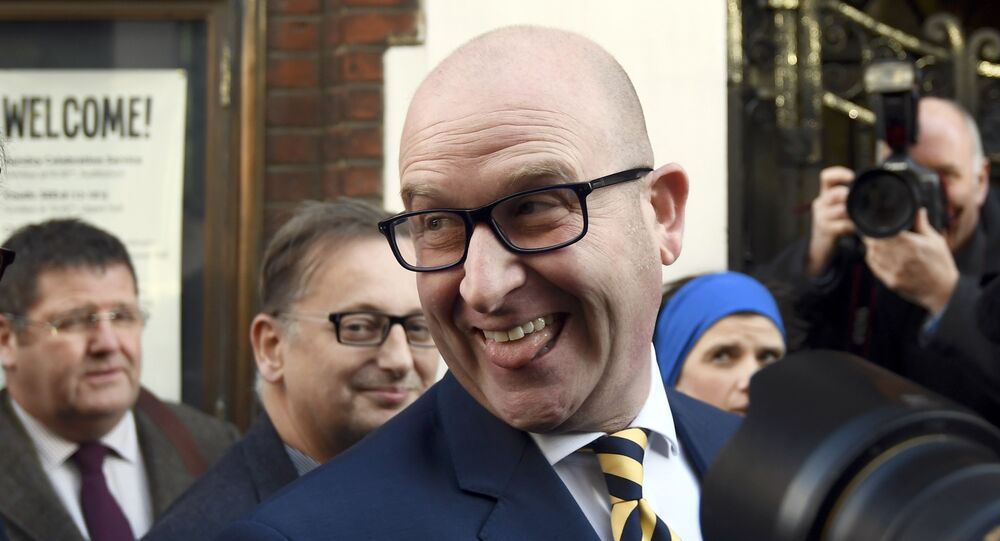 Not All Know Nuttall: New UKIP Leader to Put 'Great' Back Into Britain

Paul Nuttall has been elected the next leader of the UK Independence Party (UKIP), replacing current interim leader Nigel Farage. Nuttall won by an overwhelming majority and said he will set the party's sights on winning over disenchanted Labour voters, get UK our of the EU and curb immigration.

Promising to discuss the issues other parties do not wish to talk about such as forced marriage and female genital mutilation (FGM), Nuttall also addressed gender equality issues, showing that UKIP is a party attempting to reach a more diverse segment group and perhaps appeal to the Labour voting pool.

He is promising an end to the infighting and chaos that has blighted the party over recent months. The MEP and UKIP's former deputy leader said his ambition was "to replace the Labour party and make UKIP the patriotic voice of working people."

Nuttall, 39, is a former history lecturer at the Liverpool Hope University. Nuttall was a deputy leader of UKIP and a Member of the European Parliament for the North West of England.

According to his blog, Nuttall's mandate is to do himself and every other British MEP out of a job by getting the UK out of the costly and undemocratic European Union. Paul's constituency covers Merseyside, Lancashire, Cumbria, Cheshire and Greater Manchester.

"Between 75-80 percent, of all UK law now comes from Brussels, yet it is a Union driven by an unelected and unaccountable Commission," Nuttall said on his online blog.

Nuttall added: "I also believe that the EU is incredibly bad for our country's prosperity. We pay £50 million a day to an institution whose accounts haven't been signed off for more than 14 years. We do not need the EU to trade freely with our European neighbors and friends. Countries like Norway and Switzerland thrive outside of the EU and so can we."

Congratulations @paulnuttallukip on becoming the new Leader of UKIP. The right man at the right time.

In his election speech, Nuttall said that he will ensure Brexit is brought about and that those who voted to leave the EU, will see it happen.

"Donald Trump spoke about making America Great again, under my leadership we will ensure that this country gets the Brexit that it voted for and we will then put the 'Great' back into Britain," Mr. Nuttall said in his election speech.

Paul Nuttall has said in one of his articles that the Conservative government was misleading people on the actual number of immigrants coming into the country. Nuttall has made no secret of his desire to control UK borders and reduce the number of immigrants coming in. He backed Farage's controversial anti-immigration poster and has said that control of UK borders is key.

"The point behind that poster was absolutely correct. We do need to get control of our borders and there is a deluge of people coming from the Middle East. And the EU's idea of a common asylum policy isn't the route to go down," Nuttall said when asked for his views on the campaign image.

In now-deleted blog posts on his personal website, Paul Nuttall called for the National Health Service to be privatized.

"I would like to congratulate the coalition government for bringing a whiff of privatization into the beleaguered National Health Service," he wrote.

Nuttall supports Donald Trump and was even bold enough to claim that the US president-elect will end the serious threat of Daesh (also known as the Islamic State).

"I think Trump realizes what the real threat to humankind is in the 21st century. It isn't Russia, it isn't Putin. The Cold War is over; we've done that in the last century."

"The real threat is Islamic fundamentalism, and I would not want to be sitting in Syria or Iraq right now as a member of Islamic State because what I suspect Trump is trying to do, or what I would encourage him to do, is build a global coalition which would include China, include Russia, and get together and focus our fire on the real enemy."

Paul Nuttall, is a bold character who believed that "UKIP has to stay on the pitch and hold the Government to account on Brexit."