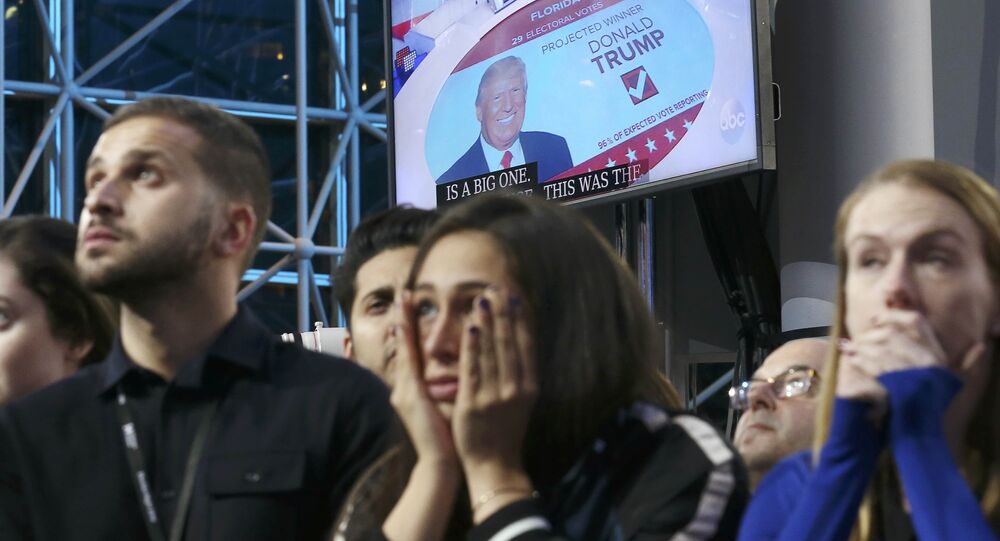 Political leaders in the Baltic states of Estonia, Latvia and Estonia still can't seem to calm down over Donald Trump's victory in the US presidential election. RIA Novosti political commentator Mikhail Demurin suggests the elites' main fear is that the new US administration will stop serving as the "undisputed patron" of these countries.

© AP Photo / Alik Keplicz
The Trump Effect? Germany Urges Europe for New 'Peace Treaty' With Russia
Commenting on his observations of the Baltic countries' reactions to Trump's win, which have ranged from inflated fears of Russia 'planning an invasion', to intensified efforts to cozy up to NATO, to anger over America's expected 'betrayal', Demurin suggested that on first glance, the Baltic nationalists' position seems like a contradiction.

After all, the observer wrote, ideologically speaking, the Baltics' right-wing, anti-Russian position seems "closer to American conservatives, the Republicans, and to Donald Trump, whose discussion of traditionalist [nationalist] views during the election campaign had been maligned by opponents as borderline fascistic."

But as it turned out, Demurin added, "the Baltic fighters for ethnic purity and the 'national ideal' proved to be much closer to Hillary Clinton, who stuck to liberal and globalist, i.e. anti-national positions."

"This says a lot," in the commentator's view, "about the fact that today's Baltic ruling elites' main concern is [preserving the] possibility of using the protection of their foreign patron to show enmity toward Russia and the Russians, and to achieve historical revenge" for the ancestors of those who fought on the side of Nazi Germany against the Soviets during the Second World War. "Of course, there were others in the Baltics who fought against fascism, but they have been deliberately listed in the category of 'occupiers'."

© AP Photo / Ronald Zak
EU Agrees European Rapid Reaction Force Amid NATO-Trump Doubts
"This explosive mixture is concealed by rhetoric about the need to ensure the Baltic nations' sovereignty and security, and to protect them against the alleged threat of aggression by Russia," Demurin explained.

But the reality that authorities in Estonia, Latvia and Lithuania don't realize, or choose to ignore, he added, is that in the event of an actual conflagration with Russia, their territories will be likely be turned into a pile of smoldering ruins, and from US and NATO missiles and bombs at that.

"In my view, the NATO exercises of US B-52 strategic bombers in the [Baltic] region are probably the most significant event in the area of security in recent years," the commentator stressed. "B-52s are the backbone of the aerial component of the US nuclear triad." The drills seem to be an indication that, "in case of a global conflict, the US will 'defend' the Baltics by means of heavy bombing, including the use of nuclear bombs. This has been confirmed by Latvian lawmaker Janis Adamsons."

And this is nothing new, the analyst added. During the Cold War, when the United States refused to recognize the Baltic States incorporation into the Soviet Union, the Pentagon nevertheless "made plans to launch multiple nuclear strikes in the region. As a result, Latvia, Lithuania and Estonia, together with their entire populations, would have simply been wiped off the face of the earth."

© AP Photo / Chairman of the Joint Chiefs
Down but Not Out: Clinton Allies in Congress Plot to Sabotage Trump's Russia Thaw
As far as the impact Trump's election will have on Baltic security, Demurin suggested that it could actually make the Baltics more, not less, safe.

For starters, he wrote, even if Trump cannot fulfill all his promises on normalizing relations with Moscow, his intention to do so in itself sends an important signal. At the same time, "at least some of his promises are likely to be fulfilled, and this will help to decrease tensions, thus raising the level of the Baltic countries' security."

Baltic security will rise, according to Demurin, "not because Russia will give up the aggressive plans attributed to it (such plans simply do not exist). It will occur thanks to a break in the futile effort of injecting animosity" in relations between Russia and Western countries. If the Russia-US détente succeeds, "those in the West who are opposed to Russia will simply realize their powerlessness at some point."

After all, NATO and Pentagon planners never quite could explain what would motivate Russia to lose its mind and invade three NATO members, thus risking nuclear war with the entire Western alliance. Amid improved relations between Washington and Moscow, such a scenario would look even more absurd.

Ultimately, the journalist suggested that banking on detente "seems more reasonable than the ideas of the Baltic Russophobes, who would like to see America drop bombs on the Russians, whether in Russia, Ukraine, or, if so required by the logic of the conflict, on their own countries."