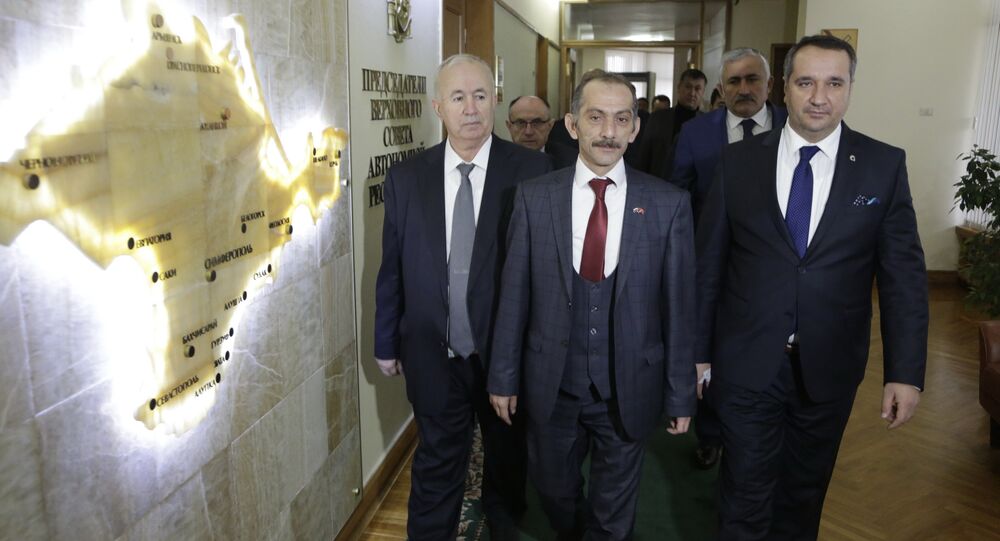 The Ukrainian-Turkish strategic partnership talked about so assertively only a few months ago seems to be coming under strain. On Friday, a Turkish delegation of politicians and businessmen visiting Crimea discovered that Kiev had opened criminal cases against them for visiting the peninsula.

Speaking to Sputnik Turkey, delegation head Hasan Cengiz explained that the purpose of the delegation's visit had been "to strengthen the friendship and sense of brotherhood between Turkey and Russia." Cengiz confirmed that the delegation had received official approval for the visit.

During their trip, the Turkish guests met with the leaders of Crimea's parliament, and took photos against the backdrop of the Crimean Republic's flag and coat of arms. They also visited the construction site of a mosque in Simferopol, and held a meeting with representatives of the peninsula's Crimean Tatar community, who told them that they "hoped that the next step be a formal recognition by Turkey of Crimea's Russian status." Speaking on behalf of the delegation, Cengiz said that he would be thrilled to see Turkish President Recep Tayyip Erdogan and Russian President Vladimir Putin attending the opening of the mosque when it is completed.

© Sputnik / Konstantin Chalabov
Going Out With a Bang: Here's Why Kiev Keeps Provoking Russia in Crimea
Cengiz also made headlines in Russia with his statement that the Crimean people's decision to rejoin Russia in the March 2014 referendum 'should be respected'.

For his part, Ankara deputy mayor Ahmet Tunc urged the international community to pay heed to Ukraine's "inhumane" water and electrical power blockade of Crimea. Ukrainian nationalist activists had knocked down power lines going to Crimea from Ukraine in October 2015, in an effort to cut the 2.2 million residents of the peninsula off from electricity supplies. Russia responded by building an energy bridge to the peninsula, making it completely independent from Ukraine-based supplies.

The Turkish delegation's visit to Crimea did not escape the attention of authorities in Kiev. On Friday, Cengiz confirmed that the visit carried with it certain "risks." "Ukraine is already initiating legal proceedings against us," the official explained.

At the same time, Cengiz stressed that he would not be intimidated by Kiev's threats. "In order to achieve peace, it is necessary to be courageous, honest and have a clear position," he noted.

© Sputnik / Konstantin Chalabov
Going Out With a Bang: Here's Why Kiev Keeps Provoking Russia in Crimea
Ukraine has made a habit of opening criminal cases against lawmakers and businessmen who ignore Kiev's warnings and visit the Russian peninsula. This summer, Kiev opened a criminal case against a delegation of French lawmakers for visiting Crimea. Under Ukrainian law, the officials could face up to eight years in prison if convicted.

If it is confirmed that Ukrainian officials have opened a case against the Turkish officials and businessmen, this may have devastating consequences for Kiev's recent efforts to court Turkey. Last month, the Ukrainian and Turkish presidents had agreed to intensify negotiations on the creation of a free trade zone between the two countries.

Before that, during the period of strained relations between Moscow and Ankara stemming from Turkey's downing of a Russian Su-24 bomber over Syria last November, Kiev even talked the creation of a military-political alliance in the Black Sea, something even many Western analysts admitted to be an outlandish idea. However, in June, Moscow and Ankara quickly began restoring ties after President Erdogan personally offered an apology for the downed plane, thus dashing Kiev's hopes.

If Kiev doesn't back down on efforts to prosecute the Turkish officials and businessmen involved in this week's Crimea visit, its warm relations with Ankara could quickly enter a very deep freeze.

Crimeans' Will to Reunify With Russia Should Be Respected - Turkish Delegation