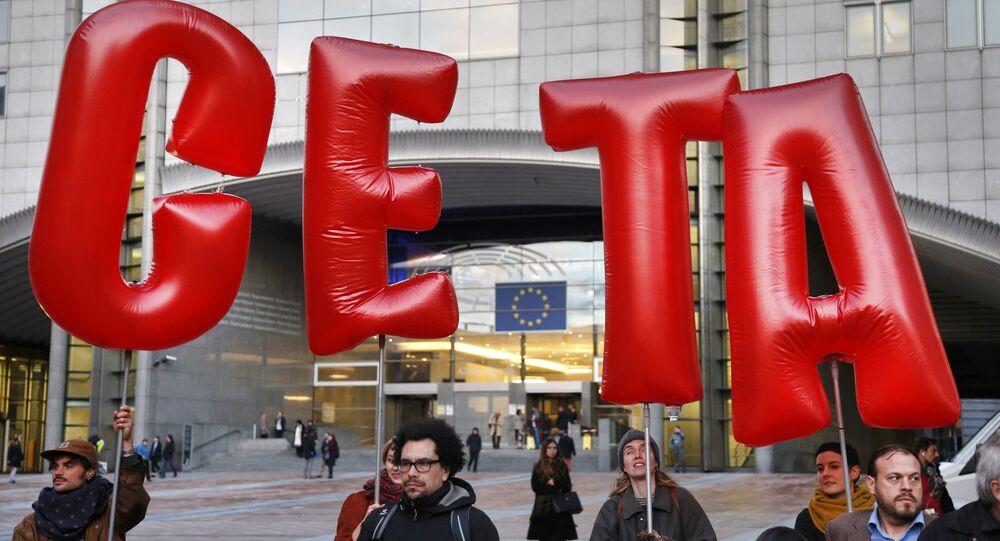 The EU parliament has voted down a proposal to refer the Comprehensive Economic and Trade Agreement (CETA) with Canada to the European Court of Justice (ECJ) over public policy and environmental concerns, the parliament's press office said Wednesday.

MOSCOW (Sputnik) — The proposal lost with a margin of 419 to 258 votes and 22 abstentions, according to the statement.

"Parliament rejected a request by 89 MEPs to refer the EU-Canada Comprehensive Economic and Trade Agreement (CETA) to the European Court of Justice (ECJ) for an opinion on Wednesday," the statement said.

© REUTERS / Fabrizio Bensch
CETA, TTIP Chance for EU, North America to Set Standards for Globalization – Merkel
The motion was filed on November 11, with the parliamentarians questioning CETA's compatibility with governments' right to regulate national economies, as well as the deal's environmental implications.

According to the statement, members of the European Parliament said they found the trade deal would have no impact on EU member states' competencies.

CETA aims to establish a free trade zone between Canada and the European Union, though it has been criticized in Europe. Opponents fear it would undermine standards and regulations on environmental protection, health, safety and workers' rights. CETA has also been legally challenged in Canada, with opponents arguing that the government has no right to sign or ratify major treaties without parliamentary approval.

The deal was signed last month by Canadian Prime Minister Justin Trudeau, European Council President Donald Tusk and European Commission President Jean-Claude Juncker. The EU parliament is set to vote on the deal in December. The European Commission, pressured by France and Germany, has stated that the agreement would also have to be ratified by all 28 EU member states.

In October, the French-speaking Belgian region of Wallonia voted against CETA's ratification.

CETA: How Free is Free Trade?

Iceland’s Election Brings Major Changes| What Next For CETA?